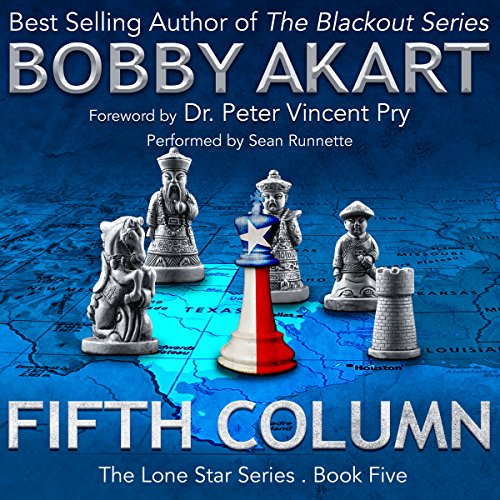 By: Bobby Akart
Narrated by: Sean Runnette
Try for £0.00

Enemy forces gather under the veil of darkness - mobilizing to strike a fledgling nation.

Will this clandestine Fifth Column achieve its acts of sabotage?

Remember, the enemy of my enemy is my friend.

The Republic of Texas has focused its efforts on the survival of its citizens to the detriment of those who seek to cross their borders. When an unforeseen enemy penetrates its defenses, the unthinkable happens, causing the nation to face its greatest test.

Can Texas come together to protect its own? Will the death of one of its own cause turmoil among the ranks? Will the advancing Fifth Column receive assistance from an unlikely source? The Lone Star series continues with Fifth Column.

What listeners say about Fifth Column

Well if “They” really are out to get you are not really paranoid.
Evil is real and how some of these characters started out with good intentions then switched sides is interesting.
Really an excellent series both in kindle books and audible presentations. Of course having Sean Runnette as narrator was a good call.

Anthoer great book in the series. Very remincent of Jericho. Nice that the same voice actor has read them all.

not same level as first books

several logical errors ruin several episods. you get back, but still this book was emty and extended to sell you next book.

All I can say is that Author Bobby Akart is amazing! I think that this is his best series yet. I love the Armstrong ranch and the Armstrong family. Read this series.

Again I have been left on the edge of my seat!Great story and can’t wait for the next installment. This series as with all of Bobby Akart books is one of the best!

This is a great series but alas I must quit.
I couldn't get that second mortgage thus I cannot afford the $15 credit I am forced to use each month with a new chapter coming out.
Clearly being dished out for maximum $$
Sorry, I'm no sucker.

On the edge of my seat reading.

Really good stuff, although it is a bit slow and over wordy in parts, what with being overly descriptive at times. Or possibly repetitive. I was on the edge in the beginning, then...Well I do love this series is all I can say.

I like the story line a lot. But the publisher is getting greedy, breaking the books up into short stories. Not worth a credit each. Ill stop the series now.

He did it again

I wish I had the exact words to describe this book, this series so far. By far the BEST series I have listen to and I am not just saying that because I am a Texan American! This is an edge of your seat wanting more story. I can not wait for more. P.S. Dang you Holloway!!!!!!!!