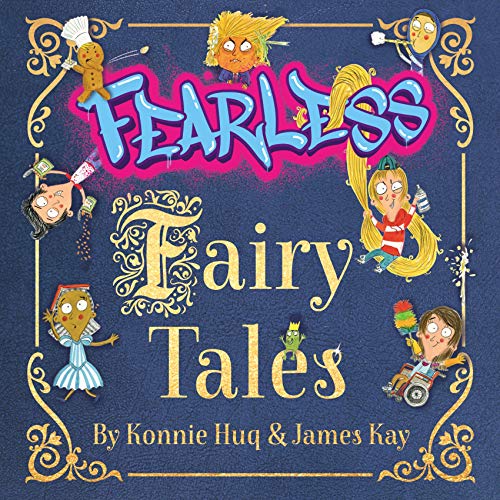 Fearless Fairy Tales is a hilarious and anarchic collection of classic bedtime stories for young listeners, all utterly updated for a new generation.

Meet Trumplestiltskin, a vain and gold-obsessed little man who will stop at nothing to become richer and richer. There's Sleeping Brainy, the princess whose only dream is to become Chancellor of the Exchequer, and the Gingerbread Kid, who escapes persecution in his home country but struggles to fit in in his new one. You won't forget the lingering stench of Mouldysocks - a boy obsessed with staring at his iPad but rather less obsessed with personal hygiene - and you'll be rooting for Rap-Unzel when she gets the chance of fame by appearing on Kingdom's Got Talent...but at what cost?

Packed with stories about boys who aren't afraid to cry and rhymes about girls who refuse to kiss frogs, Fearless Fairy Tales shakes up dusty, old-fashioned (and, to be honest, rather sexist) bedtime stories and totally reinvents them for the 21st century. From fake news to female footballers, environmental pollution to equal pay, nothing is off limits in this anthology of laugh-out-loud fairy tales with thoroughly modern morals.

Told in the fresh, vibrant and unique voice of Blue Peter favourite Konnie Huq and writing with James Kay, Fearless Fairy Tales is the perfect gift for young listeners (and older listeners fed up with serving their kids the same old boring bedtime stories).

Huq (and Kay) give us familiar tales and characters but each with a contemporary spin, making them feminist, education-focused, but still hugely fun.

Princesses aren’t interested in dresses and balls - they want to be Chancellors of the Exchequer. Goldilocks is now MouldySocks, Rumplestiltskin is given a Trump rebranding. Spinocchio shows us fake news lies in action, Jack has a Baked Bean stalk.

Stories gives us modern-day issues, with familiar heroes but acting in ways you’d not dream of in fairy tales - there’s backbone and brains a-plenty, emotions shown. And I loved the authors’ regular insertion of science facts, English terms, even some maths and general knowledge facts.

Some of these tales take the form of poems, all nicely constructed and easy to follow, good rhymes. The narrative stories are of varying length but each will capture the attention of a reader, they are amusing in the differences they’ll spot from the ‘originals’ and with subjects and characters less wish-washy than you’d predict, great for the older primary market.

Inspiring at times (girls can be good at maths!), entertaining and a reminder that nobody needs to conform to expectations. The author reads her own book and I enjoyed listening to these stories read aloud, she’s a reassuring voice and it’s like bedtime for an older, wiser reader.