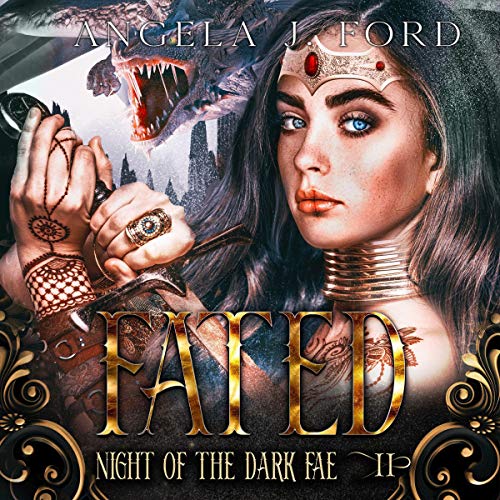 After being devastated by the Dark Fae, Maeve is forced to continue working for them. Her newfound knowledge causes even more confusion and she’s haunted by nightmares that just might be from her past.

But that isn’t her biggest problem. Maeve is left in orc territory and forced to trust two brothers she has an uncanny attraction to, even though they just might be her worst enemy. Along with a beast she should kill — but can’t bring herself to — Maeve’s adventures come to a startling twist when she reaches the kingdom where she was born.

Set in an expansive fantasy world with monsters, magic, and mysteries, the Night of the Dark Fae series is an epic fantasy trilogy birthed from the mind of International best-selling Author, Angela J. Ford. Listeners who love action, adventure, romance, sword and sorcery will be held captive by this series.

Other books in the Night of the Dark Fae series:

What listeners say about Fated: An Epic Fantasy Trilogy

I’m really enjoying this series. Maeve is coming to grips with falling for someone, her past and her calling. The love story is a bit dry, but I appreciate it because not every love story is so sappy as most books show. The narrator does a good job. You can decipher who is talking and she maintains a good pace and inflections. I’m ready for the next part of the series!

Even better then the first book great story very entertaining can't wait to hear the series I received this audio book free for an honest review.

The past finds Maeve

This was another amazing book. I am really enjoying this series. I listened to the whole book in 1 day. The characters are unique and described well. The plot interesting. There is a lot of action. Maeve is growing into her powers, learning about her past, and finding love. The dragon is maturing also. They split up to go on their own journeys. Maeve has found all the shards. Now, the true test begins. I recommend this book to those who like action, mixed with adventure. This is a Fae fantasy book with magic and a variety of races.   The narrator did a great job. Her voice is appealing and she does a great job differentiating each voice. I enjoyed her reading

The story continues as Maeve continues to look for the stones for the dark fae. I really enjoy the series and the darkness of the fae. Angela has done an amazing job with this world!!

Can't wait for the finale !

Maeve continues to do the bidding of the dark fae in this sequel to Pawn . I loved seeing this world through the eyes of Maeve and her friends . The narration was also very well done and I had no trouble differentiating between the characters .

So good I listen to it twice!

I just can’t get enough of the epic fantasy trilogy and can’t wait for the third installment. Once again Angela. Ford has written another great segment that takes the reader inside the story and into the characters themselves. Raquel Beattie has done a wonderful job and her narrations using her voice to her best advantage to make the the characters come alive and the listener to be able to distinguish between the characters.

I can’t wait for the finale!

Maeve is a powerful warrior with superhuman strength but she isn’t free. The fae have her collared and in a catch 22. If you love Lord of the Rings but want a heroine & female narrator, this is your book! I love the plot, the character development and how everything comes full circle. It’s excited to think of the next and final chapter. Can’t wait!

Second book in the trilogy

I liked this newest installment of the series. It didn’t grab me as much as the first book but I will definitely be reading or listening to the final book to see what happens. I did receive a copy of the audiobook in exchange for an honest review.

Throughly enjoying this series! I made comment in my review of book one that it's got a Throne of Glass feel, well I still feel like that statement is a good fit. The characters develope very smoothly in this book as you learn more about them and their world. Narrator did a great job of adapting to each character.

Maeve continues her journey to find the seven chards of the crown which will spell victory or Doom. It's one challenge after another without a lot of good decisions along the way. I could bear the 6 hours of the first book, and another 6 for this one, but the ending is again a cliffhanger. I guess the 3rd book will finally bring the tale to an End!?!

freedom at what cost; Maeve starts to remember parts of her past while continuing her quest (for the dark fae) to find the seven shards.