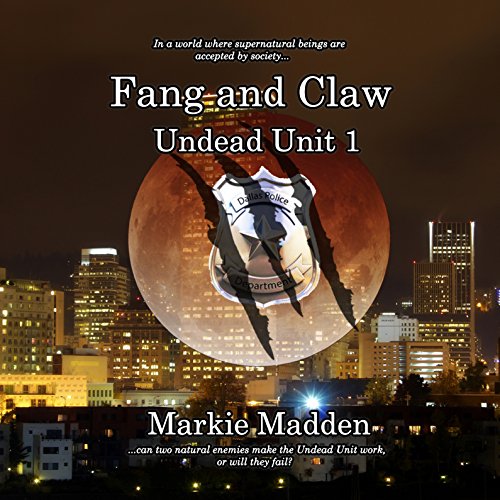 By: Markie Madden
Narrated by: Sallie Downing
Try for £0.00

Lieutenant Lacey Anderson of the Dallas Police Department heads up an elite new squad dedicated to solving crimes involving immortals like herself. Lacey, a vampire left for dead when her family was slaughtered by werewolves, still has nightmares about the attack.

Detective Colton Scarber is her unwilling partner and second-in-command. He's a werewolf, a descendant of those who killed Lacey's coven. She's unaware of this, but she doesn't trust him from the start. When the fragile beginning of the team is threatened by the truth, can they learn to trust one another as partners must, or will the Undead Unit be doomed to failure?

A mysterious suspect and strange physical evidence leads them to solve a case spanning decades, and leaves Lacey with no other choice but to rely on her enemy when her very life is at stake!

What listeners say about Fang and Claw

This audiobook was great The relationship between Lacey and Colton is laid out in perfect detail. The supernatural element was almost irrelevant, the characters became so human in my eyes! Even during slow moments, the characters kept the story interesting,

I really liked this first book. It has sci-fi elements to go a long with the paranormal aspects of a world 100 years away. Here all the monsters we know about as fantasy, like vampires and werewolves, are real. They get around in intelligent cars, and work together to solve paranormal crimes. In a way, this is the anti-monster hunters international, by Larry Correia fame. Here, the monsters legally hunt humans and monsters alike when a crime has been committed. So, I guess it might even have a feel sot of like the TV show Grimm, but I never watched that, so it is just speculation.

A case gets dropped into the laps of two feshly partnered Paras. One, a vampire, and the other a werewolf. he vamp doesn't trust the wolf because her family was slaughtered by werewolves, and guess the partner's connection to the crime. Yep, he's connected to those who did the killing, only she doesn't know that. She doesn't trust him at all, and this new case really puts a strain on the pair.

Downing is good as the narrator, but there were a few spots where her narration seemed spotty, alomost like she started a sentence, flubbed it, and over dubbed. Maybe that is just how she speaks, but Iheard it enough to be jolting. So, I cut one star from her performance. Sorry, Sallie. Otherwise, she does a fine job, and embodies the characters well.

It took me a bit to get into this book, but it picked up after a few chapters. Once it picked up, I really enjoyed it. I look forward to the next in the series! The narrator is a wonderful narrator, however, her voice or performance didn’t quite match the book and characters for me, she sounded too sweet and nicety nice, as if she should be reading a children’s book. I received a review copy at my request and voluntarily reviewed.

Great start to an orignal series!

Imagine a world about 100 years in the future, where cars drive themselves, technology is more advanced, but all in all, its recognizable. Oh, did I forget to mention that supernatural cratures, like Werewolves and Vampires, among a host of others, are now out in the open and are accepted members of society? Thats where the story begins in Dallas, as vampire detective Lacey Anderson is put in charge of the newly formed Undead Squad, formed to deal with strictly supernatural crimes. She is partnered with Colton Scarber, an irracible Werewolf. This is an uneasy parnership, since Vamps and Wolves dont really care for each other generally. Also, Colton's pack was involved with an earlier incident in Lacey's life that has left her traumatized still. They immediately pick up a case where a woman has been assaulted by a supernatural. So begins a wild ride of a book that reads like a hard boiled police procedural, only with Supernatural creatures! The search for the culprit takes all their skills and knowledge, including something Lacey saw 500 years ago, and leads to a thrilling conclusion! Along the way, Lacey and Colton have to face their shared past and find a way to deal with it while working as an effective team. All in all, extremely well done!
The plotting and pacing were excellent, and you can tell the author has either researched extensively or has a Law enforcement background. Having such long lived characters also allows for interesting flashbacks, and the settings, from renaissance era Greece to future era Dallas are well drawn out. I really enjoyed the byplay between the two main characters as they each learned each others strangths and how they complimented their own.
As far as narration, Sallie Downing did a fine job bringing the various characters to life. She gave them each their won voice, even minor characters, and her pacing was excellent.
I give this book my highest recommendation, and it should please both urban fantasy fans and even fans of stuff like the Harry Bosch books.

I was voluntarily given a copy of this book by the Author, narrator or publisher free of charge through Audiobookboom.

While this book was not really my cup of tea, I will say that it was a well written book. It is your typical Police Procedural but with the added bonus of vampires, werewolves, and zombies. If you like shows like Law and Order, etc., you will love this series.

Fang and Claw
The Undead Unit, Book 1
By: Markie Madden
Narrated by: Sallie Downing
A vamp and a werewolf get assigned to a new unit to deal with the supernatural or undead population. Neither want to work with each other. The book follows their cases, their relationship, and career. It is very interesting and there is NO romance between them. Just a good story.
The narration was good.

Wow! I love this book. Great adventure! Lots of action. No dull moments. Worth it....

Interesting story of a new paranormal squad of two detectives investigating paranormal related crimes. The characters and storyline are well developed. The detail of police procedure relays the author’s commitment to police procedure research and partnership bonding. Overall I enjoyed the story and the mystery unraveling was well done. I received a free copy of this audiobook at my request and have voluntarily left this review.

3.5 stars. I really enjoyed this paranormal police procedural mystery. I liked the idea of the Undead Unit for crimes involving the supernatural. I really liked the dynamic between Lacey and Colton as partners. Their backgrounds were very detailed and well thought out. The mystery itself was good but could have been a bit more exciting. Overall I enjoyed the audiobook. The narrator did a ok job. Each character was easily distinguishable though I do think that a little more feeling and enthusiasm could have added to the story. She was a bit monotone. I’m excited to listen to the next in the series especially after hearing the teaser at the end of this book. I’d like to see how Lacey and Colton continue to work together and what new paranormal mysteries the author comes up with.
I would like to thank the author/narrator/publisher for generously providing me with a copy of this audiobook in exchange for an unbiased and honest review. All thoughts and opinions are my own.

I found Fang and Claw to be a really good book. I really enjoyed the two main characters Lacey a vampire and Colton a werewolf. I am looking forward to listening to more of this series as they come out.

Not a traditional Vampire/Werewolf Story

Narrator does an excellent job with the voices of different characters. I think we are generally used to vampires and wolves being enemies, and there is some of that here. But here you have a vampire and wolf cops working as partners . Good plot, good tension.