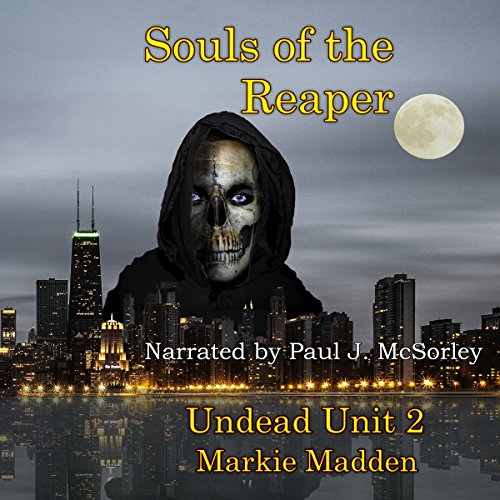 Souls of the Reaper

By: Markie Madden
Narrated by: Paul J. McSorley
Try for £0.00

The Undead Unit series: A hundred years in the future, it’s a world where supernatural beings live among humans. Of course, they’re forced to take the Undead Oath; they must not prey on humans for food. Just as with other minorities, they battle prejudice and must struggle to prove themselves. Alongside the humans’ bigotry is a criminal element, as seen in any group in society. The Dallas Police Department sets up an elite new squad of Immortal detectives and officers, dedicated to solving crimes among the Undead. Headed by veteran Lacey Anderson, can the Undead Unit overcome its obstacles, or is it doomed to failure?

A rogue Reaper is on the loose in the city of Dallas. Su Xiong is a sociopath with no care for human life. He steals souls whose numbers are not yet up in order to become a more powerful Immortal.

While he's on the prowl to gain power, his soulless victims roam the streets without morals, without inhibitions, without any code of conduct or social mores. Crime has risen tenfold: petty crime, road rage, prostitution, drinking, and gambling. But for each soul that he captures and keeps, his own mental stability behind to degrade, a fact that Xiong is dangerously blind to.

Can Lacey and Colton, along with Doctors Matthews and Dilorenzo, find him, and stop him, before the insanity inside spoils the souls he holds within?

What listeners say about Souls of the Reaper

Very good story and outstanding performance of Paul j Mcsorley.
" The Undead Unit series: A hundred years in the future, it’s a world where supernatural beings live among humans. Of course, they’re forced to take the Undead..."

The Undead Unit series: A hundred years in the future, it’s a world where supernatural beings live among humans. Of course, they’re forced to take the Undead Oath;
great book got me hocked from the start

Back for another BITE!!!!

Book two of the Undead Unit is out at last, and I am thankful, as I have missed the team. There are some changes, too. Our Vivacious vampire and werewolf have another member added to their team, and man do they need all the help they can get. Lacey and COlton are just starting to get along, and now they have to contend with Kazz, an eager beaver that actually fits in with the pair.

One thing I like is that this actually has more focus on the police proceedural part than the paranormal. Not to say that there isn't occult aspects to the story, but usually this sort of stuff gets brushed aside in favor of the less mundane parts of the story. You could say this is sort of like NCIS or SWAT injected with the otherworldly, and you'd be right on point.

I also liked starting the book out in the bad guy's POV. It added some dark element and let you know right away what was going on, so you were one up on our undead team. Everything comes together in short time. The action blasts off, the mystery of who and where the baddie is, and the new dynamics of the team all mesh flawlessly as the plot progresses. It is another fun ride, and I am really starting to like this series more and more.

Another change that we have is that we have a new narrator. Ok, he's not new. The man is a seasoned pro, and does some incredible work in other things I've heard him do, but he just got onboard this undead unit, and we are lucky to have him.

Who am I talking about? Why, Mr. Paul J. McSorley! I think there were some issues with the original narrator (poor editing if you ask me), and Madden was lucky enough to snag McSorely to this gig. I hope he stays. I mean no disrespect to the other reader, but McSorely really brings some life into the series. There is a vibrancy, and an urgency here that wasn't before. He really has the pacing down, and his cadence fits right in with the characters. Give him another book or two, and people will be wanting him to reread book one like they did when Glover read Ghost Story in the Dresden Files instead of Marsters. He really added to the whole ambience of the book, the characters stand out and have deeper personalities, too. Even though I did receive a promo code for this review it in no way influenced my considerations of the material, and in fact, inspired me to be more honest. In fact, getting a code generally makes me harsher as a reviewer as I am more often concerned what someone like Me will decide based on my review.

I didn't listen to the first book in this series but I didn't feel like that was necessary to understand what was going on. Markie Madden has incorporated a "real feel" to this fantasy/horror series. The writing was well done. There is quite a bit of science in this book also to the point that it had a science fiction feel to it. The accuracy of that science was beyond my scope of education but it made for a very good audiobook. I was disappointed to see that the rest of the series wasn't available.

If there are plans to record the next two in the series, I certainly hope Paul J. McSorley is the narrator as he did an wonderful job. I've listened to other books McSorley has narrated and he is a good match with this book. I had to stay up until morning so I could finish this. Wonderful writing and great narration.

I'd highly recommend this series to anyone loving mystery, police procedural's or fantasy. Very well done.

Another great police vs. immortals story

I enjoyed the first one. I also enjoyed this! Never a dull moment. Lots of action and adventure.

Book 2 of the Undead Unit series is a good detective/ mystery story involving a search for a unique troublemaker. The entire story’s focus is on one specific case. The characters and the storyline are well developed and interesting. This is the first audiobook series that I didn’t mind/find it irritating to have the narrator change. Mr. McSorley did a nice job!

Great second installment to the series

Great second installment to The Undead Unit series. I enjoyed this one more than the first. It flowed much better and the story’s pace was nice and steady. The concept of stealing souls was done in a really original way. One thing that bothered me was that Asians were referred to as Orientals which now a days is not very PC. Asians are people Orientals are carpets. Other than that it was a well put together book. I can’t wait to move onto the next in the series.
The narrator did a nice job of distinguishing between the different characters though he could have put a bit more enthusiasm and emotion into his portrayal of them.

I would like to thank the author/narrator/publisher for generously providing me with a copy of this audiobook in exchange for an unbiased and honest review. All thoughts and opinions are my own.