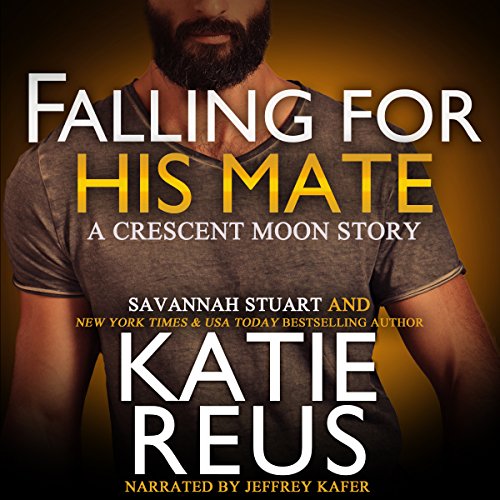 Falling for His Mate

Falling for His Mate

Second in command of the O'Shea wolf pack, Andrew Reid screwed up and let Charlotte walk away from him. Now that he's come to his senses, he's determined to win her back, no matter how much he has to grovel. Because she's a woman worth fighting for.

She's not willing to trust him again.

Charlie thought Andrew was different from other males, that what they shared was real - that their connection was the rare mating pull. But a true mate wouldn't have ghosted on her the way he did. So no matter what he wants, she's not playing his games. To capture her heart for good, he'll have to prove he's worthy of a second chance. Even if that means he has to give up everything, including his pack.

Author note: all novellas in the series can easily be listened to as individual titles. There are no cliffhangers and each story has a HEA.

This is a second chance story between Andrew &amp; Charlie. They both met when she was visiting her friend from another pack, as is the shifer way the attraction was instant and intense but Andrew messed up by not staying in contact when she had to go home......Realising he couldn't live without her he set about winning her back.This little novella is an enjoyable story and a good addition to the Cresent Moon series.Copy courtesy of author in exchange for an honest review.

Would you be willing to try another book from Katie Reus and Savannah Stuart ? Why or why not?

Ms Reus is an auto-buy author.

Very good story I love everything Katie writes. This is a very sexy shifter romance with a good storyline. I like it when men mess up and have to play nice to fix their mistakes. It's fun to watch their ever increasing antics to get out of trouble. The presenter did a great job I really love his voice. It really is very well suited to Kate's books.

I really liked this novella, i love paranormal romances and this was perfect for in-between, quick books.

This is a great book; this is the sixth book in the Crescent Moon Series written by Katie Reus, Savannah Stuart and narrated by Jeffrey Kafer. Second in command of the O’Shea wolf pack, Andrew Reid screwed up and let Charlotte walk away from him. Now that he’s come to his senses, he’s determined to win her back, no matter how much he has to grovel. Because she’s a woman worth fighting for. This is a great book with a wonderful story and well developed characters. The story flowed very well and was very enjoyable. This book will keep you reading long into the night and you will not want to put this book down until you finish. This was such a great read and full of surprises. The narrator did a wonderful job with this book. She did a great job with the different voices of each character in this book. It was very easy to listen to and I didn’t want to stop listening until the end. If you are looking for a great book with well-developed characters then you need to listen to this book. I am looking forward to listening to the next book by this author and narrator.

Falling For His Mate

FALLING FOR HIS MATE by Katie Reus
This is the latest installation of the Crescent Moon Series by Katie Reus also known as Savannah Stuart. This is a second time romance story of Andrew and Charlie (Charlotte). Andrew screwed up and let fear separate them, realizes his mistake and wants her back. She has to work her way back to forgiving him. This series is always a great read. This one has Jeffrey Kafer narrating, he has an awesome voice, I could listen to him read anything. I did think this was a very short story.

Getting A Second Chance

Andrew Reid is second in command of the O'Shea wolf pack. He's a strong Alpha who is never afraid. Until he falls for Charlie, a member of the Kincaid pack. He breaks his word to her and walks away, but he can't forget her. He has to make her forgive him. He wants to claim her as his mate. Will he be successful? Andrew is a powerful wolf shifter. I liked that he knows he was wrong and is willing to admit that he made a mistake. When he confided in Charlotte why he ran and what he fears, I was impressed. Charlie's heart is broken. She fell for him yet he walked away. Seeing them work through their problems pulled me in. I enjoy reading Katie Reus. She creates action packed and romantic stories that I liked. All the characters are larger than life and add to the action. The isolated setting helps create a suspenseful atmosphere as does the snappy dialogue. I'm enjoying the Crescent Moon stories. They're a nice combination of action and romance. The narration by Jeffrey Kafer is perfect. He adds to the excitement and suspense that I found in Falling For His Mate.

I love this series and really loved Andrew and Charlottes story.
The narrator does a fantastic job and is clear spoken.

Would you listen to Falling for His Mate again? Why?

Yes. To be honest I would listen to Falling for His Mate and the previous audiobooks in this series. I enjoy Mr. Kafer's portrayal of all the characters.

What other book might you compare Falling for His Mate to and why?

I wouldn't really compare any book to this one but in my opinion if readers enjoy this audiobook I think that they would enjoy the previous audiobooks in this series and most definitely enjoy other paranormal books written by this author.

I enjoyed all of the character's but if I had to pick one I would say Andrew, simply because this was his and Charlie's story so they were the main characters and I've wanted his story for a while.

Jeffrey Kafer does an excellent job with the narration of this book. He brings the characters to life with the narration of the book. This book is written by Katie Reus writing as Savannah Stuart. The story centers around Andrew (second in command of the O'Shea pack) and Charlotte, a member of the Kincaid pack. Andrew and Charlie meet while she is visiting a fiend, who is also a member of the O'Shea pack. They spend a lot of time together and Charlie thinks that they have something special. Andrew gets scared and &quot;ghosts&quot; on her.
He finally comes to his senses -- and wants to make it up to Charlie and win her back -- this is technically where the book begins -- you learn the rest as back story. I was able to listen to this novella in one evening. I would recommend it for an evening listening escape. Wear headphones -- there are some non-PG parts.