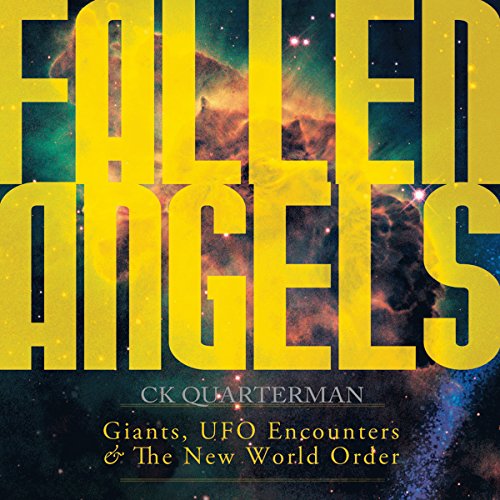 One of the most fascinating and strategic topics in ancient texts is the record of fallen angels, giants, and UFO s. Fallen angels and giants are shrouded in mystery and belong to the age of pyramids and other great wonders of the world. It is an epoch that was destroyed by God s judgment, a flood, which left the world everlastingly changed, the evidence of which is found in the tales, folklore, and traditions of many cultures around the world.

There were giants in the earth in those days; and also after that, when the sons of God came in unto the daughters of men, and they bare children to them, the same became mighty men which were of old, men of renown (Genesis 6:4).

This vivid language defines the conspiracy of evil which has beset our world. The ancient books, Enoch and Jubilees, tell us of a race of Nephilim, which are hybrids, alive in history and today, fathered by fallen angels. Strange as this may seem, the Lord declares that this conspiracy of evil is to be repeated before His return. Consequently, it is important from the standpoint of both understanding history and understanding the future that we understand these events.

The world is in a slumber, asleep with the dream of a better tomorrow. While dark forces of fallen angels are arrayed against us, many today write about the approaching juggernaut of the apocalypse and well they should! Few, however, know or understand that fallen angels have brought us to this apocalypse, this apex of human history.

The end of the world as we know it is about to take place. A storm is gathering, so terrible as to cause men's hearts to fail them for fear; we must not approach this coming apocalypse unaware and unarmed.

Not the best, not the worst.

I've read a lot of books related to this particular subject. I would say this book falls somewhere in the middle. This was definitely a perspective from the point of Christianity using both the Bible and some of the apocryphal writings. He did site many of these writings, but it did seem that he filled in a lot of the gaps with his own assumptions; sometimes logical and sometimes not. It is a huge subject and the author gave a pretty broad overview starting from billions of years ago to now. I would say this is more of a quick introduction to the subject. I thought he did a great job on dealing with the age and history of the universe, specifically our own solar system. His perspective is not common in Christian circles (but makes the most sense if you can get past the literal 6 day thing in the first chapter of Genesis). However, I did find his explanation of "why" the fallen angels left their original habitation to manifest physically a bit weak. Although I don't think he was completely wrong, I believe that there was a more sinister and vindictive reason that goes back to the curse that God placed upon Lucifer after he deceived human kind.
This was not a bad listen. There are better books out there, but unfortunately they are not on audible.

Excellent summation of many books I've read on fallen angels. The authors personal experience was disturbing. I've read of similar encounters but this one is most credible. What lurks in the shadows?

The Narrator. The way that the story was delivered will keep anyone hungry for omore.

The Book is an eye-opener and I rejoiced in the truth.

Would you consider the audio edition of Fallen Angels: Giants, UFO Encounters and the New World Order to be better than the print version?

the entire book is good and worth the price. i believe all those who wait for the second coming or people who view Bible as a old story for the aged should read this book.

UFO coverage was inadequate. There should be more coverage on books of Jasher & Enoch from a historical perspective. Gnosticism should also have been unveiled as a credible threat.

The narrator read it like it was his story. This book ties a lot of facts I've heard but was never able to put together. I highly recommend this book.

This is the first book that I have listened to using the audible app. It was something new for me, and since I do a lot of long distance driving every week, it won't be my last. I found this book very helpful in understanding several of the subjects addressed. I had already come to some of the same conclusions about these matters, which are addressed very thoroughly in this book. I really liked the way C. Quarterman explained the subjects by referring not only to the various extra-biblical text, but also scriptures from the bible. I found it very comforting to know that I am not the only person that believes some of the theories he speaks on, especially on the UFO's the New World Order. If you are looking for a book to to better understand the Fallen Angels, UFO's and Giants, then I highly recommend this book. However, you must approach these subjects as one genuinely seeking the truth, and put aside any theories or conclusions you may have already come to. You will be challenged, but in the end you will have much clearer picture than when you began.

good all the way around could listen to it again.very in tasting. I give it two thumbs up

Not sure why there are people that gave this anything less than a 4.5. This book really connects the Bible, the book of Enoch, and other information and makes it simple to understand.

This story helps a person to initially open their eyes and heart to a world that tries to stay hidden. A must read but a start to a life endeavor.

this book definitely answer questions about things that you wonder about. Such as, why were there only a few scriptures in the Bible that spoke about the Giants and nothing else was ever said . so this book helped to pick up some pieces that appear to have been missing, or lost answer to many questions.. . . The Book of Enoch The Book of Jubilees, and etc. Though these have been uncovered still it appears that these holy scripts are being covered up and hidden from us. What is it thst satan does not want to see ... they do not want us to know what was happening and what was inhabiting the earth before the flood because it is going to happen again. I am glad that the author of this book is sounding the alarm but I am sad because not very many believers are hearing it. And those we depend upon as watchmen on our walls are either ignorant; or , are part of the cover up, It is time to call upon the King of kings, Yeshua!