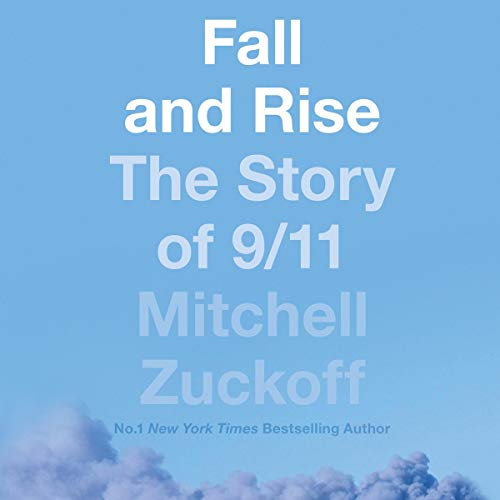 The New York Times best-selling author of 13 Hours and Lost in Shangri-La delivers his most compelling and vital work yet - a spellbinding, heartbreaking, and ultimately uplifting narrative, years in the making, that weaves together myriad stories to create the definitive portrait of 9/11.

In the days after the September 11, 2001, terrorist attack, then-Boston Globe journalist Mitchell Zuckoff led a team that reported and wrote the lead news stories and a series of pieces about 9/11 victims and their families. It was the beginning of an obsession with that momentous day and a commitment to tell its complete true story.

Fall and Rise is a 9/11 audiobook like no other. Based on years of meticulous reporting, it gives voice as never before to both the lost and the saved. Zuckoff masterfully braids the stories of what happened in New York, Washington, DC, and Shanksville, Pennsylvania, into a mesmerizing account that details the minute-by-minute experiences of those whose lives were forever altered by that day.

Zuckoff puts us in the center of events with numerous men and women caught up in the terrible attacks - beside a young, out-of-work actor stuck in an elevator in the North Tower of the World Trade Center; among the heroes aboard United Airlines Flight 93; inside the badly damaged Pentagon with a veteran trapped in the inferno; accompanying the first firefighters on the scene in rural Shanksville; in the company of workers at offices in the World Trade Center; among a team of New York firefighters racing against time to save an injured woman and themselves; and alongside families flying to see loved ones across the country who suddenly face terrorists bent on murder.

Fall and Rise opens new avenues of understanding for anyone who thinks they know the story of that tragic day and illuminates as never before the extraordinary ordinary people from all walks of life caught up in tragic circumstances they could neither understand nor control.

Destined to become a classic, Fall and Rise is a tribute to the dead and the living and a testament to the power of the human spirit to triumph even in the darkest hour.

Fall and Rise will include a 16-page photo PDF.

I enjoyed this book very much, it is well written and well narrated. I do wonder however, how the author manages to obtain such intimate, accurate and nuanced accounts of events. Right down to exact words spoken. Was a little artistic licence applied here?! It's fairly typically American in that there's plenty of schmultz, and look out for two interesting lines "Casseroles and Condolences" and the narrator refers to someone as being a "First Plass Cassenger" and carries on reading!! All of this said, it's a riveting and moving read. You may shed a tear or two. Would definitely recommend this book, and I'm a cynic who wonders about the conspiracy theories. It was a day in history that will have us talking for many years to come. RIP to those who perished on 11th September 2001.

A heart-wrenching account of the last days of some of the individual victims of 9/11 and the terrible events they faced on that fateful day. Very well written.

Unbelievable account of 9/11 using primary and secondary sources. It really stays with you.

At 17 hours long I almost passed this title by, but I’m so glad I didn’t.

From the off I found this to be a compelling listen which I devoured in less than a week.

The author nicely weaves fact, and background information on some of the days participants together to form what I consider to be a definitive account of that incredible day which unfolds along a timeline and at a nice pace.

Narration was good and delivery wasn’t laboured or tedious which helped keep me engaged for the books duration.

There are no words...

A beautifully written, yet extremely painful journey through that single day that changed everything. The way Mitchell reads this is with deepest respect as so many deserve.

A faultless description that once listened to will change your perspective of life forever.

Very annoying narration, but also felt the book focused on too many people to connect