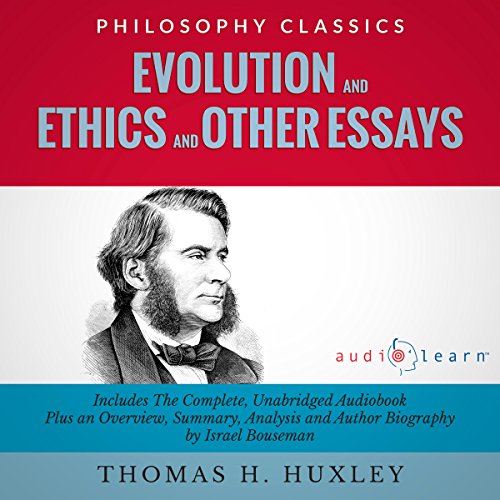 Evolution and Ethics and Other Essays

Thomas Henry Huxley was a prominent member of the scientific community and an early advocate of evolutionism. His work and public debates served to explore this idea and to usher in widespread acceptance, forming the foundation of our current understanding of biology and the place of man in the cosmos. Evolution and Ethics is a work which highlights the ethical and theological implications of the theory of evolution. This work is a compilation by Huxley of his grandest and most sweeping work, that which had the greatest social impact. He was a well respected man, highly visible to the public, and a key figure in the establishment of scientific professionalism. His work reflects the movement to scientific materialism which supplanted the religious perspective as the dominant viewpoint among European thinkers. The narration of the full text of Evolution and Ethics is preceded by a summary which includes a biography of the author, an overview and a synopsis of the work. Also included are an analysis and an investigation of the historical context, criticisms, and social impact evoked by the work. Evolution and Ethics is one of the key works which fosters an understanding of the impact which the theory of evolution had upon society in and the theological implications of this revolutionary perspective.

What listeners say about Evolution and Ethics and Other Essays

Read by a bad text to speech program

When i buy an audio version of a public domain text, i expect it to be read professionally. You can pick up badly narrated books for free from sites like librivox. This is even worse than that! I'm legitimately unsure if a person is reading it or if it's a text to speech program. This will teach me for not listening to a clip before purchasing an audiobook!

The book itself i can't rate because i'm incapable of getting through 10 minutes of this. I've read some of Huxley's shorter essays and greatly enjoyed them so the text is likely good if you can put up with the awful narration.