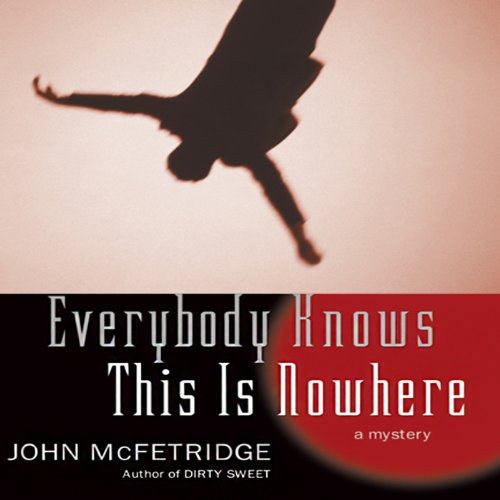 Everybody Knows This Is Nowhere

The action in John McFetridge’s Everybody Knows This Is Nowhere doesn’t stall for a second. Paced expertly by the casually cool and masculine delivery from veteran performer William Dufris, this audiobook cements the early career claims of McFetridge being a young Toronto version of Elmore Leonard. Focusing on the lives of the troubled Sharon MacDonald and Detective Gord Bergeron, McFetridge has crafted a thrilling adventure full of unexpected twists and a heart-pounding climax. This witty thriller is bound to keep your hand frozen atop the pause button until it’s chilling end.

Sharon MacDonald has a problem. It’s not being under house arrest. It’s not the Iranian guy who just fell from the 25th floor of her apartment building. It’s not even the police surveillance that’s preventing her from getting to her marijuana grow rooms. Sharon’s problem is a stranger named Ray: He’s too good looking, and his business proposal sounds too good to be true.

Detective Gord Bergeron has problems, too. There’s his new, hard-to-read partner, Detective Armstrong; a missing ten-year-old girl; an unidentified torso dumped in an alley; and what looks like corruption deep within the police force.In a city where the drug, immigration, and sex industries are all inextricably intertwined, it’s only a matter of time until Sharon’s and Gord’s paths cross and all hell breaks loose in this pitch-perfect second installment of John McFetridge’s rollicking noir series.

What listeners say about Everybody Knows This Is Nowhere