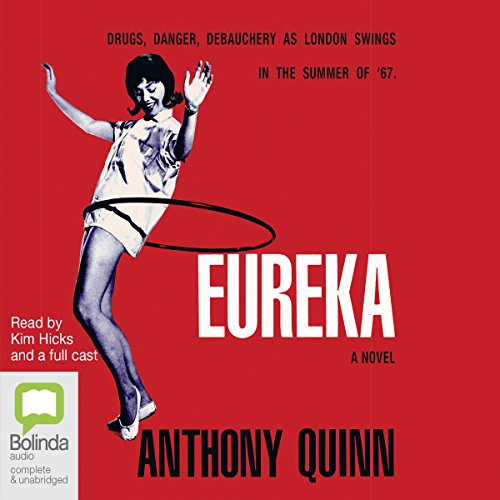 By: Anthony Quinn
Narrated by: Kim Hicks
Try for £0.00

Summer, 1967. As London shimmers in a heat haze and swoons to the sound of Sgt. Pepper, a mystery film - Eureka - is being shot by German wunderkind Reiner Werther Kloss. The screenwriter, Nat Fane, would do anything for a hit but can't see straight for all the acid he's dropping.

Fledgling actress Billie Cantrip is hoping for her big break but can't find a way out of her troubled relationship with an older man. And journalist Freya Wyley wants to know why so much of what Kloss touches turns to ash in his wake. Meanwhile, the parallel drama of Nat's screenplay starts unfurling its own deep secrets.

Sexy, funny, nasty, Eureka probes the dark side of creativity, the elusiveness of art and the torment of love.

"By his own terms, Quinn is the literary equivalent of Houdini, a novelist who has a particular talent for absenting himself and letting his characters come to life." ( The Independent)

What listeners say about Eureka