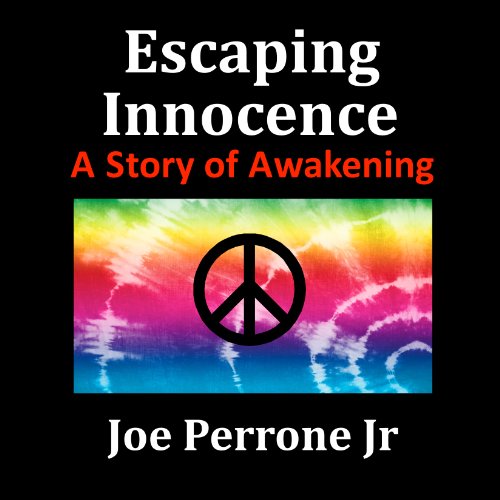 Meet David Justin, an Italian-Catholic, height-challenged youth, desperately trying to escape the bonds of sexual repression and adolescent innocence that hold him captive…in the 60s. The journey of enlightenment is both laugh-aloud funny and gut-wrenchingly emotional, as David discovers that coming-of-age is more than just a five-minute roll in the hay culminating in a thirty-second celebratory shower.

The audiobook is filled with universal characters and rip-roaring adventures, including a hilarious spring break trip to Key West, Florida, involving a gay artist, goats, fleas, and…well, you get the picture. Anyone who's old enough to remember the Age of Aquarius, drive-in movies, and network TV should appreciate, no, make that "dig" Escaping Innocence: A Story of Awakening.

What listeners say about Escaping Innocence

Too Close for Comfort...

What made the experience of listening to Escaping Innocence the most enjoyable?

Escaping Innocence brought back vivid memories of my youth...embarrassment, shame, guilt, lust, as well as some of the greatest times of my life. The events depicted in this tale of coming-of-age in the sixties were universal, and I'm sure anyone of that era would easily relate to them. Mr. Kohler's narration sparkled with an energy reminiscent of Jean Sheppard, one of the great storytellers of all time (A Christmas Story). His excellent voice talent added greatly to this already wonderful story. I highly recommend this to all baby boomers!

What was one of the most memorable moments of Escaping Innocence?

I think the section of the book that most touched me was the relationship between the main character, David Justin, and his black college classmates.

The scene in Captain Tony's bar.

Looking forward to more from this talented author.

I really didn't like this book.The storyline of a boy coming of age in the sixties seemed like a good one until you run into one too many 'hard ons' and 'wet dreams'.The narrator was good.I was given this book for free for an honest review.

Thanks for the Journey

My first thought when starting “Escaping Innocence: A Story of Awakening” was would a female who grew up in the 70’s be able to relate to a story about a male growing up in the 60’s? After I listened to the first chapter that worry was long gone. The author provided a tapestry of funny and poignant moments that draws the listener in right away.

The story begins by laying the foundation of the main characters development into a “man”. As a listener I truly empathized with that strange time between childhood and adulthood. As the story unfolds you realize that while many of the situations are uniquely male there are plenty of similarities between the genders in sexual development. I truly appreciated the author’s humorous take on situations that most would consider awkward at best.

This story was not just about sexual awakening. The honest insight into race, homosexuality, war and even domestic abuse provide some moments of reflection and pause. Instead of hitting the listener over the head with obviously contrived stories that provide the exact viewpoint the author wants the listener/reader to have the tale is woven with just enough details to allow the story to flow naturally.

As the story progresses you are taken on a fantastic journey that by the conclusion you feel like you have a beat up old suitcase with stickers pasted to it for all the places you have been. The main character and his supporting band of unique and fantastic supporting characters don’t leave you right away after competition of the story. A better compliment I cannot give.

The narrator, Gary Kohler, also deserves high praise. It’s too easy to say his voice was David Justin’s. I had no trouble hearing the wonderment, pain and tone that uniquely was the main characters. When another voice was needed to distinguish the words of another besides the main characters Mr. Kohler was able to capture that character as well without making it sound cartoonish or like he was trying too hard to make them sound different. Bravo Mr. Koheler.

Back to the Sixties

Would you listen to Escaping Innocence again? Why?

I might listen again, as I tend to read many books multiple times. It was certainly good enough to listen to again.

What other book might you compare Escaping Innocence to and why?

"On the Road" by Jack Kerouac, but from a different era and the main character is a bit younger. The theme of self-discovery is very similar, however.

What does Gary Kohler bring to the story that you wouldn’t experience if you just read the book?

The way he brings different voices to different characters. Definitely something you would only get from listening to the book.

Most of the story brought back memories of that time period, as I would have been just a few years younger than the main character. Not sure there was on specific moment that moved me, but I could certainly relate to the main character.

Escaping Innocence (A Story of Awakening) Follows David Justin from early puberty to early manhood set in the backdrop of the early 1960's, a time that holds a special place in the hearts of us old coots. It's a funny, irreverent recounting of David's adventures in high school and beyond, as he pursues the one thing that almost every male of his age thinks about: getting a member of the opposite sex into bed. Along the way, we get to peek into David's struggles as tries to figure out relationships with his friends and, even more importantly, what it is he really wants to do with life. It touches on some of the important events that helped to define the sixties: the civil rights movement and the war in Vietnam, in particular. Somewhat surprisingly, there is no reference to the Kennedy assassination, but that is probably fine. The tone throughout is too light-hearted to get bogged down in that tragedy.

For those of us who lived through the sixties, this book will bring back many memories, most of them good. For those too young to have lived in that timeframe, or those who were too young to really remember it, it does a good job of capturing what it was like to be a young person during that time. I enjoyed it thoroughly.