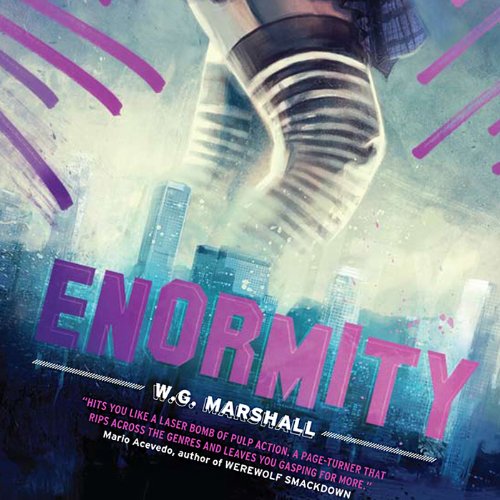 Genres collide in this audiobook about 98-pound weaklings, B-movie, tropes and Cold War militarism. Narrator Traber Burns' performance brings to mind mid-20th century radio announcers as he tells the story of Manny Lopes, an American civil contractor working in Korea who feels isolated due to his race, puny stature, failed marriage, and fetish for Asian women. However, due to an accidental quantum explosion, Manny finds himself metamorphosing into a mile-high colossus. Rampant destruction ensues while the US military tries to redirect Manny towards Dorothy Lee, an equally-gigantic North Korean assassin. Odd turns of events will keep listeners guessing at what happens next.

Enormity is the strange tale of an American working in Korea, a lonely young man named Manny Lopes, who is not only physically small (in his own words, he's a "Creole shrimp"), but his work, his failed marriage, and his race all conspire to make him feel puny and insignificant - the proverbial 98-pound weakling.

Then one day an accident happens, a quantum explosion, and suddenly Manny awakens to discover that he is big - really big. In fact, Manny is enormous: a mile-high colossus!

Now there's no stopping him: He's a one-man weapon of mass destruction. Yet he means well.

Enormity takes some odd turns, featuring characters like surfing gangbangers, elderly terrorists, and a North Korean assassin who thinks she's Dorothy from The Wizard of Oz. There's also sex, violence, and action galore, as Manny battles the forces that seek to seduce or destroy him.

Who will survive? Who will be annihilated? Listen to Enormity and find out!