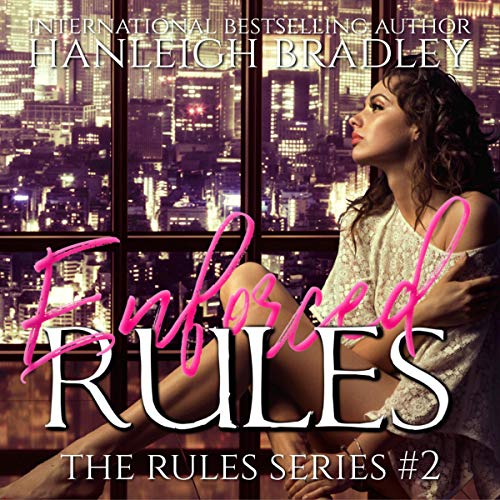 She’s under his skin, in his mind, and pushing her way into his heart. Aurora’s threatening to steal his control. She sees more than he wants her to.

Landon doesn’t do vulnerable. He doesn’t do weak. And that’s exactly what she does to him.... She’s got him completely at her mercy.

Landon's world is unravelling and fast and it's all Aurora's fault. With control out of his reach though he might just push to enforce the rules between himself and Aurora in a desperate attempt to reclaim the control he craves. After all, he told Aurora he would help her break her rules but he hadn't planned on it being at the expense of his own.

But will his need for control prove too much for Aurora? Can this British bad boy and pretty English socialite balance their need for control or will their relationship fail before it even really begins?

More about the Rules series....

Aurora Stone is the daughter of two of London’s high society elites. Her entire life has been dictated by her parents and she’s finally ready to break free from their expectations and rules. A one-night-stand with CEO bad boy and all-round “manwhore” Landon Peters is the perfect place to start.

Landon agrees to help her break her rules but with every rule he helps her break, she breaks at least five of his. He doesn’t understand how a girl he barely knows could possibly get under his skin when he’s managed to keep all the rest at arm’s length.

His world and the control he usually wields is unravelling and fast. Aurora’s ability to make his rules seem completely irrelevant terrifies him. He doesn’t do vulnerable and that’s exactly what she makes him; weak and completely at her mercy. Can this British bad boy and pretty English socialite build a future together or is what they have really just sex?

I loved the continuation of Aurora and Landon’s story. It was filled with steam, family, and heartbreak. We learn more about both of their families and they’re definitely just as broken as the rules they’re breaking for one another. Control is big for Landon and he can’t handle not having it. Aurora starts to grow and stand up for herself and others in this book and I like that her character is developing. Aileen, Aurora’s sister, had a falling out with her family and honestly it’s for a good reason. My heart was broken for her on so many levels of what she had to go through and is still struggling with because of it. I know this isn’t her story, but she was my favorite character and hope she gets her own in the future. I loved seeing the sisters reconnect and still have a fierce devotion to each other after not talking for years. Hanleigh has definitely proven herself to be able to write every emotion and make you feel it with this book. I loved that even though this is Aurora and Landon’s story family plays a huge role and it isn’t just steamy scenes. I honestly can’t wait to see how Aurora and Landon’s story ends. Stacy did a great job with this narration. Aurora and the female voices were done very well and the male voices didn’t seem as gravely or forced this time. Her voice made you feel the steam, heartbreak, and everything in between. *I was given this free review copy audiobook at my request and have voluntarily left this review.

I really enjoyed get to see Aurora and Landon break more of their rules. Landon's rules were to keep people at arm's length. Aurora's rules were set by her parents to keep her close to home and sheltered. Their relationship is very fast paced. Can't wait for more.

I really love this book and audiobook, they are fantastic! The Narrator for the audiobook is amazing. I cannot get enough of this series. I am in love with the unique storyline and the characters. I can’t wait for the next book!

Landon Peters Is a brilliant, complex CEO playboy who has strict rules for himself. He needs to have a fair amount of control over nearly everything in his life. As much as he enjoys taking a woman out, it doesn't include taking her home or, ever, to his own bed. When he met Aurora Stone, 48 hours ago, his entire world tipped upside down. Now he wants nothing more than to take her to his home and wake up next to her. In just a matter of hours, as he breaks more and more rules, he can't find it in himself to be in the least bit upset. For the first time, he doesn't want to let Aurora go home and he actually "allows" her to stay. Aurora is a product of rules, herself, with a mother who runs a household with a set of rules that are not to be broken. Aurora hadn't broken any rules of consequence until Landon came along and volunteered to help break as many as she wanted. Since he met her just two days ago, everything he believes in has flown out the window and the only thing he wants to do is keep her by his side. She offers him a sense of comfort and he finds himself telling her too much about him and divulging his secrets. The family troubles from the first book still exist and the angst affects their life together. When Landon starts to feel overwhelmed and his painful memories invade his mind, he turns her away without so much as a word of explanation. Aurora, with help from her sister, makes him see what he's missing if he no longer wants her around. I got a little perturbed with Landon because he too often treated her coldly and without much emotion. He kept his sorrow about his sister's death inside and, even when Aurora asked if she could help, he shut her out. At heart, they are a special couple and nothing is going to keep them apart for long. Ready for the next step in their relationship, Landon asks Aurora to move in with him. To be continued..... The narration is nicely done by Stacy Hill. There are times when her voice sounds a little bit sing song, but the characters are voiced well and their personalities shine through.

Enforces Rules by Hanleigh Bradley is the second story in the London series. This is a terrific read, well written and likeable characters. Aurora and Landons relationship encounters some problems just as it seems to be beginning. Can they both overcome the obstacles and their personal rules? Enjoyed the story!!

This is book 2 in the series...the good girl and the playboy. Landon doesn’t play by the rules and he doesn’t let women get to him, but somehow, that’s what’s happening with Aurora. Broken rules and lots of steam will leave you yearning for book 3!!!

Lots of drama and suspense leading up to a perfect HEA. This ended on one of the best last lines ever. Hot and romantic and everything you’d want in a read.

Landon and Aurora haven’t known each other long, but the connection is a strong one. Despite their attraction, family issues and insecurities threaten to tear them apart. He helped her break her rules, she unwittingly does the same for him, and it’s terrifying. This is a sweet, sexy, and even at times frustrating love story, and it feels more real as a result. They don’t communicate well, but they’ve only known each other for such a short time, so that really makes sense that they would hesitate in opening up fully to each other. It’s interesting, the way the POV is set up in the book - we get a scenario from one of their perspectives, and then it back tracks, and we get the same (roughly) scenario from the other’s perspective. It makes for a more rounded view of where everyone’s head is at, although there are a couple areas where we don’t get that overlap, and it would probably have been helpful (like after Landon’s family dinner). It just take a minute to get used to the slight time hops at first, but overall it works pretty well. The conflict here isn’t earth shattering, really, but it’s moving and the emotions can get raw, and that is conveyed pretty well, I think. Overall, an enjoyable romance and I look forward to the next book. I received this audiobook free in exchange for my fair and honest review.

The back and forth POV was distracting and a waste of time, because almost the same information was regurgitated with few interjections here and there. Just as I got into the story it was restated by the other character. Not a fan. The narrator was okay, but didn't do the male voices at all and there was no British accent at all. The characters were from the UK!!! I did like both main characters. I voluntarily listened to a free copy of this and am giving an honest review.

I loved this read / listen. Technically this could be read / listened as a stand alone but I really feel that you will get more from this book if you've read / listened to book 1 first. I love that while the ending is open, it's not a cliffhanger. My only big criticism would be the narration - while Hill did a GREAT job - again, this book is supposed to take place in London and while there are a few British words thrown in (arse etc) an accent in the narration would go a long way. In this read Landon struggles with his need to control everything and when he can't (because really, who can) he shuts down and bows out...but he soon realizes that controlling everything could mean losing everything. Has he come to this realization too late or can he fix the biggest mistake of his life? Not only did I love these main characters but also the secondary characters. I loved the fierce friendships both have which only enhance. A great read / listen - I loved it! I received a free copy of this book and am voluntarily leaving a review.

Better Than The First

Title: Enforced Rules Author: Hanleigh Bradley Format: Audio Narrator: Stacy Hill Genre: Romance Standalone: No Part of a Series: Book 2 of The Rules Series POV: Landon and Aurora Steam Level: Hot 5/5 I like this book better than the first one. Just like the first book, Enforced Rules is not a standalone. However, unlike traditional cliffhangers, Enforced Rules ends on a transition point, rather than a point of peril where you have to read the next book right now. While I like this type of cliffhanger better I still think that, given the size of these two books, this could have easily been one longer book. But, I digress, I enjoyed Enforced Rules more than Broken Rules. There was less (although still a few) scenes that went backward in time when the POV switched. It seemed like these were better integrated in the story and used as a way to tell you some vital (?) information. I enjoyed meeting Aurora and Landon's siblings in this story. I look forward to reading the final installment of Landon and Aurora's story in the future. I received this audiobook for free. This is my honest and voluntary review.