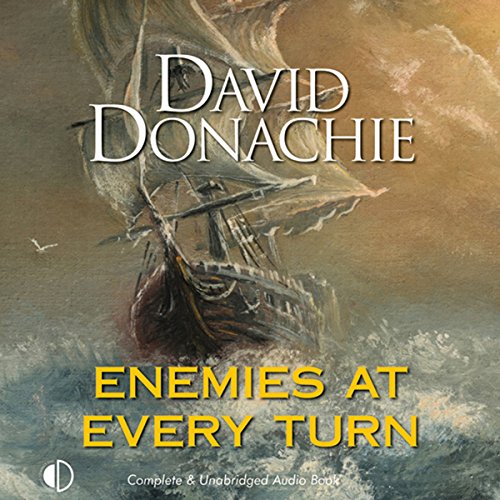 Enemies at Every Turn

By: David Donachie
Narrated by: Michael Tudor Barnes
Try for £0.00

The year is 1794. Free from jail, John Pearce is not free from the smugglers whose boat he stole. While lying low, Pearce soon has other pressing concerns on his mind. Granted a commission by William Pitt, John Pearce evades his pursuers by undertaking a dangerous mission in France. As rebellious ambition turns to bloody disaster, Pearce must try to re-join Admiral Howe. Also serving with Howe is Ralph Barclay - who has somehow contrived to yet again press Pearce’s friends Charlie and Rufus into his crew. The danger for the Pelicans is only just beginning, however, as Howe’s collision with the French fleet climaxes in one of the greatest battles of the Revolutionary War.

What listeners say about Enemies at Every Turn

I am enjoying the series. There is just a bit too much recapping in each book that increases with every volume meaning the actual development of the story gets shorter.

Best: Finally! Finally, there was some sort of a continuation of the story! I thought Mr Donachie had fallen asleep.Least: It felt as if the story was written because it had to be. It seemed shallow, dragging and it could have starred as well or better as just a chapter in a book. The whole book sort of slogged along, and as far as a conclusion... It just seemed to die in mid-plot.
I did get the next book just to see where it was leading and it was pretty much the same. I've gone back to re-reading O'Brian & Lambdin; I get more pleasure out of those old stories. It may be time to wrap it up and move on to something else. Or rest on one's laurels.

Would you be willing to try another book from David Donachie? Why or why not?

I'll wait until I read some reviews.

Could you see Enemies at Every Turn being made into a movie or a TV series? Who should the stars be?

A rebellion inside a rebellion

This is book eight of the John Pearce series. In the last book Pearce was caught up in smugglers’ ring and smugglers are after him in this book. In this book Pearce is given a command by Pitt and sets off on a mission to contact the leaders of the rebellion in the Vendee. The situation is complicated by the discovery of his ex-mistress among the rebels. The rebellion is a disaster and Pierce must retreat, ex-mistress in tow and the smugglers still chasing him. The ending leaves the reader hanging until the next book comes out.

I do not like it when they change the narrator in the middle of a series. Peter Wickham was doing a great job narrating the series. Then they substituted Michael Tabor Barnes as the narrator. It is unfair to the new narrated as no matter how great they maybe they are not the original voice that the reader is use to.