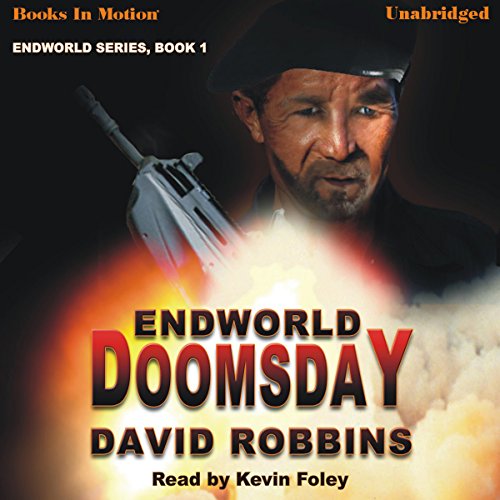 At a remote site in Minnesota, filmmaker Kurt Carpenter has built a secure compound and invited a select group of people to bunker down until the worst is over. The world into which they re-emerge is like nothing they've ever seen. At first they think they're the only ones left. But they soon find out how wrong they are. In the wasteland of what used to be America, their battle to survive is only just beginning.
©2009 David Robbins (P)2009 Books In Motion

What listeners say about Endworld Doomsday

I accidently stumbled on the Endworld series in a charity shop years ago. They aren't great, exciting and edge of your seat page turners. Cheesy, sexist and stereotypical is probably closer to the mark. However, the books are fun and I look forward to hearing the rest of the series. Regarding Kevin Foley narrating, he does a terrible Job. He's Cheesy, sexist and stereotypical...actually he fits right into David Robbins Endworld series.

I really enjoyed it, and was thrilled to know that there was a second book. But a warning...the second book takes place 100 years in the future, but was written by the author in 1986 and has 28 books in that series. Star Wars type deal. Both books are good (although second is a bit dated with super cheese macho dialog). But the second does not really talk about many of the characters from the first book that you want to know about. So I can only hope that Mr. Robbins is planning some books that take place between the two. I am having surgery and will have 6-8 off from work so maybe I'll read the other 27 books! :)

Didn't live up to its expectations

I thought the idea of the story was great. But the author would go into detail on some things but then skip over major plot lines. It also had no ending .. and part two was a totally stand alone book so there really was no ending.

Started out good, but got weird at end. No conclusion yet and I assume there are sequels.

I have to say I loved this book, I have read the paperback multiple times.

read these in 86 now listening to them is just as good ,can't wait to hear the next one

I am so glad this series is available on Audible!  I had been searching for the entire set but stopped when people were asking too much for used copies of the books.  I started reading these books many years ago and now on Audible I can enjoy "reading" them again and finally getting the ones I missed!  Blade and Hickock are my favorite characters and they first appear in "The Fox Run."  Thanks for putting this book also as a prelude of the future "Runs!"  It answers a lot of questions I had.

Prequel for the Endworld series

Most of you may not be familiar with this series or its author but I have read this series since I was around 12 years old. It remains one of my cherished childhood memories sitting by the pool with a new Endworld and reading it straight through. I did a lot of book reports growing up on Endworld and the dystopian future it revealed. I remember even writing an essay about if the apocalypse could possibly happen in this way. Needless to say I love this series and for those who are confused about characters and why it stops where it does just find the series in paperback (they have the first four on audible and eBook format) and give it a read. You'll understand that this book was just the foundation of what was to come. Another book "A girl, the end of the world and everything" is also part of this universe. It all builds upon characters that are known in a series called Endworld, that is 28 books ongoing as of now. Love this series and everything in it!

Barely worth the time(Trying to avoid spoilers)

What was most disappointing about David Robbins’s story?

The premise has merit but the execution of the initial plot lines is awful. It starts like most End Of Civilization stories with things going from bad to worse as you meet the main characters. But as each one finds themselves in the expected tough situation cliffhanger, it just ends there! You find out a few chapters later that this character or that one arrived safely..Ummmmm OK. Great.
As it progresses it just gets..strange. It seems that most of the main characters are a bit...odd. ( Without putting any spoilers out there, I have one word..Thor) Which might not be so bad except you are constantly reminded they were chosen based on their psych profile..


How did the narrator detract from the book?

The Narrator was mechanical, monotone and made a poor attempt a changing up the characters voices with any consistancy

There are few audible books I cannot finish, this was one of them.......and solely put off by the narrator. There are some narrators who when reading the female parts put on a voice that makes the female characters sound stupid, moronic, slow, etc etc, and this spoiled it for me and I could not keep listening. Do they really think women sound like that?

One of the best audio I've listen to in a long time, great plot, forward moving story line. I plan to read the other books in the series since they are not in audio.