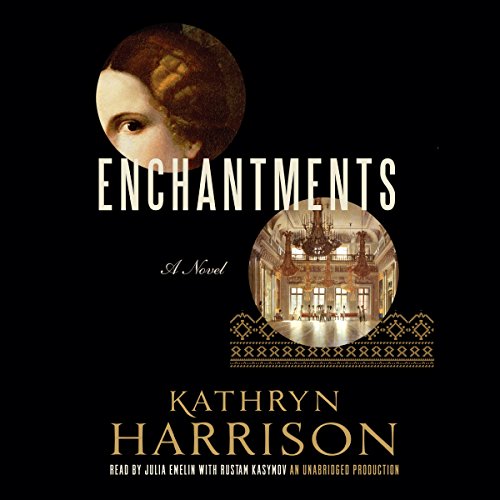 A Novel of Rasputin's Daughter and the Romanovs
By: Kathryn Harrison
Narrated by: Julia Emelin, Rustam Kasymov
Length: 11 hrs and 34 mins
Categories: Fiction, Historical
1 out of 5 stars 1.0 (1 rating)

From Kathryn Harrison, one of America’s most admired literary voices, comes a gorgeously written, enthralling novel set in the final days of Russia’s Romanov Empire.

St. Petersburg, 1917. After Rasputin’s body is pulled from the icy waters of the Neva River, his eighteen-year-old daughter, Masha, is sent to live at the imperial palace with Tsar Nikolay and his family - including the headstrong Prince Alyosha. Desperately hoping that Masha has inherited Rasputin’s miraculous healing powers, Tsarina Alexandra asks her to tend to Aloysha, who suffers from hemophilia, a blood disease that keeps the boy confined to his sickbed, lest a simple scrape or bump prove fatal.

Two months after Masha arrives at the palace, the tsar is forced to abdicate, and Bolsheviks place the royal family under house arrest. As Russia descends into civil war, Masha and Alyosha grieve the loss of their former lives, finding solace in each other’s company. To escape the confinement of the palace, they tell stories - some embellished and some entirely imagined - about Nikolay and Alexandra’s courtship, Rasputin’s many exploits, and the wild and wonderful country on the brink of an irrevocable transformation. In the worlds of their imagination, the weak become strong, legend becomes fact, and a future that will never come to pass feels close at hand.

Mesmerizing, haunting, and told in Kathryn Harrison’s signature crystalline prose, Enchantments is a love story about two people who come together as everything around them is falling apart.

From the Hardcover edition.

"A sumptuous, atmospheric account of the last days of the Romanovs from the perspective of Rasputin’s daughter, Enchantments animates a kaleidoscopic breadth of historical detail with the sensuous, transporting prose that is Kathryn Harrison’s trademark." (Jennifer Egan, A Visit From the Goon Squad)
"Ask yourself who, in all the world, would be the best novelist to imagine being Rasputin’s daughter. Kathryn Harrison makes the answer obvious. Her Enchantments is a stupendous work of historical imagination.” (Peter Carey, author of Parrot and Olivier in America)
“Kathryn Harrison locates within the crevices of history moments of poetry and passion that electrify the reader. In Enchantments, Ms. Harrison takes us on a magic carpet ride to Russia one hundred years ago, and with perfect grace, impeccable style, and great narrative flair, she gives us a whole wounded world that is for the course of this utterly compelling novel as real as our own lives. Actually: more.” (Scott Spencer, author of Man in the Woods and Endless Love)

If you could sum up Enchantments in three words, what would they be?

Have you listened to any of Julia Emelin and Rustam Kasymov ’s other performances before? How does this one compare?

I enjoyed Julia Emelin's pronunciation of Russian words. A somewhat halting narrative added to the sense of Masha's naivete.

The deer, domesticated in the czar's park, approaching guards for food and being shot.

3 of 6 people found this review helpful

I started reading Enchantments, and thought the language was lovely and would be improved by hearing it spoken. I can't believe Audible chose the narrator they did. This Audible book is such a disappointment. The narrator speaks the text without conveying any meaning in the words. It could as easily be a computer generated voice.

7 of 15 people found this review helpful