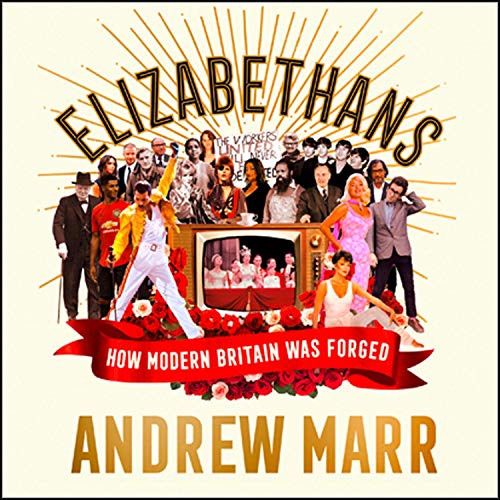 David Attenborough. Marcus Rashford. Diana Dors. Winston Churchill. Elizabeth David. Bob Geldof. Zaha Hadid. Frank Crichlow. Quentin Crisp. Dusty Springfield. Captain Tom. Who made modern Britain the country it is today? How do we sum up the kind of people we are? What does it mean to be the new Elizabethans? In this wonderfully told history, spanning back to when Queen Elizabeth became queen in 1953, Andrew Marr traces the people who have made Britain the country it is today.

From the activists to the artists, the sports heroes to the innovators, these people pushed us forward, changed the conversation, encouraged us to eat better, to sing, think and to protest. They got things done. How will our generation be remembered in a hundred years’ time? And when you look back at Britain’s toughest moments in the past 70 years, what do you learn about its people and its values?

In brilliantly entertaining style and with unexpected insights into some of our sung and unsung heroes, Andrew Marr offers up a first draft of the history we are all living. This is our story as the new Elizabethans – the story of how 1950s Britain evolved into the diverse country we live in today. In short, it is the history of modern Britain.

"Like The Crown in book form: a stream of intriguing stories producing a mosaic that the reader, with expert steers from Marr, can glue together." (Guardian)

What listeners say about Elizabethans

I am sure this is as fascinating as all other Andrew Marr books. However, I couldn’t get beyond chapter one as the narrator is awful. His tone of voice, inflection, and rhythm are robotic. In fact he sounds exactly like HAL 9000 from 2001. “I’m sorry Dave, I’m afraid I can’t do that. “

I have enjoyed listening to this book immensely. A lively and fast moving tale of change and transformation, punctuated by fascinating examples, for example. The contrasting backgrounds and views of Enoch Powell and Tony Benn. Wonderful.

Please! No more from this narrator!

An excellent book by an excellent writer. Ditto for Salman Rushdie’s ‘Languages of Truth’. But what possessed these two authors - or their publishers or Audible - to use this narrator. His bio is remarkable as a stage actor but his tuneless, staccato-clipped reading style makes otherwise straightforward sentence structures barely Intelligible. Gave up on the Audible of both books and reverted to my hard copies.

Every word this man says is a tonic of reason nd intelligence.
And it's read clearly and beautifully.
A must have!

A great listen, diverse & thoroughly informative although the narrator does seem to ‘drone on’ a bit a times