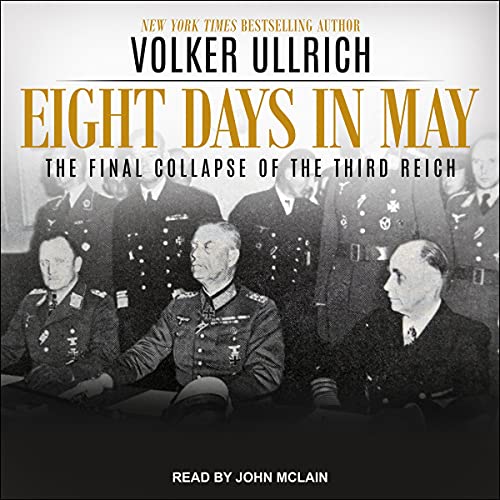 Eight Days in May

On April 30, 1945, in a bunker deep beneath the Old Reich Chancellery, Adolf Hitler and his newly wedded wife, Eva Braun, killed themselves. But Nazi Germany lived on, however briefly. The subsequent eight days were among the most turbulent in history, witnessing not only the final battles of World War II and the collapse of the Wehrmacht, but the near-total disintegration of the once-mighty Third Reich.

In a taut, propulsive narrative, eminent historian Volker Ullrich depicts the final days of the Nazi empire through the eyes of Germans, both famous and ordinary, who experienced them. He takes us inside the phantomlike regime of Hitler's chosen successor, Admiral Karl Dönitz, while capturing the drama of a society in its death throes - from mass suicides to fanatics calling for one last stand. Integrating an astonishing variety of new primary sources, Ullrich offers an indispensable account of the costs of mass delusion.

What listeners say about Eight Days in May

The story and contents are very interesting, but the audio recording is choppy and skips too often. Additionally it does not seem like the narrator knows how to pronounce German words.

Masterful Account of the Last Month of Nazi Government

Masterful account of the last month of the war written by a modern German historian who is completely frank about sentiments and atrocities. What I liked about this book compared to most others that focus on the bunker story is that the reader gets a behind-the-scenes view of what the leaders were talking about and what regular Germans were saying and doing.