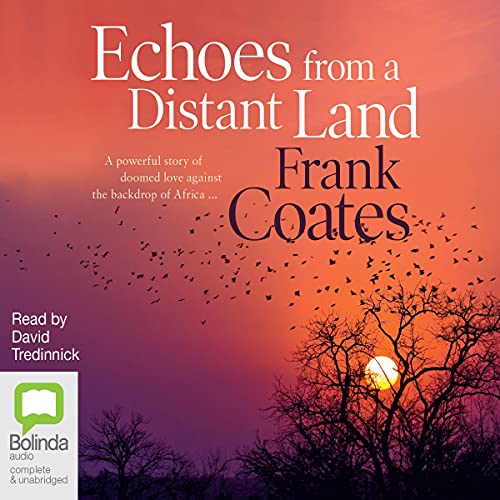 Echoes from a Distant Land

By: Frank Coates
Narrated by: David Tredinnick
Try for £0.00

Wangira is caught between the traditions of his Kikuyu tribe and the disturbing new ideas of the missionaries. When, as a young warrior, he saves the life of a wealthy American photographer, he is offered the chance of a new life far away in the white man's world.

Between the wars, Kenya is a land of boundless opportunity where the rich engage in hunting safaris, horse racing, outrageous parties, and all the pleasures that money can buy. Dana Northcote is a celebrated socialite, living the high life, but when Wangira uses her husband's farm in the Kenyan highlands to hide some contraband, she embarks on a dangerous, passionate affair. Ultimately, she is forced to make a heart-rending decision that will tear her life apart and has consequences which will echo through the generations. Spanning the first half of the 20th century and culminating in Kenya's fight for independence from the British Empire, Echoes From a Distant Land is a vivid evocation of a nation in turmoil, and a story of a love that dared to cross the divide.

What listeners say about Echoes from a Distant Land

What did you love best about Echoes from a Distant Land?

the tales of land and people

the twists and near miss,s between family

he just make a great reader brings story,s to life

If you could rename Echoes from a Distant Land, what would you call it?