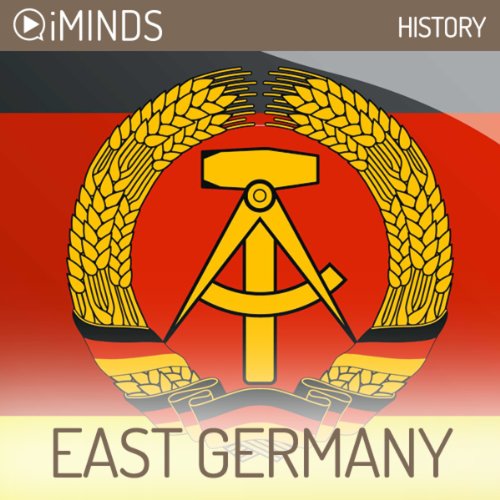 By: iMinds
Narrated by: Hamish Hughes

Imagine a world where hidden cameras watched you as you walked to the bus stop, a piece of art could land you behind bars, or a secret police group could pick you off the street with little to no warning. Luckily, this is something most of us have never experienced, but for people in East Germany, this was a daily reality. Performed here by Hamish Hughes, this program from iMinds takes a thorough and concise look at the history and culture of East Germany. Whether you’re a history buff or just looking to pick up some new trivia, this well organized and concise audiobook is a must listen.

Learn about East Germany with iMinds insightful audio knowledge series. In East Germany, it was not uncommon to hear of secret police patrolling the streets dressed as civilians. It was not unusual to find hidden cameras lying in garbage cans. Artistic expression often led to a prison sentence, while learning about the outside world came only through censored films. Though East Germany was also known for its music and athletes, police brutality and economic depression dominated the international news. Fear and scarcity were daily realities for the people of the East Germany, also known as the German Democratic Republic; and this despite the great cultural achievements of the country and the immense Soviet power behind it.

The Socialist Unity Party of Germany, known as the “SED,” controlled almost every aspect of East Germany’s economy and culture after 1949. Although this government allowed different parties to exist, it was essentially a one-party system that combined the Social Democratic Party and the Communist Party of Germany. Elections were held in an open manner in East Germany. Yet democracy was virtually non-existent. Voters were given a choice of approving or rejecting “unity lists” which served as opinion polls. On these lists, approval ratings of the Socialist Unity Party were around 90%, due to unregulated counting and corruption.

A promising start but...

The book had promise but it wasn't detailed enough and finished abruptly. so a little disapoiting