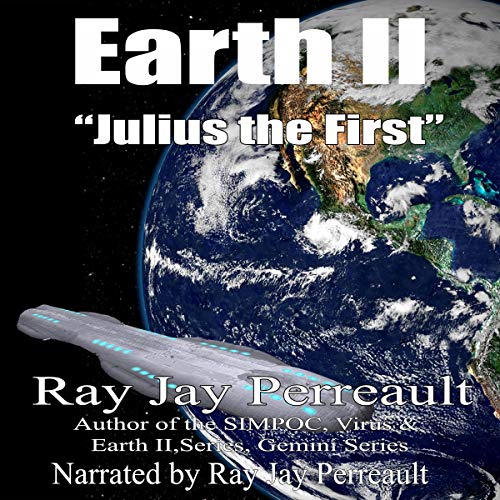 Earth has survived an alien virus in this post-apocalyptic story. The alien virus was used to cleanse the planet before harvesting, and the surviving humans were given thousands of spaceships and robots as war reparations. The few survivors must adapt to survive. There is an unexplored Galaxy beyond their solar system. They must be wary of both their neighbors and an evil computer named Julius. Julius was an intelligent computer unleashed during the viral attack. He was programmed to deal with the two threats to his existence, SIMPOC, another intelligent computer programmed to help humans, and the remaining humans. Joan Herl and her husband Tom commandeer an alien ship to follow Julius. Julius has stolen an alien ship seeking resources so that he can deal with SIMPOC and the survivors. Julian knows that he must build up his arsenal so he can deal with the threats to his existence. He captures a very import human, but he doesn't know who he is!

What listeners say about Earth II: Julius the First

I have listened to this entire series so far. The first two books were narrated by a company that gave over the top sound effects and so-so narration. The rest of the series has been narrated by the author. Narration is not his strong suit… but it is better than his writing.
This series has been an interesting storyline from the beginning. Enough so that I have chosen to keep going through all the issues that are present in every volume.
Mr. Perreault chooses to go into great detail on most mundane points that should barely be given a reference. He goes into so much detail that the story line is lost and you keep looking for a reason behind the inclusion of the details. Like maybe it will be relevant later? But when later never comes he assumes you don’t listen and tells you again just so that you remember these unimportant points.
Many authors have issues with how they jump around in a story. They could take lessons from Mr. Perreault. He is the grand master of jumping in time with the same character, jumping to a different character, or just plain getting lost in the story. Take a breath. You will need it.
I have written before on the issues that I have had with the narration of some books. I will attach that below following this review.

As to this series and specifically this story, I do like the storyline.
I think the characters are reasonably developed and act appropriately. My only issue is how the author chooses to tell us the story. Not the narration, I have read two of these stories and the same issue is present on the written page. Ray Jay Perreault used to have a tag line on his web page… I cannot find it so it is apparently gone but it went something like “A good Sci-Fi author shows you another world, A great one takes you there. Well I can see why he would take that down because I am not sure I can see what he is showing me let alone feeling like am there.

I was given this free review copy audio book at my request and have voluntarily left this review. This review is my opinion and good bad or otherwise was not solicited.


“When reading a book, there are visual clues as to how we read and interpret the text. Common things like periods, sentence structure, and paragraphs will change how a subject is communicated.

When listening to an audio book, we depend on the narrator to provide us those clues as we listen to the story. Any decent narrator is reasonably proficient with these devices. This is not my issue and I don't believe that my issue is truly the narrators fault. Or the authors fault either.

In many stories there are chapter breaks. Some stories have time breaks within chapters and some stories even have complete subject/context changes inside of a chapter. An example would be that a chapter starts out following one person while that person is doing something. A time break means that we are still following the same character, but, that character is now somewhere else doing something else. A noticeable amount of time has passed. On the written page there is often a large break in the text to show this time jump. Later on in the chapter, we may switch to a different character. This is similar to a time jump but also includes a character change as part of the jump. It is also signaled in a similar way on the written page.

The problem that I am having, and happens often in this book, is that there is no cue to the listener that such an event has occurred. When listening to a story, the only clues to even a paragraph change is the subject of the paragraph and you have to listen for that . But a paragraph change really does not matter when listening unless a major change has occurred. Like a time jump. Two characters in the middle of a conversation... one falls silent... the other, after a pause, asks what’s the matter? This is common with narrators. A simple pause in speaking deals with this pause in the dialog. But what if the next words in the conversation are weeks later? The same two people are speaking. The same questions are being asked. A similar conversation is taking place. But the time has jumped. When listening to the narration there is no difference between this time jump pause and the simple pause in the dialog of the prior conversation. Until the story literally tells us that time has passed we have no idea and this can often cause issues tracking with the story. I often hear no pause at all for chapter breaks, time jumps, character changes, or anything else you can imagine that is commonly shown on the written page that does not translate to the narrated page.

Some stories actually state the chapter breaks. I like this practice because when I hear this I can start looking for what has changed for the new chapter. I understand that it can be jolting in some stories but it is a needed tool for the listener to follow the story as the reader would.

I am thinking we need some tool for these other breaks as well.
I simply must say that there is a problem when the listener cannot tell the difference between a period and a time jump let alone a character change or even a chapter break.”