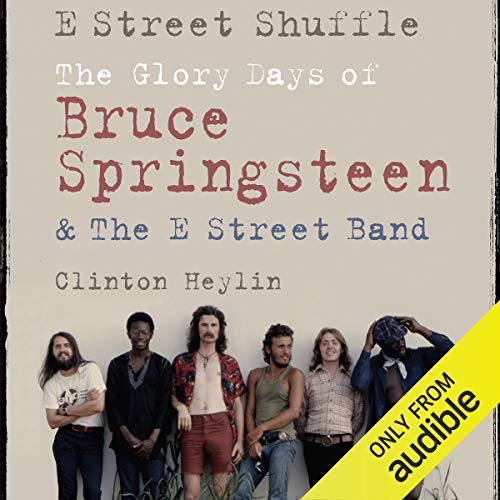 The Glory Days of Bruce Springsteen and the E Street Band
By: Clinton Heylin
Narrated by: Dan John Miller
Length: 12 hrs and 41 mins
Categories: Biographies & Memoirs
3.6 out of 5 stars 3.6 (7 ratings)

Before he was the swaggering, stadium-packing megastar, Bruce Springsteen was a brooding introvert, desperate to strike a balance between his nuanced songwriting and the heft of his backing band. Clinton Heylin's revelatory biography, E Street Shuffle, chronicles the evolution and influence of Springsteen's E Street Band as they rose from blue-collar New Jersey to the heights of rock stardom.

The band's players - most notably saxophonist Clarence "Big Man" Clemons, guitarist "Little" Stevie Van Zandt, and drummer Max Weinberg - became Springsteen's comrades in concert, helping him find the elusive sound and sonic punch that highlighted The Boss's most creative period, including Darkness on the Edge of Town, Born to Run, and Born in the USA. Fans will also learn another side of Springsteen, one punctuated with his clashes with studio executives seeking a commercially viable, radio-friendly album, and his temporary disbanding of the E Street Band to pursue projects like the eerie acoustic of Nebraska.

Coinciding with the 40th anniversary of Springsteen's debut album, Greetings from Asbury Park, drawing on interviews and access to new recordings and shows, Heylin paints a bold picture of The Boss.

A good insight into the hard work and effort Bruce put himself and those around him through to get the early albums out.