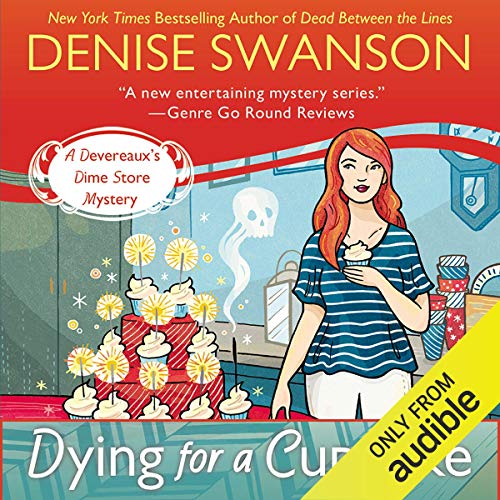 Dying for a Cupcake

Dying for a Cupcake

When Devereaux "Dev" Sinclair hosts a cupcake contest at her five-and-dime store, she discovers that someone is just dying to win....

Kizzy Cutler finds it so delicious to be back in her hometown of Shadow Bend, Missouri, that she seems to have forgotten why she fled 20 years ago. For now, she's excited to kick off her new line of cupcakes with a competition, which Dev has agreed to host in her shop. But before the first yummy cupcake is even baked, Kizzy's assistant Fallon dies from a mysterious ailment. While the medical examiner attempts to discover what killed Fallon, Kizzy declares that the show must go on. However after Kizzy escapes several near misses, Dev is convinced that someone in Shadow Bend has it in for the cupcake queen. Is the secret from her past so dark someone still wants to kill her for it? With a list of not-so-sweet suspects, Dev's in a race against the timer to solve the murder before someone else gets iced...

What did you like most about Dying for a Cupcake?

What other book might you compare Dying for a Cupcake to, and why?

Any of Denise Swanson's book series. They all have great characters and setting with a strong female narrator and great side kicks.

I enjoyed how she portrayed each character.

Not really but I really enjoyed it all.

This is a great series and it is not necessary to begin with the first book.

Cozy mystery in the chick-lit manner. Lots of female characters but some are a bit too shallow and stereotypical. Entertaining.

The narrator was great and the book was fantastic! I love that I can listen when my kids are around and not worry about them hearing "bad words" or "sex scenes." She is one of my favorite authors!

I enjoyed the forth novel of this series. It's a bit unrealistic that every single man in town is instantly in "like" with Dev. However, Swanson makes it work. I enjoyed this latest addition to the series and can't wait to see how it continues with the new twists and turns introduced.

Devereaux's Dime Store is one of the locations being used for the Kizzy Cutler's Cupcake Competition in her original home town of Shadow Bend. When Kizzy's assistant is killed and there are a couple of attempts on Kizzy's life, Devereaux is determined to figure out what this is all about.

I enjoy this author, and the series. I liked the Chapters that were written from the point of view of Devereax's prospective beaus.

This reader captures Devereax's voice perfectly. And I did not solve the mystery before it was revealed!

Where does Dying for a Cupcake rank among all the audiobooks you’ve listened to so far?

mid point, have listened to 100's of books, not at bottom, not at top

If you’ve listened to books by Denise Swanson before, how does this one compare?

better than the other two, this one more cohesive, more substance to the mystery

Have you listened to any of Maia Guest’s other performances before? How does this one compare?

This series keeps getting better & better!

Devereaux “Dev” Sinclair's Dime Store is taking part in a cupcake contest to end all cupcake contests. Kizzy Cutler is the famous Cupcake Queen, and she's returning home to be a part of the contest, and award the grand prize. Not everyone is happy to see Kizzy Cutler though. When her assistant is killed, and attempts are made on Kizzy's life, it is clear that someone wants the Cupcake Queen dead. With Noah and Jake out of town, Dev and friends, along with the help of the sexy new fire chief, Coop, get on the case to find out who is trying to kill Kizzy.\

I have to say Denise Swanson sure knows how to pack a punch with her cozy mysteries. With 21 cozy mysteries published between her two series, she certainly has the experience and this shows in her latest offering, Dying for a Cupcake.

It's a action-packed time for Dev, as she helps with the Cupcake Contest. This isn't the taste-testing, which surely Dev would prefer, but keeping her Dime Store running, keeping Kizzy under control with her infamous short-temper, and more importantly, keeping Kizzy alive! From High School Queen to Cupcake Queen, Kizzy has a natural ability at annoying people, and it turns out she's annoyed one person so much that they want her dead.

Noah and Jake are both absent in this story, with Noah providing medical aid overseas and Jake on the trail of the man who kidnapped his ex-wife, leaving Dev alone to sort through this mess. She's more than capable... after all she's solved three other cases!! However, we have a newcomer on board in the form of the new fire chief, Coop. Sexy as all get up, Coop isn't shy to show his interest for Dev, and I think it will be interesting to see how that storyline plays out in future books.

What I enjoy the most about Denise Swanson's books is she provides a fun adventure, with adorable and obnoxious characters alike, but she touches on some real issues as well. In Dying for a Cupcake, she touches on the tender subject of bullying and does it in a way that is subtle but to the point. I always turn the final page of her books, feeling like I've had satisfied of a great read and a great adventure.

Whether it's a visit to Scumble River or to Shadow Bend, you can't go wrong with a mystery by Denise Swanson.

I listened to Dying for a Cupcake on audio, and I loved it. I whiled my weekend away knitting, while I soaked up to atmosphere in Shadow Bend, and it was a fantastic listen. I've listened to all four books on audio, and I love Maia Guest's narration. For me, she is the voice of the inhabitants of Shadow Bend, and I'm hoping she will continue to narrate the books in this series.