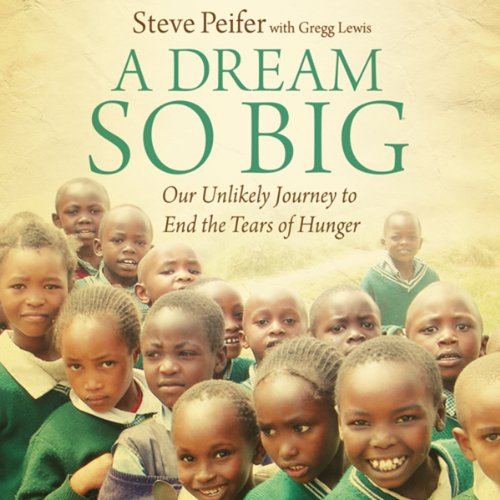 Our Unlikely Journey to End the Tears of Hunger
By: Steve Peifer, Gregg Lewis
Narrated by: Adam Verner
Length: 13 hrs and 23 mins
Categories: Biographies & Memoirs, Memoirs
5 out of 5 stars 5.0 (1 rating)

A Dream So Big is the story of Steve Peifer, a corporate manager who once oversaw 9,000 computer software consultants, who today helps provide daily lunches for over 20,000 Kenyan school children in 35 national public schools, and maintains solar-powered computer labs at 20 rural African schools.

Steve and his wife, Nancy, were enjoying a successful management career with one of America’s high tech corporate giants during the dot-com boom of the 1990’s when, in 1997, he and his wife Nancy discovered they were pregnant with their third child. Tragically, doctors said a chromosomal condition left their baby “incompatible with life.” The Peifers only spent 8 days with baby Stephen before he died.

Seeking to flee the pain, Steve and Nancy began a pilgrimage that thrust them into a third-world setting where daily life was often defined by tragedy - drought, disease, poverty, hunger, and death. They didn’t arrive in the service of any divine calling, but the truth of their surroundings spoke to their troubled hearts. A short-term, 12-month mission assignment as dorm parents for a Kenyan boarding school turned this ordinary man into the most unlikely internationally recognized hero, and his story will inspire you to pursue similar lives of service.