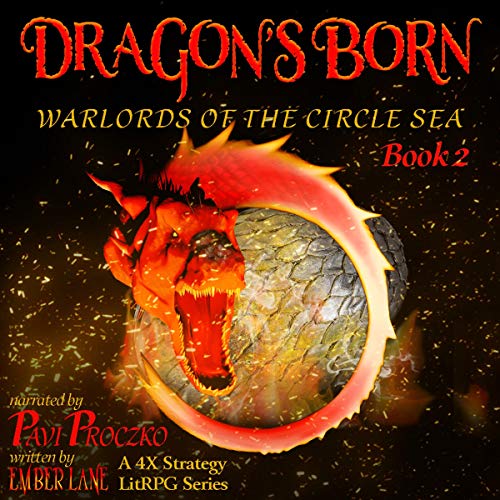 By: Ember Lane
Narrated by: Pavi Proczko
Try for £0.00

Portsmouth is being invaded.

The Soul Gate has risen from the bowels of the underworld.

Welcome to Dragon’s Born, the next thrilling installment in the Warlords of the Circle Sea 4X LitRPG series. In Dragon’s Mist, Connor and his knights explored the Land of Devon. They fought great beasts, took on epic quests, and finally built Dragon’s Mist, a city on the edge of a great falls that cuts the land in half.

You've played the games, now listen to the audiobook!

With Upper Devon secured, Gorunt ElfKiller vanquished, Ipsala annexed, it is time for Connor to expand. Will he get to Portsmouth in time to save it? What lies in wait beyond the Soul Gate? Are the rumors coming out of Dracolar true? What of his dragon egg?

The gloves are off! Now Connor must wage war on more than one front and build a civilization capable of winning.

Because there is no other option.

This is a LitRPG - Civ building fantasy tale and includes progression and settlement stats.

For lovers of 4X Strategy MMORPG civilization building games who enjoy a tale woven in the lands they spend far too much time in.

Another masterly performance by the great mr proczko, where is book 3 will there be a book 3 hats to ember lane for a riveting story, get your finger out we want there finally, 😉👍

Great action, great storytelling, great cast of characters. can't wait for the next one. Pulls you in for a great ride.

Many of the same issues I listed about book one still apply.

The Author did a little better with game mechanics.

The story was a bit more engaging with not so many one sided fights.

The hero wasn't going around having everything handed to him this book making it feel more as if he had to struggle to earn it.

Hopefully this is the author learning and developing their skills and that book three will show more improvement in this.

In my review of the first book, I gave it three stars, complaining about the pseudo-harem, the fact that we had one person's point of view, and that character development was modest at best. This second book is an improvement in each of those areas.

We move from one POV character to two. Edward gets character development, and has his own arc through the book. Action happens both through the adventures of Connor and Yosaku, and the military movements of Edward. This is an interesting development, and certainly mixes up the action. And there's a lot of action in this book.

There's no harem in this book - even if there was interest, characters are getting separated apart by their different responsibilities. And even in that first book there never comment that Connor wanted any more than one.

In terms of character development - I still don't see Connor as an incredibly deep, well developed protagonist. But perhaps I judge harshly, given that he does have points of childish behavior, points of reflection, situations of ethics, and his recklessness. And there's some things to like in the deepar development of Erin, in Edward, and the miscellaneous body language hints and conversations that come from Yosaku.

As a matter of the book's story arc itself -- the book doesn't to me feel like one that follows that so common and reasonable path of ramping up conflict and tension, until a climax / the penultimate battle or event. Instead this feels to me like a book that has multiple major events, such that tension goes up, then down, then up, then down. Perhaps that's closer to how a military campaign works.

In my opinion the book also suffers from a couple of exasperating Crimes against Medieval Realism. And I say that these are exasperating because the author seems to get quite a lot of things right.

I did like this book better than the first. There's definitely hope for quality in the third.

A large decline in quality from the first

I find that authors love putting particularly uncharismatic characters into their protagonist roles then making them leaders.

It's an interesting premise to put a gamer in this situation, but you can't forget the drawbacks. Based on how the world works, they'd have a devious understanding on how to game the systems. Good.

But he's still just a stereotypical introvert game. Conor exhibits no real charisma or guile. He's constantly talked down to and takes it, and to be honest, he's not really using his supposed 'strength' of being a gamer at all. No thought goes into his build (just throw it all into attack! etc), which is absurd. Every gamer I know can agonise for an hour over just their name, let alone the build...

Ultimately, it strains credulity too far. He's a stereotypical uncharismatic gamer, who everyone seems to follow without question.

None of these is true and it leads to a deeply unsatisfying experience for me, given the protagonist is the window to the universe.

I don't think I'll be getting book 3. I had loads of other issues too but only pointed out the one I found most glaring.

I liked book two almost as much as i like book one and finished almost as fast. I do have a particular fondness for game starts which transfers to my LitRPGs. I find the watching people learn a game ever so slightly more interesting than watching a pro at a game. That said, the characters still have a lot to learn of the game as does the audience.

Story: Secure those borders. This was a pretty non stop action book.

Characters: I like them and fear for some of their welfare. Though i get a vibe from Edward that makes me think he could go dark side (or Lancelot or whatever it is when you betray your leader for what you think is the greater good....aka you know best) at some point. Hope not, or if so there is a redemption without too much damage to others. You never know with a god of war, she may be a fan of pitting her subjects against each other or getting rid of perceived weaklings. Oh and interesting choice with Conner. have everyone tell him how important his "magic" will be beyond the gate.... and then have him derp on the choice. I mean he is a gamer, he knows mostly what everyone else will pick so there was only one choice for a balance party and that's related to what everyone told him was important. Still though, people make mistakes, good to see he is not flawless.

Narrator: Great, though now i wonder if i have been pronouncing triple wrong all these years. Odd that, still, good voices, good pace, clear speech.

Summary. if you liked the first you will probably like this. I do recommend. On to book 3.

Dragon's Born is the second book of the series. It does not let you down. The dragons have been let loose and the story gets more interesting because of that. Great book, great narrating and a great listen. looking forward to the next book.

Slightly better than the first book

This entry splits the focus between the MC and one of his supporters who is, frankly, more interesting and more intelligent than the MC himself. However, all of the "epic" moments are predictable and fall flat. I was hoping for better, but I really should not have.

Perfect if you need something to sleep to though.

As I said in my review of the first book in this series, Ember Lane possess a unique talent among LitRPG authors. These books consistently display great plot and character development, excellent plot and character consistency, and quality editing to remove grammar and logic errors. In this book Ember did it all again! Add to this the fact that Ember is writing at a speed I have yet to see in other LitRPG writers and you have the makings of a WONDERFUL source for QUALITY LitRPG reading. Thanks Ember! I am eagerly awaiting the upcoming installments.

I love this series. It has an excellent story, many interesting character, city building, dungeon diving, wars, loot...it has everything!