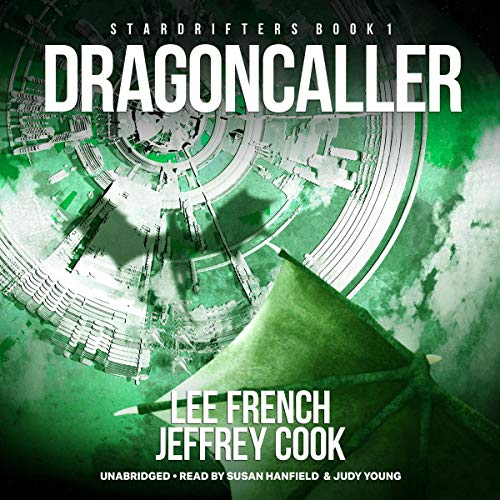 Madison Wayward, niece to the most notorious captain among the outlaw Stardrifters, has a plan. She’ll stop at nothing to give humanity a flicker of hope in its darkest hour. If she would consider pausing, her plans might not blow up in her face quite so much.

Kirehe Mahono, a skilled warrior with an uncommon gift, has a dragon. She’ll stop at nothing to protect her people from the enemy machines infesting her planet. If she had something better than a knife to bring to a laser fight, she might have better luck.

Taken prisoner by tyrannical aliens and dumped into a slave pit, both women will have to harness their strengths to survive. And escape.

What listeners say about Dragoncaller

It wasn't too bad at the start but quickly descended into a drag due to the narrators reading it like a children's bedtime story. The story itself was fine for the most part but the need to add gender pronoun worries simply made it unbearable.

This story is a nice little gem that I wish had shown up in my recommended list so that I could have listened to it sooner. The readers performances are great there are some very short audio quality drops from the start of new recording sessions which may be a bit jarring when unexpected but there is not many just be aware it will happen occasionally. Seriously get this book you won’t regret it.

Story was blah with political tones...

It was really hard to get into this story and the characters were not very intriguing. It was a chore to finish it mainly because my ocd won’t let me not finish a book. There were also some political leanings on the storyline which kinda turned me off to the whole story. Spoilers below The basic plot is like avatar in that there are natives that can talk to animals and the off world people are evil in trying to take the resources of the planet. Then there is a bit of Thor ragnorok (the movie) in that the last half of the book is based around gladiators fighting in an arena. The main characters are both female with one being a very vocal lesbian. One of the supporting characters is a transsexual that goes by they. Which good for them but the constant lesbian fantasies from one main character to another were distracting and the “they” pronoun was also distracting when it comes up. Those aspects could be easily removed and it wouldn’t let down the story in any way. It might even improve the story as the reader (or listener in this case) could spend more time focusing on the story. It would have been nice to see more world building out of the author up front as well. With such a rich environment to work with I walked away wondering why they environment of this world wasn’t used more in the book. Instead the reader (or listener) is stuck in a dreary rooms or an arena in a large portion of this book.

What. A. Ride!! awesome story, complete adventure and I desperately want more now! Madison Wayward is my favorite character because she is all brain and no brawn. Kirehe Mahono is a native skilled Dragon caller who is all brawn and learning the modern ways after living in the forest and a minimalist life. The chemistry between the two is incredible. I want more of them. Seriously need more of this. I kept hoping for a bit more each time. Lesbi-honest! love. Let's now talk about the Narrators... AMAZING!! THEY ARE ABSOLUTELY AWESOME. They should narrate all of this series however many they're. This is my first book of either author and please believe I'm about to go hunting for more. If you found this review helpful... click helpful and let me know.

I like the story and the characters. the story had a good flow and it brought me into the scenes

Hit play by accidentally. Decided to give it shot glade I did. Will be recommending it to my friends and family

loves the characters and the plot line keeps you interested and asking for more. hope the author continues the series as I definitely want more!