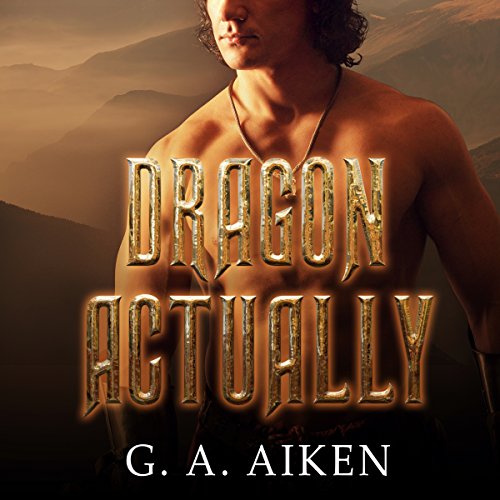 It's not always easy being a female warrior with a nickname like Annwyl the Bloody. Men tend to either cower in fear-a lot-or else salute. It's true that Annwyl has a knack for decapitating legions of her ruthless brother's soldiers without pausing for breath. But just once it would be nice to be able to really talk to a man - the way she can talk to Fearghus the Destroyer.

Too bad that Fearghus is a dragon, of the large, scaly, and deadly type.

With him, Annwyl feels safe - a far cry from the feelings aroused by the hard-bodied, arrogant knight Fearghus has arranged to help train her for battle. With her days spent fighting a man who fills her with fierce, heady desire, and her nights spent in the company of a magical creature who could smite a village just by exhaling, Annwyl is sure life couldn't get any stranger. She's wrong.

What listeners say about Dragon Actually

I've read the Dragon Kin books but really enjoy listening to audiobooks when I'm working or doing stuff around the house so got this and some others - just love this and the others, it's a wonderful way to revisit a book or hear it for the first time. I'm now addicted to rude bedtime stories for old dears :)

A Crazy, Bloody Introduction To The Dragon Kin.

It's been three years since I read Bring The Heat as an ARC but listening to this audiobook has reminded me why I wanted to read the whole series. I love G. A. Aiken's writing style and find her stories engaging. The prose she uses is intelligent and appropriate for the world and characters she's created. The pace of her plots are often fast without feeling rushed but with plenty of twists & turns to keep me guessing. I also appreciate how she concludes all the various aspects of her tales while still leaving some tantalising threads that tempt you into buying the next book.

When reading paranormal romance, I need my main female character to exhibit certain traits. She must demonstrate an intelligence, resilience, resourcefulness, self-reliance, and have plenty of Gumption. Anwyll was an amazingly tenacious woman too with a will of steel with and a wonderful wit. I must admit to have fallen in love with the stoic Fearghus almost immediately. He was dark and dangerous but his passion and capacity for love was eternal.

This audiobook also contains a second story, Chains and Flames. It's a fantastic novella telling the story of how Fearghus's parents, Rhiannon and Bercelak, got together. I was equally engrossed in their tale because it was truly a rocky path to happiness. But once again, Aiken's skill at creating awesome female protagonists and the males that deserve them kept me hooked. Rhiannon and Fearghus ticked all my boxes and I was engaged in their adventure.

I already own some audiobooks narrated by Hollie Jackson and I like the way she reads stories. The pace of her narration is good and the way she read the narrative is emotive. Hollie adjusted her voice slightly while reading the dialogue. This created different voices for the characters meaning that I was never confused who was speaking. Hollie's performance transported my into each scene.

Dragon Actually and Chains and Flames are exciting stories that brought out ALL of my emotions! Sorrow, fear, indignation, apprehension, joy and passion. 😉 I was gripped from beginning to end.

Due to the explicit sexual content and graphic violence, I'd recommend this audiobook to adults who are not offended by scenes of this nature. Readers who enjoy romance stories about the complexities of relationships, about trust, loyalty and betrayal. And of course, lovers of adventures about overcoming insurmountable odds and soul saving love.

I have read all the Dragon kin books and love them. Only the first four are audio, so more please.

Good fun easy reading, listening.
Aiken has a great sense of humour which runs throughout this series.

Two Romances in One

I liked these two stories (the first more than the second which is about the male lead's parents from the first). They are a lot heavier on the romance than I expected. The (quite graphic) romance takes up the main of the story with the actual plot and purpose of the characters taking up only a small amount of room besides. I read a LOT of romance novels and a lot of supernatural romance novels, but I still could have done with a bit more story and bit less heavy petting on this one. The narrator is good - I've listened to Hollie Jackson read several novels. Overall I thought this book lacked pep and I can't say I'm intrigued enough to listen to the rest of the series.

There are 2 stories, and both are very good - funny and entertaining and interesting. Human girl is saved by boy, boy happens to be a dragon that usually eats girls. Some explicit sex, a bit of bloody battles, lots of snark. My idea of a good story! The narrator speaks very clearly and consistently. However, that slowly gets distracting. She reads with nonchalance. She is practically unemotional. The tone of voice, while pleasant, doesn't change between angry, irritated, sleepy, happy, worried, or surprised characters. It all comes across as vaguely interested. "Oh look, it's raining" sounds the same as "Oh no, I've been stabbed and I'm dying."
I've listened to the book twice, and have sadly decided that if I want to go further into this series, I'll have to get the paper version. Ms. Jackson narrates the next in series, and I'm just not interested in the ho hum narration. It isn't so bad that I want to return the book. I'm just reminded of the awkward conversations I've had with people who don't smile or laugh at jokes, or seem to notice you asked a question. There are too many other narrators that are better.

Two books in one.

3.5 stars. Dragon Actually - A different type of romance, but not for everyone. If you have read any of Shelly Laurenston's books you know her characters are quite colorful. And with most of the characters being dragons they are a very bloody lot. I have wanted Audible to get GA Aiken's books for some time since I loved her as SL. After listening to this book I swear I have read it before, it seemed very familiar. Overall not a bad book but not quite what I was hoping for. 6 hrs. 34 mins.

2.5 stars. Chains & Flames - This is a shorter story about the parents from the previous book on this audio, Rhiannon and Bercelak. I didn't like this story as well, the chains and collar was over the top and I didn't find it sexy, only domineering. Don't get me wrong I like a little Alpha, just not to the point where the choices are taken from one of the partners and then said partner thinks it is good and wants more. This kind of story does not work for me. 3 hrs. 57 mins.

I know this is the same author as Shelly Laurenston who is extremely funny but this series doesn't compare to the Pride series, this series seems to be more on the ridiculous side. I will try the next book. The narrator was okay, but she might be part of the lack of humor since her voice doesn't fluctuate much.

I was amazed that a different narrator could so completely destroy an amazing series!!

Ms. jackson has a fine voice. Her skills and talents would probably be well suited to non-fiction recordings. However this genre does not suit.

I have all of the dragon-kin series and have re-read several. I had never considered how much a different / mis-matched narrator could affect a story.

This narration sucked all the funny from the book. How is it possible to reduce Anwyll the Bloody, future Mad Bitch Queen of Garvin Isle, etc, to a sweet person?? Where is the learing, lecherous Gwenvale? These characters are BORING!!!! Horror of horrors, I dreamt of this narrator decimating the Shestakova sisters' stories. oh, the humanity of it!!!

This narration is cold, dispassionate, and somewhat boring. I am saddened that I bought it but find grace in Audible's return policy. Thank you!

Good story dampened substantially by narration. Unengaged and nearly bored by story. Disappointing as story can be fabulous.

The narrator killed it

I swear the narrator sounds bored the entire time she is reading the book. I just couldn't stand listening to her any longer. Despite the performance, the stories themselves seems like they are quite exciting. Do yourself a favor and just read the book.

Loved it! My only complaint is that with a new narrator pronounced mamy of the characters names differently. After having listened to the previously released books multiple times its a bit irritating. however I'm still enjoyed it immensely and can not wait for the second book to be released.

The narrator seemed flat. None of the snark & sarcasm came through, and that's the icing on the cake that is this book, and what he author is known for. All the male voices, especially Bercelek were monotone, like she couldn't get it to seen male otherwise.

Good start to the series

I love this series by G.A. Akin, and am excited to have them in this format. However, I felt the narrator could have done a better job on the male characters, the way she read them was so flat and one dimensional, no personality whatsoever. If she continues to read for the series I hope she get better direction on how to bring the male characters to life.

Story was entaining, just a little repetitive. Narrator just sounded like she wanted to be done. Not many pauses for accent and no emotion.

Adore both this series and this author!

I've loved everything that Shelly/G.A. has written, and I'm totally happy that the first few books are finally being put into audio. Thank you my friend for doing this!!
Nik / Kita.