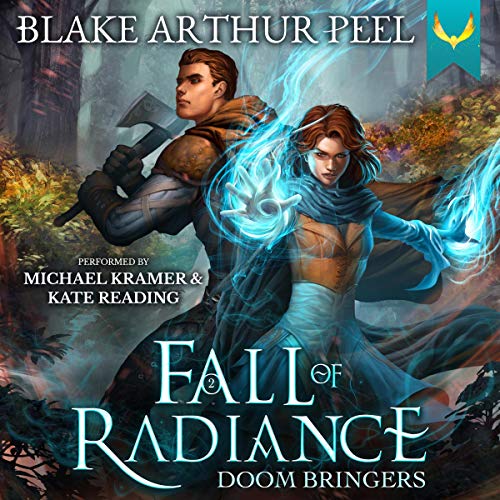 The Battle of Forest Hill is over. The war for Tarsynium has only just begun.

The demons have been defeated in the Emberwood, and Owyn and Zara must travel to the capital city of Tarsys to bring word to the Conclave. However, not everything is as it seems in the city of mages.

Assassins lurk in the shadows and whispers of demon plots follow a mysterious - and deadly - cult. The Arc of Radiance is failing, and if the heroes of Forest Hill aren't careful, they may help hasten its demise.

The epic adventure continues in Book 2 of the Fall of Radiance series. Perfect for fans of Sabaa Tahir, Sarah J. Maas, and Brandon Sanderson.

What listeners say about Doom Bringers

i enjoyed this series all 5 are okay if magic only means naplam death. it lacks depth and substance but the story is sweet... good characters, weak imagination

We are the Watchers in the Woods

The first battle with the demons has been won, but at a high cost. However, demons are not the only ones who wish to destroy this world.

Owyn and Zara return to Tarsys to give evidence to the Circle, after which Owyn is taken to Ashwood Forest by the Warden Tamara. Zara, meanwhile, remains in the Conclave, where she has been elevated to Magus and where keeping out of trouble is not an option.

This is good, solid fantasy.

I recieved a review copy of this book. The story is solid, and the narration is excellent. It continues to build the world, as more is revealed and the plot to bring down the barrier is unveiled.

Better than book one!!

And that’s saying something. I thought book one was one of the best new Fantasy books this year. I couldn’t wait for book two and it didn’t disappoint. Kramer/Reading are brilliant together and the story is top notch.

Easily become a fantasy fan with books like this. I love the narration team, easily my favorite team. A story just plays better with a male / female team.

May sound funny with death and demons, but I like that these books are clean compared to some others out there. No unnecessary cursing, darkness, and rape and pillaging.

So far both books have kept my interest. I like following the main characters and can not wait to see how they grow in future books.

The storyline is interesting with a nice blend of familiarity with most fantasy books, but still enough new imagination to keep you involved.

I would recommend both book 1 and book 2 while looking forward to book 3.

Doom Bringers was a solid follow-up to Ranger’s Oath. Lots of action and unexpected twists and turns. Really looking forward to the next book in the series.

A good continuation of the story where further mysteries are resolved, and Owyn and Zara strike off and grow on their own.

This is a nicely written story that the listener will appreciate, it has good action, and the characters grow into something more. Book two is worth the buy; it will keep the listener entertained.

THIS ONE WAS GOOOD!

The first book was good, too, but you probably already know that if you are reading this. Fall of Radiance is unique. I got sucked in about a quarter of the way through the first book. I will finish this series. I wanna know what happens

The story is not bad, but the fake teenage angst is almost sicking. If you can get past that, or blank out as much a possible then the rest of the story is more enjoyable. Don't say you haven't been warned.

My daughter listened to this book. She said:
“A refreshing and well written story, the unique style allows the reader to become one with the characters, seeing and feeling the adventure through them. I give this book five stars.”

Sequel was just as good as Original if not Better!

Found situations very similar between main characters and reactions, thoughts repeated time and time again. Heroine has real logic problems on why she "must" handle situations by herself (especially in the city).