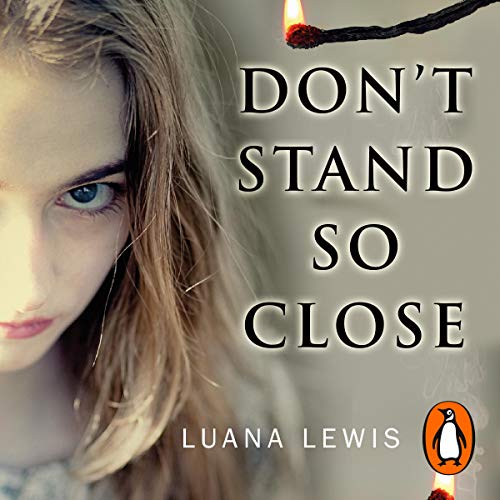 By: Luana Lewis
Narrated by: Julia Barrie
Try for £0.00

A lingering, compulsive debut novel that will keep you tightly in its grip.

What would you do if a young girl knocked on your door and asked for your help?

If it was snowing and she was freezing cold, but you were afraid and alone? What would you do if you let her in, but couldn’t make her leave? What if she told you terrible lies about someone you love, but the truth was even worse?

Traumatized by her final case as a psychologist, Stella only feels truly safe hidden away in the isolated house she shares with her husband, Max. Then Blue appears in the middle of a snow-storm, begging to be let in. As secrets and lies gradually seep out of the young girl, Stella’s tightly controlled world begins to unravel.

What listeners say about Don't Stand So Close

Showed promise in the beginning, but...

What would have made Don't Stand So Close better?

I feel like the characters were quite one-dimensional. Despite what they were going through I couldn't muster up much compassion for anyone. I feel like the story jumped around too much and this might be okay when written, but when heard this could get a little confusing. It seems like there was a much richer story to be told, at times it felt like I was listening to a second novel in a series.

What could Luana Lewis have done to make this a more enjoyable book for you?

More time could have been spent describing the characters, explaining their motivations and backstories. Stella seemed a bit like an empty shell even as the main character in the sections of the story before her trauma. Despite my complaints about the lack of depth in the novel I feel like the ending dragged.

What aspect of Julia Barrie’s performance might you have changed?

Sometimes I feel like the intonation for Blue was a bit off for example, when she should have sounded shocked she might sound flat. Whilst there's always room for interpretation this struck me a few times.

I enjoyed Peter's character, I also think that the description of Stella's rape was very well written. I felt very uneasy listening to this and it is probably one of the more shocking, desolate descriptions of rape I have ever read. It will stick with me for some time.

I hate to pan a novel, especially when it appears to be the author's first, but I just don't feel like this book lived up to my expectations at all. It's not without it's charm though and I would be tempted to listen to something else by Luana Lewis.

As a first book this isnt too bad and shows future promise. The editing and storyline needed a lot of tidying up - just how many psychopathic child abusers can you cram into a thriller? The narration was very poor with most male voices being interchangeable. Ok, I might back my payment from audible but I have lost 10 hours of my life :-(

Very good, but the American terms jarred a bit!

I would. It was an absorbing tale that moved along at a pace. I wasn't surprised to discover that the author is a Clinical Psychologist, as, speaking as one myself, it was largely plausible (although most are much clearer with their boundaries)..

Julia Barrie did an excellent job at narration. However, the editing of the narration was a bit sloppy. There were sentences repeated on at least two occasions, one because it had been misread slightly. Another just for a change of emphasis I think. In any event, the repeats were missed.

The only character I found likeable was Peter (and he was not a central character). All of the others, including Stella, I would cross the street to avoid. I think Stella was written as a sympathetic character, so other listeners/readers may not have the same response. This wasn't a problem. I don't need to like characters to enjoy a novel, but I know some readers do. For a book set in London with British characters, I found the use of American terms (e.g. Emergency room, Statutory rape) jarring. I couldn't find the nationality of the author, but I think she is British, certainly not American. If it was an attempt to appeal to the American market, I feel it was unnecessary and spoilt the book a little as it interrupted the flow. I'm sure American readers can cope with English terms describing English law etc.

The book kept me reading wanting to know the ending, well read a difficult subject but well written.

Really enjoyed the storytelling,if anything would have liked it to be a little longer withheld some more added twists

I don't think so. There are so many other books I'd recommend over this one. But it's not terrible, just not a title I'd bring up. If the whole book had been as good as the start, I'd be pushing it on everyone I know, but alas...

Would you be willing to try another book from Luana Lewis? Why or why not?

I'm not gonna make a point to avoid this author, but I'm not rushing to read her next one, either.

The beginning was the most striking, in general. With the traumatized protagonist in her house, the girl outside who refuses to go away and is eventually let in because the alternative seems to be her freezing to death.There's also another scene later on that was very well written, but I'm not gonna spoil it for you.

Could you see Don't Stand So Close being made into a movie or a TV series? Who would the stars be?

Yes, I suppose this could be made into a thriller movie. Not sure who the cast would be.

If you could sum up Don't Stand So Close in three words, what would they be?

A psychiatrist has a traumatic encounter. Instead of dealing with what happened afterwards, she sinks into a grey fog of stagnation and dependency. She presses pause on her life. But then a combative teenager girl rings her doorbell, and it brings a gust of unwanted truth into her haze of a life. The story begins with the girl at the door.

Blue Cunningham. The author really captured a troubled, seductive teenager quite well. I even felt quite sympathetic for the "adult" who mishandled the situation with her.

Have you listened to any of Julia Barrie’s other performances before? How does this one compare?

Not at first, but after a little while, for sure.

I felt a little frustrated the main character Stella didn't see more of what happened coming (it was apparent to me that her first client was a narcissist, but she didn't see it right away), and same with another guy in her life, but therapists have their blind spots just like regular people. She was still an observant therapist. So was her boss. The way it went backwards in time worked for me. I'm surprised it worked as well as it did. It felt quite smooth actually- what was revealed was revealed in time, even though the whole of it was not chronological.

The Past Comes back to haunt you

Julie Barrie & Luana did very well on the production of this book the overall storyline was actually written well. I thoroughly enjoyed listening to this Audiobook.
official review by Deanne DeVille

What made the experience of listening to Don't Stand So Close the most enjoyable?

Going from past to present and it being told from the views of the different characters.

Most of the time. It kept me guessing by only revealing a little bit at a time from different characters. Although I did guess the basic plot it was still enjoyable because of the way it was written.

The subject matter was a little dark and could be upsetting to some. The author did a good job of only giving the details that were needed without being overly graphic during the assault scenes.