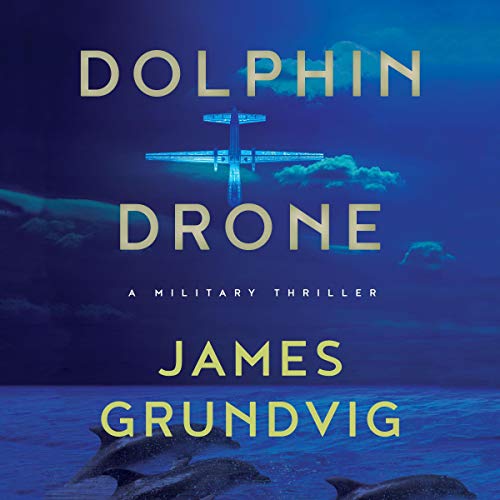 By: James Ottar Grundvig
Narrated by: Jonathan Davis
Try for £0.00

A taught, high-concept thriller that humanizes the men and women behind military espionage.

James Grundvig's Dolphin Drone takes us into the complex underworld of global terrorism with razor-sharp plot twists, remarkable characters, and fascinating insight into the technological advancements of the US Navy.

Using dolphin sonar-tracking technology, Ex-Navy SEAL Merk Toten stumbles on freshly laid Iranian sea mines while conducting surveillance on two US ships that were hijacked by Somali pirates on the Strait of Hormuz. This discovery occurs on the same day that a fake intelligence report draws three US drones away from the Persian Gulf. Toten investigates the parallel events to uncover a new super-terrorist group made up of a network of Somali warlords, Islamic assailants, Yemen-based terrorists, and ISIS sympathizers.

When Merk Toten and the beautiful CIA Operative Jenny Myung King discover a plot by this new terrorist organization to bomb New York Harbor, the duo must race against the clock to stop the devastating attack.

What listeners say about Dolphin Drone

I purchased this read as my fave reader Jonathan Davis performed it. He reads lots of Sc Fi but those are not my genre. See mystery Sandra Brown’s Mean Streak, which introduced me to Mr Davis.
I love Dolphins and thought there would be more focus on them. On ch. 30 and I can’t seem to get engaged so this author or this book just reads like a military manual for me.
I do use 1.25x speed to match the author’s intent and that is helping the story move along. There’s something missing, but I can’t tell you what.
See Mr. Davis in A.J. TATA series and Andrew Warren’s Thomas Caine series
Were my comments of help?