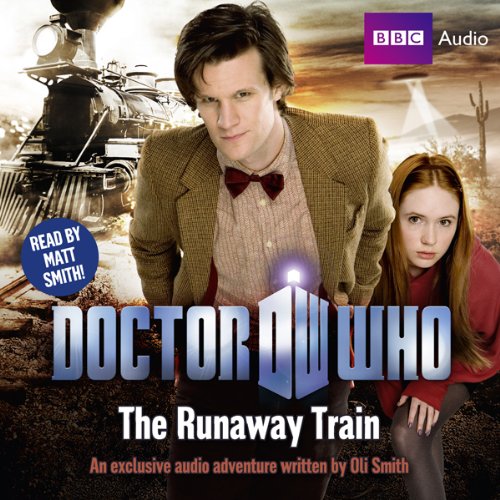 Doctor Who: The Runaway Train

Arriving on Earth in the midst of the American Civil War, the Doctor and Amy must get a posse together to help them retrieve an alien artifact that has fallen into the clutches of the Confederate Army.

The terraforming device belongs to the Cei, a race of invaders who plan to use it to turn the planet into a new home world. But neither the Army nor the aliens are keen to let the Doctor and his gang interfere with their plans, and they give chase across the Wild West. The only hope of escape for the Doctor and friends is to catch the 3.25 to Arizona and race along the newly built transcontinental railroad.

Written specially for audio by Oli Smith, and read by Matt Smith, The Runaway Train features the Doctor as played by Matt Smith in the acclaimed hit series from BBC Television.

What listeners say about Doctor Who: The Runaway Train

I know some people are having trouble adjusting to Matt Smith as the new Doctor but I think he's great and this story proves that as his narration is first class. The story is extremely enjoyable.

New adventures of the 11th doctor voiced by cast!

If you're clamouring for more adventures of the new doctor, played by Matt Smith, then you're going to love this exciting wild-west adventure. Matt does an excellent
job with voices, and the story was just wonderful. I can only hope that Matt Smith
voices more - there's nothing like narration by the ACTUAL doctor rather than
an unknown narrator.

Someone else said it was narrated by the entire cast, but it is "just" Matt Smith. And a sterling job he does of it too - especially his southern US accent.

This is the Doctor with Amy (no Rory) and Cowboys, and Soldiers.

As it is a short story is not a complex yarn, there is only the one plot, no twists or surprises, just the set up - and then racing through the story to see how the Doctor will sort everything out. Amy's character seemed precisely drawn (with her fearless, assertive style), and the Doctor's vocal mannerisms were accurate (although I may have been swayed by the narrator).

I enjoyed it. One of the best Doctor books I have listened to so far. I am hoping other books by the author are as good.

This was a boring and unimaginative story that failed to make good use of its setting (the American Civil War) or of the relationship between the Doctor and Amy. I thought it was unimaginative and boring. Matt Smith's narration is the only thing that saved it for me.

Matt does a great cowboy accent

Matt Smith does seem to be having a great time with the various cowboy accents he performs here, and it's great to hear him as Doctor Who again. Good clean fun.

I would have done 3 and a half overall I'm not really a whovian but it's still better than most DW.

Time is running out. But when you have a Time lord and his companion. ..It might not. Delightful story. Performed beautifully but Matt Smith...the much loved 11th Doctor. Take a walk in the South Western, United States and see how the Doctor. ..handles a run away train.

Another fun Dr Who

Matt Smith does a wonderful job and the story is fun. It a solid Dr Who story.

What's my favorite? This one!

It was my first book and favorite. I really like . And as The doctor says gronimo

What made the experience of listening to Doctor Who: The Runaway Train the most enjoyable?

The fact that Matt Smith read it.

What was one of the most memorable moments of Doctor Who: The Runaway Train?

The train and the fact that the railway tracks were not done yet.

Which character – as performed by Matt Smith – was your favorite?

Doctor and the soldiers.

Yes I workout while listening.

Matt Smith is awesome as a narrator

for the first time hearing Matt Smith narrated Doctor Who story I found it to be extremely enjoyable. His narration, his style and the fact that while he was the doctor, made the story so much more alive. You didn't really even notice the difference when he's changed from his voice as the doctor told his southern character which by the way was pretty good ,but also as he talked as Amy Pond. It was just a lovable Matt Smith and it was very enjoyable to hear.