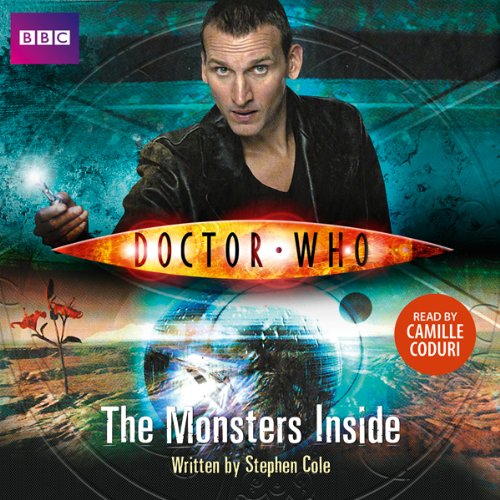 Doctor Who: The Monsters Inside

By: Stephen Cole
Narrated by: Camille Coduri
Try for £0.00

The ‘Tardis’ takes the Doctor and Rose to a destination in deep space - Justicia, a prison camp stretched over seven planets, where Earth colonies deal with their criminals. While Rose finds herself locked up in a teenage borstal, the Doctor is trapped in a scientific labour camp. Each is determined to find the other, and soon both Rose and the Doctor are risking life and limb to escape in their distinctive styles. But their dangerous plans are complicated by some old enemies. Are these creatures fellow prisoners as they claim, or staging a takeover for their own sinister purposes? Read by Camille Coduri, who played Jackie Tyler in ‘Doctor Who’, this is a gripping adventure featuring the Doctor and Rose as played by Christopher Eccleston and Billie Piper in the hit series from BBC Television.

What listeners say about Doctor Who: The Monsters Inside

The monster inside is a great story for DW fans. Perfectly narratid by Jackie Tyler

The storyline is slow to start but improve s quickly and is gripping until the end. The narrator is easy to listern to.

The Doctor takes Rose to her first alien planet where they are immediately captured, separated, and imprisoned on different planets. As Rose fights to get back to the Doctor, the Doctor uncovers an alien plot to... oh, I don't want to spoil it. The idea is interesting and we see some familiar baddies, but the execution just didn't work for me. Because the Doctor and Rose are separated, what we essentially have are two different stories and almost no interaction between the two main characters. Another problem is the story drags on far too long. Three times I thought the story was wrapping up, only to see that I had several hours of book left to go. Normally, this would be a good thing, but not here. I should have loved this, but I didn't.

That said, I also didn't hate it. The author did a great job of keeping both the Doctor and Rose in-character. We see Rose cope and rebel in a hellish environment and we see glimpses of the Ninth Doctor's soft, compassionate side (always a nice juxtaposition with his normally prickly and hardened demeanor). I also enjoyed some of the original characters in this story. And, as always, Camille Coduri knocks it out of the ballpark as the narrator. I would recommend this story to fans of the Ninth Doctor and those who really enjoy Season 1 bad guys.

Where does Doctor Who: The Monsters Inside rank among all the audiobooks you’ve listened to so far?

Compared to the other Doctor Who books I've listened to, this one is in the top half.

This was a solid doctor who book. The story would have been a two part episode had it been made for TV. It also makes sense within the context of the 9th doctor's one season. The themes and resolution of the story make sense and feel like the first season of the new who tv.

The sonic runs out of batteries?!

Mostly this just felt like an excuse to revive a potential foil. Was there no vinegar in the kitchen??

Not my favorite although i enjoyed it. The story is a little bit rambly. Recommended to dr fans but probably not a second go through