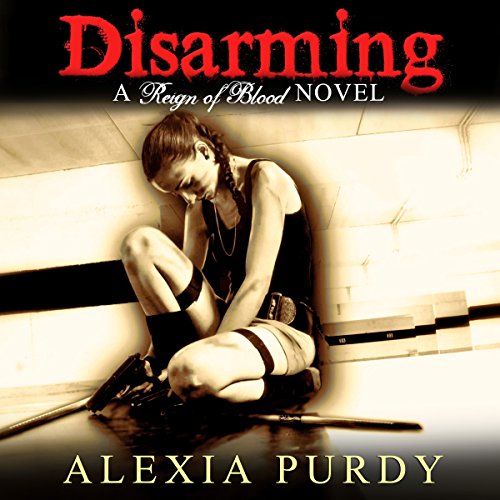 Book 2 of the Reign of Blood series.

The world has changed. One must adapt to survive or hold on to the crumbling shards of humanity.

April continues to hold her fragile world together, but the ties that hold her family together are quickly unraveling. Rumors of a massive human underground settlement draw her to the shadows of the city once more in search of other survivors more like her, even with the hybrid vampires opposing her every move.

The darkness hides secrets along with the continued threat the Feral Vampires create, but a greater evil hides within the city. Something tells April that the humans will be less than welcoming of her, and that's if she can find them before the Vampires do. Joining sides with the enemy might be the only choice she has left.

What listeners say about Disarming

This book was exciting and answers some of the questions that I had from the previous book. It has plenty of adventure and action.

If you love vampires and want a little different take on them this series is for you!

If you could sum up Disarming in three words, what would they be?

I love the world and the characters! I adore how, just when you are sure you have the score, some new group pops up out of nowhere! This world still has a lot of secrets to explore and I can't wait :)

What about Anne Marie Susan Silvey’s performance did you like?

Anne Marie Susan Silvey’s performance gets better with every book as she truly gets to know the characters! She brought out April's snark and confused feelings superbly. I think she is doing a great job with this series :) I can't wait to hear what she does next!

If I had to pick just one... I would say when Ry and Miranda decide to flout Blaze's orders to find April. It was a very intense moment and proved they cared more about their friends than some arbitrary decision.


Murphy's Law truly describes the world now... Whatever can go wrong WILL go wrong! April is stuck with her mother Helen who has retreated into agoraphobia and distanced herself from her children and the world to the point of complete introspection and self loathing disinterest. Helen will not even allow April to see to her grooming needs. April does not know what tortures her mother endured at the hands of Christian's Hive but she wishes her mother would snap out of it already! She(April) is just waaay too young to be the mother/teacher/protector/decision-maker for her family of hybrid humans! After all she is just 18!!! The new world order is no order at all with feral Zompires around every corner and more mysteries surfacing every day... Why can't she bring herself to commit to Rye? What is she going to do about her mother Helen? Does she really have a say on the Hive's ruling council or is it just for show to keep her around(she is after all the salvation of the hybrid vampires as she carries the cure to the wasting/rotting disease in her blood)? Will they ever find out what caused this terrible plague of death/undeath? Who or what is mass exterminating the Ferals? Or are they just committing mass suicide?


This book has the romance as a major issue for April to deal with... so I definitely would not consider this in any way a romance novel lol. The thrills and chills are a good spice for all the action and adventure. While the mysteries definitely make you want to yell at April to just mind her own business and stay in her quasi safe world instead of poking at every little thing that is new or different or confusing! I felt like the kid in the theater yelling at the girl on the screen "don't do it!" Alot of the time reading this book. The humor is present throughout even if it is of a Much darker flavor this time around :) I really enjoyed this book and can not wait to listen to the next one Amplified (Reign of Blood #3) or maybe Elijah (The Miel Chronicles) (A Reign of Blood Series Companion) the companion novella! I havent decided which yet ... But whichever I read I know it will be Awesome :)


***This series is suitable for mature young adult through adult listeners (or readers) who enjoy post apocalytal horror adventure survival coming of age stories with a bit of romance and loads of suspense :)

Words really can't express how much I love this series. I love the fact that the vampires aren't overly romanticized. I love that they are good as well as evil The characters are strong and real. I also love LOVE the emotion the narrator puts into the words. Looking forward to reading the next book.

I just can't say how much I love this series!!! This book 2 takes you down a whole new oath with trust and turns you don't see coming. April is one of the strongest characters ever written. At first I wasn't thrilled with the narrator as I didn't think she did April justice. But she was great with all the other characters and I quickly became to absorbed to notice.