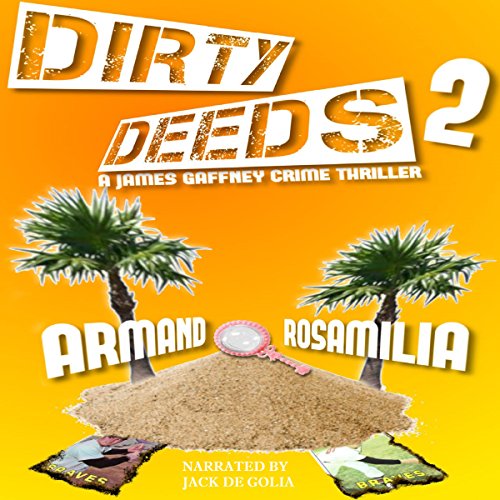 By: Armand Rosamilia
Narrated by: Jack de Golia
Try for £0.00

Everything was going smoothly until my past caught up with me. Now, I'm being taunted by a madman who knows more about me than I do. He's kidnapped the closest person in my life, and he is using it to get my attention. Trust me...he has it. Now, I just need to figure out where he is and when he'll strike again. Things were easier when I was only kidnapping children.

What listeners say about Dirty Deeds 2

The second Dirty Deeds book, I think there are nine in all and I'm a bit meh.... about it.

I've really enjoyed some of this author's work in the past - Belford Stories and one of his Flagler Beach collections which mainly concern.... people, relationships, everyday life, hopes, disappointments and dreams. The Dirty Deeds books are more crime oriented and feature James Gaffney posing as a child kidnapper, but actual saviour, crossing paths with the FBI, the mob and various other deviants who want their children gone and the opportunity for a different life unencumbered by responsibility.

I quite like James as a character. I enjoy his interactions with Reggie Keene (possible mispelling, because I've only enjoyed these as Audible books), the FBI agent trying to nail him. I like his banter with assistant, Marissa (?), the woman who sets up his jobs and organises his life for him. There's humor in their dialogue, sometimes funny, sometimes causing my eyeballs to roll into the back of my head. Overall a plus in the books.

There's a couple of things that are less enjoyable really. Secondly, book one, kind of climaxed at last chapter minus one. The last chapter set up Marissa's kidnapping as the hook for Dirty Deeds 2. The end of this one has a similar set-up. Actual story ends again at last chapter less one and the hook for #3 in the series (one I'm listening to now) is the final chapter. I think this is one of my pet hates as a reader. Rosamilia is not alone in doing this, but it does irritate me.

Biggest bugbear is probably a weak plot. There's a fair bit of fannying around where the villain, the kidnapper plays games with James. He has an issue with him, just cut to the chase confront him - kill or be killed and save me the mindless guff in between. With the support cast of a couple of mob cronies - one a hacker, one a mob enforcer and with instructions to also do away with James and his hacker best friend we have a goose chase around Florida before a return to Atlanta for a climax. The Florida scenes which form a lot of the book, mainly involve Chaz the enforcer eating, wanting to eat, ruminating about his next meal or talking about meals he has enjoyed in the past. I think I must have put on a couple of pounds every time Chaz featured in a scene. It kind of got old very quickly.

Narration was good. Settings - Florida and Atlanta were enjoyed. Characters were more hits than misses. Story/plot/set-up - not great. Pace was ok. A lot of padding maybe to support a story which in my opinion was a bit too much of a stretch. Execution - a bit disappointing.

Overall - probably just a 3. I didn't actually hate it despite my reservations, but it didn't blow my socks off either. I'm obviously in a minority - 19 reviews showing on Amazon UK - 18 x 5 stars, 1 x 4 star.

Belford Stories and JandJ Fitness, as well as Dirty Deeds have been enjoyed before.

good 2nd book , cleans up nice and leaves you with the hook in the mouth.
Jack is awesome 👌

Dirty Deeds 2 throws us in right where book 1 ended and really doesn’t let up throughout the whole book.
It continues with the charm, humour, depth and tone of the first book while moving the story along at a pace which in lesser hands would have been a mess.
I’m two books into this series now and fully sold. Next one please!

Dirty Deeds 2 by Armand Rosamilia and narrated by Jack de Golia picks right up where the cliffhanger ending of the first book left us. Marisa is missing and James has his world turned upside down while at a sports card show. He gets a call from someone going by the name of Harry claiming that he has Marisa and is going to kill her and destroy his life and everything in it. He is one of the children James had rescued. James knows Harry is not his real name. Nor can he understand why Harry would do this sort of thing to punish James after he gave him a new life and got him out of a bad situation.

Harry is bent on destroying James Gaffney’s life. All while impersonating James online and keeping James penniless in the real world. Without Marisa to handle the electronic stuff he must turn to Chenzo and ask a favor to get the only other hacker he knows who can help save Marisa, Marco; who is on the run from the family. James is saddled with Marco’s best friend in the family a bruiser named Chazz. The hunt will take them to Florida where FBI Agent Keene again just happens to find himself in the middle of James world. All while Harry set’s tasks for James to complete or he will kill Marisa. So begins James new challenge to find Harry, save Marisa, get to Marco and get his help before Chazz does something stupid, and avoid Agent Keene inquiries to questionable past.

The narration is provided by Jack de Golia. Mr. de Golia does an incredible job narrating this audiobook. I have now heard multiple performances from Mr. de Golia and he always delivers a consistent stellar performance. These characters are diverse and each unique in this audiobook. His performance of Chazz in this audiobook is still stuck in my head days after finishing the book. The production value is of a high quality. The book was clear and crisp through the entire program.

As good as book 1!James removes kids from bad situations and moves them to good homes.This is what he believes.So why is one,now an adult,trying to kill him? Jack de Golla was the perfect narrator.I was given this book by the narrator,author or publisher free for an honest review.

I enjoyed all the suspense and drama. The connection between the detective and Marissa was heartwarming. Harry made me furious for many reasons, but mostly because of his greed and selflessness. He wanted what someone else worked a lifetime to achieve but not the all the good the detective had done. A true psycho. I HATE the way these stories end with major cliffhangers. Not cool. I voluntarily listened to a free copy of this and am giving an honest review. The narrator did a great job bringing it to life.

Humor awaits with this series by the author.The characters are characters one of a kind, unique, and different. As is the plot, almost nori like in style.
Given audio for my voluntary review and my honest opinion

Picks up right where the last one left off and ends by leaving you rushing to get the next one. It's a nonstop thrill ride through to excitement filled, action packed, life of James Gaffney. Definitely worth the purchase!

Thankfully, this book picks up right where the cliffhanger from book one left off. This is another fast paced action account, but with a lot less baseball. You might want to get some Oreos on hand before you crack the cover because you'll definitely have the craving for them at a few points in here. The only small complaint I have is that there's another cliffhanger! If you're going to commit to the series you should get all the books at once so you don't have to die from anticipation.

I love how the narrator being the story to life, making me picture Steve Buscemi as the main character.

I received a free copy of Dirty Deeds book 2 By Armand Rosamilia , and narrated by Jack de Golia in exchange for an unbiased review. This review copy Audio Book was provided by the author/narrator/publisher free of charge via Audio Book Boom.

I found Dirty Deeds book 2 as enjoyable as book one. This book has a little bit of everything in it. It has a Mob guy, a hit man, a kidnapping, a pc hack, a cop, and a kid gone bad. What more could you want? The author kept the story moving fast, and pulled it all together nicely. The story is unique, and was very entertaining.


We start where we left off with Melissa being kidnapped. So starts a frantic journey for James with no Melissa, no money and no homes as he tries to rescue Melissa and not get killed while also having an FBI agent on his trail. Having read Belford stories then are links to that series and mentions of the actual author that made me laugh. Well written and there is book three that I can't wait to start.