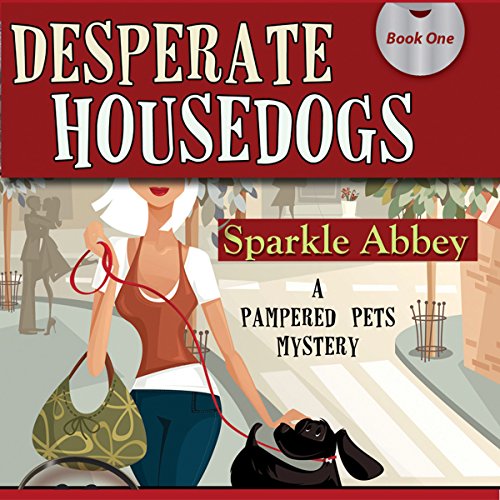 In posh Laguna Beach, murder has gone to the dogs.

When Caro Lamont, former psychologist turned pet therapist, makes a house call to help Kevin Blackstone with his two misbehaving German shepherds, she expects frantic dogs; she expects a frantic dog owner; she even expects frantic neighbors. What she doesn't expect is that two hours later the police will find Kevin dead, his dogs impounded; and that as the last person to see Kevin alive (well, except for the killer) she is suddenly a person of interest, at least according to Homicide Detective Judd Malone.

Detective Judd Malone scanned my living room, his baby blues taking in my overstuffed couch, easy chairs and crowded bookshelves. My cats, Thelma and Louise, perched in the window sill, replete with tuna. Each opened an eye and then, unimpressed, went back to their beauty sleep. Dogbert climbed from his doggie bed, trotted over for a sniff, but then also dismissed Malone and went back to his nap.

"Can I get you something to drink?" I asked.

Some hospitality is automatic. Even when you have an unannounced guest. Even a guest who might arrest you. He shook his head and continued his scan.

"Well, then. What can I help you with, Detective?"

"Yes, I did. I'm the behavioral counselor for his German shepherds. What about Kevin?" I had a really bad feeling about this.

Sparkle Abbey is the pseudonym of two mystery authors (Mary Lee Woods and Anita Carter). They are friends and neighbors as well as co-writers of the Pampered Pets Mystery Series. The pen name was created by combining the names of their rescue pets - Sparkle (Mary Lee's cat) and Abbey (Anita's dog). They reside in central Iowa, but if they could write anywhere, you would find them on the beach with their laptops and depending on the time of day either an iced tea or a margarita. Visit the authors at www.SparkleAbbey.com.

I was hoping for more humor in this story. There were a couple of funny moments, but not laugh out loud. The story was very good. I learned more about dogs behavior than I wanted to know, however it made for an interesting story.

Purchased on the cheap as Whispersync courtesy of ereadernewstoday.
Silly, fun cozy mystery about folks waaay above my pay grade living in Laguna Beach, California! Start with a snoopy divorced Texas heiress who has a zany family, and is on her second career in psychology--this time for PETS! Add in a murdered client, a dishy police detective, and a crazy cast of very many, and you have the perfect read for a day when you are trying to leave the pity party for a fun place.
The story is twisty, the narrator captures the snark, and the Texas drawl is clear enough for non-Texans to comprehend. Fran Fuller doesn't fall all over herself trying to emulate all the male voices, yet the listener has no trouble keeping track.

Too much accent spoils the story

The extremely sing-song accent of the book performer is so abrasive, I can't attend to the plot. And for the record, I've lived in southeast Texas for years, and I've never heard an accent like that. And we have a lot of accents: all ethnicities ( and urban and country versions for each.) Also, Texas beauties do not refer to themselves as "Southern". They are "Texan" and proud of it. Just for the record.

Narrator destroyed what might have been a good sto

The narrator destroyed what might have been a good story. The Texas accent and her interpretation of the main character's personality ruined it for me. I really tried but I just couldn't finish.

A Cute Light Mystery with Dogs

In Desperate Housedogs by Sparkle Abbey, Caro Lamont serves as a dog psychologist, especially amid the elite in Laguna Beach, so she gets called to visit the home of Kevin Blackstone, owner of German shepherds Zeus and Tommy Boy, who have been going wild barking but refusing to go outside for two days. After working with the dogs for a little while, Caro stops to visit her closest friend, Diana Knight, a grandmother figure former celebrity who has turned into a passionate animal advocate. The two have been planning the "Fur Ball" to raise money for rescue animals at the local shelter where both are very active volunteers. Soon after arriving home from these visits, Caro gets a visit from Detective Judd Malone, who informs Caro that Kevin Blackstone has died under suspicious visits. Caro begins to snoop, getting involved in ever riskier and even illegal behaviors as she digs up more clues. But then Diana gets arrested, raising the stakes even higher, especially as Diana refuses to allow anyone to bail her out. Instead she uses her incarceration as a platform to get interviews with anyone possible in order to promote her fundraising for the animal shelter. Thus, Caro determines to investigate further to find the truth.

This book, a fairly light cozy mystery, has enjoyable details, but I didn't find it especially memorable. I liked the details of the dog psychologist and all the information about different breeds of dogs. Some of the dogs such as Zeus and Tommy Boy show real character, though others show less. The mystery plot did have some interesting details, but I did feel that the conclusion arose with a bit of a surprise. Though the murderer was a regular character, the solution came without any hints to it in advance. One of the best parts to the book is the character of Diana, who really shines and creates a lot of fun moments in her activism.

Frances Fuller performs the audiobook narration of this book. She does an adequate job, and I found her voice pleasant enough, with a gentle Southern accent, which I suspect is lighter than the typical accent from Texas, where Caro comes from. But I also noticed her mispronouncing several words, which became bothersome at times.

Desperate Housedogs is a fun book, especially for lovers of dogs. It shows real promise for future books. But at this point, I give the book three stars.

This is too light and fluffy for me. There is too much attention on name brands and the lead character is not very bright.

Even though this was a lower priced book, it sounded like it would be funny. The wanna be southern voice is terrible. The story is so dumb, it is a turnoff from the very beginning. I would not recommend this book.