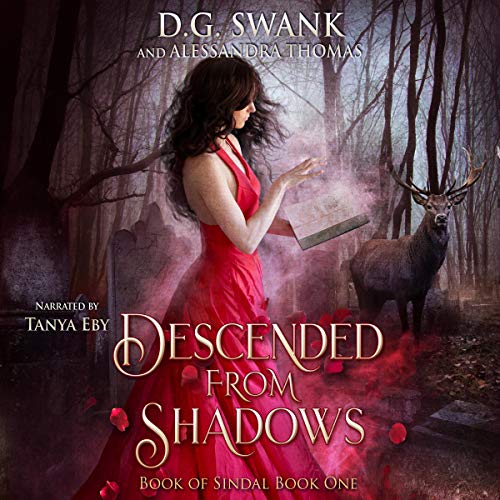 Descended from Shadows: Book of Sindal, Book One

For centuries, Phoebe Whelan’s family of witches and mages has guarded the Book of Sindal, a tome filled with spells so evil it could destroy the world. After their parents’ death six years ago, it’s up to Phoebe and her older and younger sisters - Rowan and Celeste - to guard the book with their magic and their supernaturally fortified land. But Celeste’s expression magic is wild and untamed, and without their mother’s calming influence, Celeste is slowly going mad.

When the book - and Celeste - go missing, the Valarian Small Council believes Celeste stole the deadly book of spells. When they assign Captain Brandon Cassidy, the head of the Magical Protective Force and Phoebe’s former high school crush, to look for book, things get a whole lot more complicated.

Soon it becomes apparent a dark force has taken the book, which will open only with the blood of all three Whelans. The Dark Set has the strongest sister; now it needs the blood of the other two. Brandon’s mission quickly changes to include her protection, but Phoebe’s goal has remained the same - find the book and her sister, prove Celeste’s innocence, and let nothing get in her way, including her reawakened feelings for the man at her side.

What listeners say about Descended from Shadows: Book of Sindal, Book One

As usual, I LOVE the story! But the narrator ruined it for me. Decided to read it in Kindle format instead of listening to it.

Wow! A new series from my favorite author.

What a fantastic first book of this series! I was totally hooked from the very beginning. Descended from Shadows is about 3 sisters/witches Phoebe, Rowan and Celeste and a magic book filled with evil spells that goes missing . Loved loved this series !

I devoured this book!! If I didn’t have other obligations I wouldn’t have put it down for a minute!!
I have to admit I was a little torn up on who could be trusted and I trolled DG Swank’s fan page for spoilers. ;) I didn’t find any.

Holy crap was this book good! What more could you want?! Witches,mages and DG Swank,can't go wrong! Danger, romance and history of magic. Awesome powers I could never imagine! Can't wait for the next one!

This book is O.M.G., unforgettable, and a page turner. You ever come across a book and when you have to put to down you are constantly thinking about it or even dreaming about it? 🙋🏻‍♀️
This book IS that GOOD! It is phenomenal!!
It has a little bit of everything! Great plot, new awesome characters, and great writing. Revelations were coming left and right, and man was it a nail bitter! So intense. I absolutely loved it! Don’t be hesitant to try this new series. It is out of this world and you will not regret it! It will sink its hooks into you. It is amazing!! Bravo ladies!!
If you enjoy paranormal romance then this series is for you!!

fast-paced and full of magic. I really enjoyed this book and look forward to book #2.