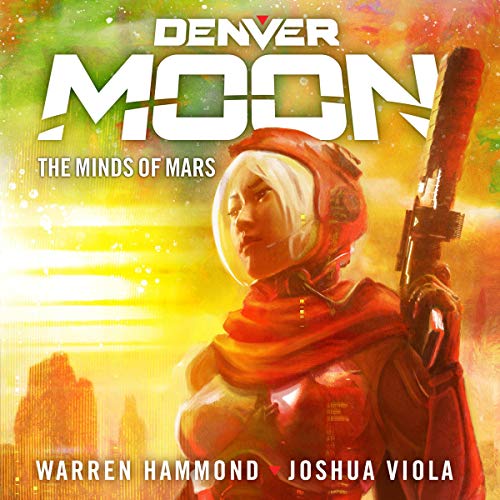 Book One in the Denver Moon Series

Earth is dying. Luna is uninhabitable. Mars is our last chance.

Once considered humanity's future home, Mars hasn't worked out like anybody hoped. Plagued by crime and a terraforming project that's centuries from completion, Mars is a red hell.

Twenty-year-old revelations force Denver on a quest for truth, but Tatsuo's former friend, Cole Hennessy, leader of the Church of Mars, has other plans and will stop at nothing to keep Denver from disclosing Tatsuo's secrets to the world.

Hell-bent on reclaiming her grandfather's legacy, Denver - along with her AI implant, Smith, companion android, Nigel, and shuttle pilot, Navya - set out on a quest to find the answers they hope will shed light on the church's true agenda, the origin of red fever, and the mysteries surrounding Tatsuo's tragic death.

What listeners say about Denver Moon

"Mars is in great danger. You must find me."

On Mars, a vicious plague, the Red Fever, which turns the victim into an psychopathic killer, had just taken eleven of the original settlers in the previous two days and investigator Denver Moon was just in time to find the two people she loved almost as parents had also succumbed, one murdered by the other, now mad, woman. And at that moment she received a message - from the grandfather she believed dead for twenty years. A message asking for her help.

This is an intriguing, drag the reader in from the very first moment, engrossing story of conspiracy and the unexpected. Set on Mars, still as yet unterraformed, the population struggling to build their future in the face of a near dead earth, Denver's grandfather had been one of the original settlers and her surrogate father after her parents died when she was only one. Twenty years ago, he too was declared dead although his body wasn't found. Smith, her A.I., was the one to deliver the message. Her subsequent reaction from the basis of this unusual novella. The characters are colourful, the action exciting and keeps the reader guessing. Narration is split between Amanda Day, who performs the first person delivery of Denver's story with panache, well modulated and paced with just the right amount of emotional input, and Nicholas Cain expertly reading the parts of male protagonists and a few other non Denver inserts. Together their teamwork provides a very enjoyable, easy listen and satisfying delivery of the book.

My thanks to the rights holder of Denver Moon, first in the new Minds of Mars series, who, at my request freely gifted me with a complimentary copy. Definitely recommended to anyone who enjoys Science Fiction thrillers. I will be looking out for book two with enthusiasm.

I love sci-fi and the story was short enough to finished during the day. I loved the narrator.

I want to know more?

Its a short story of 4 1/2 hrs listening time BUT the narration was excellent and it was hard to stop listening to, so I didn't, I listened till the end and want more.

Looking forward to the next book.

This is a superb Sci-Fi adventure, the writing is exceptional creating a wonderful selection of great characters and setting them in a intelligent engaging storyline. The narrators are perfect really giving the story life. I am hoping that there will be a sequel soon. I was given a complimentary copy to listen too

I was given a free copy of this book, I am leaving an honest and voluntary review.
Its an engaging story, nicely paced, the characters are great. the plot is well thought out.
the narration is superb.

This was a great sci-fi and a rather different from what I am used to reading. There were lots of twists and turns in the story and I was always anticipating what was to come next. The pacing was good and the world building was phenomenal. Very well written and well performed

Pretty good but not satisfying

I was given a free review copy of this audio book, at my request, and am voluntarily leaving this unbiased review.

If you're the type who doesn't like that the bad guys will give away their plans, this book is for you.

This book is about a detective on Mars. A disease is hitting the planet, and its a bad time to be a human.

The setting is done, fairly well. I got the sense I was there, but it wasn't vivid, more of a vague idea. It's good enough for the story, but it could have been more in depth. Rock color, floor dirt or some sort of paving, etc. The general things that change the story from "I remember" to "I was there!"

The main character was well done. Denver felt like a true person, in emotion, back ground, thoughts, preferences, etc. Her AI, Smith, was almost as well done. He was given a proper presence and purpose, with emotions and thoughts. The secondary characters, were introduced later in the book and were not as well gone into, however they didn't feel hollow. The antagonists were fairly complex, and while motivations were not well explored, the characters did show depth and thoughts and were not just there to pin the blame on.

The biggest problem with the story was the plot. It was well thought out and paced well. However, it wasn't satisfying. None of the antagonists really revealed anything, even by the end of the book. Parts and pieces are revealed, but not enough of the story is explored to really feel satisfying.

The voice narration by Amanda Day and Nicholas Cain is fairly well done. Amanda takes care of the main character, as well as the other (limited) female characters, while Nicholas Cain does the male voices. The conversations between Denver and Smith are done with a synthetic sound effect, which is a nice touch. Both do a good job of giving each character a unique voice. Its an oddity to do 2 narrators, simultaneously, and it is done well.

All in all, a pretty good book, with an interesting story and some good voice narration. The ending/mystery solution wasn't satisfying, and a lot of the issues could have been solved by characters just telling each other what they knew.

I likely wont actively seek the subsequent books, but if i come across them, I will like continue this series.

Fast adventures on the red planet

This book was given to me for free at my request and I provided this voluntary review. The story hits the ground running and never stops to take a breath. It's a thrilling detective story, following the main character and her collected fellowship of friends along the way. While it would have been nice to see the world fleshed out a bit, enough references are certainly made that there is an untold history there, it stands alone quite well and makes a great start to a series.

I really enjoyed this story! Had a lot of twist and turns! Wonder what it would be like to live on Mars! Narrator was good!

I enjoyed this story. It reminds me of something from Outer Worlds/Fallout. The narration was awesome, a true performance and it pulled me in. I would absolutely recommend this to sci-fi fans!

I received an audiobook for review; all opinions are my own.

i loved this story! I loved every second of the adventure! they take you on a ride make you think you know what is going on then twist it on you! it was great!

This is short, but packed with excitement. Great writing and narration makes this a very entertaining tale.