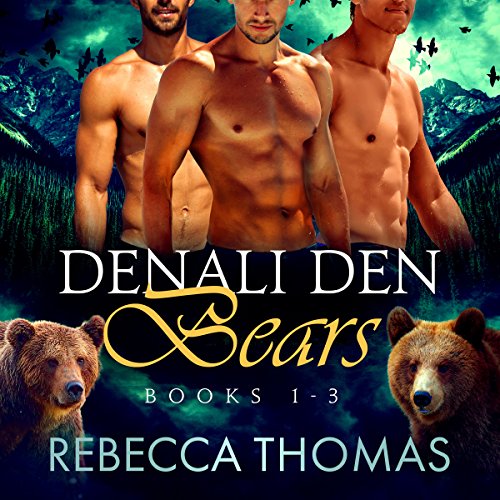 By: Rebecca Thomas
Narrated by: Teri Clark Linden
Try for £0.00

The Denali Den series now available as a boxed set for the first time!

Are you ready for the Denali Den Bears to melt your heart and make you laugh?

Beauty and the Bear

For werebear Silas Vane, finding his True Mate has proven more difficult than he imagined and he's getting grouchier by the minute waiting for her to come along. When a nosy, new hire starts asking questions about why he wants to marry so badly - he tells her - so he can have sex every day!

Silas gets the surprise of his life when she offers to be his sex once-a-day girl. It's a deal he can't refuse, only she's a human, and things could get complicated.

Wed to the Bear

Werebear Stryker Vane volunteers to pick up his brother's soon-to-be-wife at the airport. What he doesn't anticipate is a last-minute phone call telling him the wedding is off. Stryker expects a heartbroken she-bear, but the curvy brunette with intriguing green eyes and spunky attitude is nothing like he imagined.

Bound to the Bear

Werebear Stefan Vane has a job to do - protect his witness. He devises a plan to keep the stubborn she-bear at his family's remote wilderness therapy camp. Her identity must stay secret. They agree to pretend they're a couple. But her smart mouth and sexy curves are distracting. He'll do whatever it takes to make sure she's safe, only he never expects the lines between what's fake and what's real to become so blurred.

Each of these books may be short but they have a lot of story packed into them. There is plenty of humour and heat and it just makes a really fun read. The narrator was a great choice

Each book is a sweet tale

Denali Den Bears
Love the way Lexie brazen enough to ask for what she wants and gets it. He is such a meathead and just needs to have a come to Jesus moment. Cuz he loves that girl!

Striker knows what he knows and Ava just needs to catch up with him. They are so good for each other.
Stefan

Each book was a sweet tale to take you away from this crazy world.
#MyBookObessionApproved

What a great shifter story! This is books 1 through 3 and they are fantastic storyline the only down fall is that they are short. I’m glad I bought the box set it’s well worth the credit. The stories are well written and narrated.
The narrator does a fabulous job with the characters and voices of each character which makes it easy to distinguish between characters. I love when a female or male narrator is able to do both male and female voices. She does an amazing job. I definitely recommend this audiobook and the narrator.


This book contains three stories about three Vane brothers. These brothers each find their mates. Their mates are very strong women. This book was thoroughly enjoyable. Teri Clark Linden did a great job with the narration. I received this free copy audiobook at my request and have voluntarily left this review.

Omg! This is my frist time reading/listening to a book from Rebecca Thomas. I had the audio verison of this book. These books are about three brothers, who is Alaska bear shifters finding love.
1. The first book is Lexi and Silas's story. Lexi is a feisty, likeable young woman who just finished grad school and takes a job in Alaska. Silas is the grumpy, good-hearted, and gorgeous camp co-owner and cook. He is also a were-bear. Silas is dead set on to get a mate. That he is even going thru with a online dating site that is made just for shiftes. He wasn't prepare for Lexi to come inti his kitchen. I love the chenistry between them.
2. The second book is Ava and Stryker's story. Ava is the one that Silas met online. She was suppose to be mated to him, but life has a way into throwing a wrench into the plans. Stryker was going to be a good brother by picking up Ava from the airport. Once Stryker saw her, it was over for him. Ava was Stryker's mate. I love it took Ava awhile to see that he was right. I think so far this one is ny favorite one so far.
3. Finally the third brother Stefan and Tessa's book. Stefan is a good-natured, honorable, honest guy who is dedicated in being an undercover cop. Tess is a strong, sassy, stubborn, woman who works making and maintaining costumes at a strip club. When Stefan boss gave him an assignment while he is on a vacation. He needs to watch out for Tessa cause her life is in danger. They both happen to be were-bears living in Alaska. I love the chemistry between these too.
You will have to get these and read them for yourself. You will not be disappointed in them. It will hooked you into just like me. I can't wait to read more from this author. Keep up the amazing job!