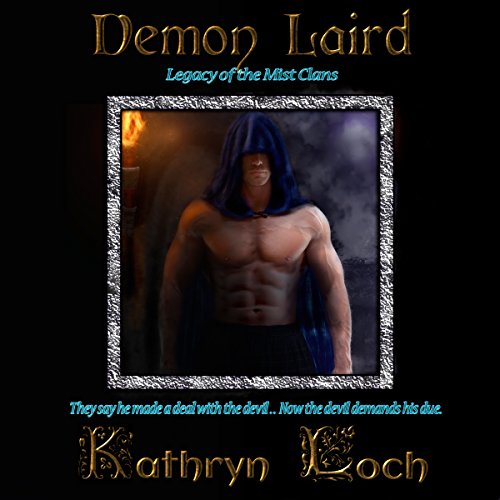 Captured and tortured by the English during Longshanks' war against the Scots, Ronan MacGrigor finds the strength to escape only to suffer the fear and rejection of his own clan. Forced to stalk the shadows at night, Ronan becomes a prisoner of illness, fear, and memories. Fearing for his life, his brother summons a healer whose reputation borders on that of a miracle worker, but she comes from the land of the Sassenach, the very people who tried to destroy Ronan.

A foundling, Lia knows little about wars or politics; she knows only how to treat the wounds they create, and her dedication to healing knows no borders. But the Demon Laird cannot abide a Sassenach within his home, and when a mysterious plague strikes the villagers, he looks to the woman of an enemy nation to be its cause. Even in the face of Ronan's hatred of her and the superstitious fear of the clan, Lia knows she must stand for the truth.

Despite their fear of him, Ronan's only goal is to protect his clan from the vicious war raging around them, but when the enemy is at his gates, the Demon Laird must answer. Lia wages her own war, that of healing the soul of a tormented laird - where all others have fled in terror, she refuses to run.

The villagers whisper of a curse - the Demon Laird made a deal with the devil - now the devil demands his due.

What listeners say about Demon Laird

The author, Kathryn Loch, drops you into a scene leaving you gasping with feelings of total loss. She certainly held my attention from that first scene to the end of this lovely listen.

This is a story where friends hold true even when grave mental changes pull the friendship so taut, it could easily snap. Laird MacGrigor, Ronan, goes through terrible internal pain with flashbacks of his time tortured by the Sassenach. He feels he’s losing his mind and with it his soul. He rather suffer than try to get help—for fear the physicians will think him possessed. He has had moments of being lost, but worsened after this time of torture. When the heroine, Lia, a Sassenach, travels far to come to his aid, he wants her sent back. How dare his friends bring a Sassenach to his castle?

But beautiful Lia is special, well versed in the healing arts, with a compassionate manner which encourages the clan MacGrigor to trust her. She is a gem inside and out, nor does she become involved in the politics of the area. She is pure of heart, full of compassionate for the injured and in need. She learned all she knew from a very wise old woman who couldn’t travel such a distance to care for the Laird.

However much Ronan didn’t want to admire and respect Lia, he came to understand she was sincere in her aid to him and to his villagers, some who were dying from a mysterious condition. With this understanding came respect, admiration and the delightful passionate scenes based on a sincere feeling for the other I enjoy in a read/listen.

I like stories with an intriguing plot complete with love and passion. Where differences with seemingly insurmountable walls, but gradually dissolve, crumbling inches at a time until they are but ash. Author Ms. Loch has written a highland story with memorable characters and compelling plot where people hold grudges and paint all known enemies with the same stroke of hatred and prejudice.

Narrator Brian J. Gill was a pleasure listening to. He has narrated many medieval historical romances and brings an energy to the read with his brogue and character portrayals, providing greater understanding and depth of the characters.

Bottom line? I'm so happy I picked up this listen and I am sure to enjoy to the rest of the series.

So, I’ve read to 44% and there’s NOTHING romantic about this book, no thoughts, no wanting, no desire, no kissing, NOTHING! I don’t know why this is listed as romance because it’s not. And the book just goes on and on with all kinds of unnecessary crap. It took waaaay to long on the sickness of the village and it took the lives of likable and very young people. I just hate that. Just say they died, don’t introduce them and make the readers like them then kill them off, and leave all the old ones alive. Geez, William was only 10 or 11. WTH?

Needless to say, I’m done with this book. There’s no romance and the author killed off too many sweet characters. I have no idea how this book got 103 4 and 5 star reviews. Edit about 150 pages from this story and it might be worth reading but as it is it’s too long.

I know from other reviews there’s sex in this book but if there’s no sign of desire by 44% it’s got to be pretty stupid sex. Like, “oh, let’s plop a sex scene right here and call this a romance.” Ummm, NO!

I got this book through KU and I still feel like I paid too much. I left 3 stars for the main characters I liked, Ronan, Lia, Aiden, Connell, Robert and little William. It was the long drawn-out story I couldn't abide.

As to the narration: Brian J. Gill did a wonderful job. He read with emotion and male and female alike sounded just like they were supposed to. But even his narration couldn’t help this boring, boring book.

I really really liked this book. I didn't realize this was the second book in a series when I got it so I will definitely go back and listen to book 1. The story had everything I wanted in a highland historical. The narrators voice was delicious and the characters were fun and entertaining. I was sad when a few characters died and I wanted to kick the author in the shin for some of those deaths because they were treated as kinda "meh, shit happens here in medieval times". but overall i liked the book.

Author has done much research to make this story realistic. Issues of tinctures, tisanes, poultices, and medieval perception of illnesses gives realism to the story line. Especially fascinating were descriptions of armament, weapons, and siege "machines". I cannot forget the narrator Brian J Gill who reads with attention to dialects as well as gender.

How can you not wish the best for Ronan?

I loved Demon Laird. All the trials and tribulations that Ronan MacGrigor endured how could you not wish the best for Ronan even if Ronan tries to drive away anyone who gets to close to him. His distrust of all English prevents his healing on the inside. A healer and one in need of healing. A villain to beat all villains and sadness that had me reaching for a hanky. Brian Gill is a great narrator. His narration added to my enjoyment of this book. All good books need a narrator like Brian Gill to make the listen even better.

Love this book. One of my favorite writers at her very best. Very good read. The characters are well develop and give great dimension.