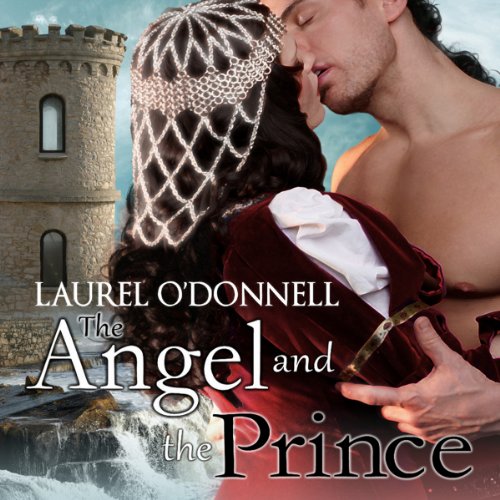 The Angel and the Prince

By: Laurel O'Donnell
Narrated by: Sherill Turner
Try for £0.00

In this exciting medieval romance, the French lady knight known as the Angel of Death wages a battle of wills and desires against her dreaded enemy - the English warrior known as the Prince of Darkness. Those who whisper her name in fear and awe call her the Angel of Death. She is a French warrior, dedicated to fighting the English. In place of glittering ball gowns, she wears shining armor. Instead of practicing the gentler arts, she wields a killing sword. He is an English lord known as the dreaded Prince of Darkness. He is sent by his king to find and destroy their most hated adversary - the French warrior known as the Angel of Death. Little does he know that his hated enemy is no man at all, but a beautiful woman who will challenge his heart and honor at every turn. Forced to choose between love and honor, the Angel and the Prince wage a battle of wills that challenges everything they have ever believed in.

What listeners say about The Angel and the Prince

Shouldn't the French speak with a French accent?

The story was interesting but having all the characters speak with the same English accent was disappointing. It would have been a four star book if the main female character who was French, spoke with a French accent. Then, when the French ruffians spoke, they had a cockney type accent, Hello, they are French!!!!

this book had me guessing what was going to happen next and i was turning page after page to find out. The characters were strong and determined to have their way in this story. A women warrior that commanded her own army, know as the angel of death, a prisoner that is determined to get free, know as the prince of darkness. all she wants is her dad to see her as an equal warrior as her brother and any man warrior, with problem start because of her feeling for the prince what will happen with her family, her country, honor. can she give up every thing to be in the arms of the enemy. what is she willing to go through to get her happy ending.Can the prince get past that she is the enemy and a loss of a love one by this war. I stayed up to finish this, the narrated Sherill Turner did a great job reading this and letting me feel like i was part of the story. Laurel O'Donnell is a great writer i have enjoy all of her books that i have read so far

Love this story, kept my interest while driving at night. I can't wait for another

Enjoyable and Exciting Despite Improbability

I truly enjoyed this although, honestly, I'm not sure I would have enjoyed it quite as much if I'd read it instead of listening to the audio. It was very long and I sit in front of a computer all day reading tiny lines of code, my poor eyes and head are losing their tolerance for long tomes such as this. Plus, I think the narrator did an excellent job. Some may nitpick about her not doing a French accent, but I'd rather forgo the accent than listen to one that is poorly done. Plus she really kept the listener engaged and added to the sense of suspense and excitement.

The setting is medieval. Sometime during the hundreds of years that France and England were trying to destroy one another. The story is action-packed and full of twists and turns that were not always predictable I was on the edge of my seat at times, unable to find a good stopping place so I could go to bed, etc. It all takes place in 5-6 months time, but so much happens that it's almost hard to believe. There are other things that are a bit unbelievable, but I was able to overlook them and still highly enjoy the story. Yet, I must quibble because I enjoy complaining. Plus if I wasn't emotionally engaged, I wouldn't care enough to bitch about it :)

The heroine, Ryen De Bouries (aka 'The Angel of Death') leads a French army against the English with her two older brothers under her command. Huh? I could have more easily swallowed that she was a knight under their command, yet highly regarded for her wit and strategic mind. When I think of a female knight, I can't help picturing Brienne from HBO's Game of Thrones who is as big as a man and would never be described as conventionally feminine. Ryen, on the other hand, is not very large. She's described as dainty and soft looking when not in armor and knows how to play the part of a Lady. She's skilled at swordplay and fighting, but relies on her wit more than her strength since she is not as strong as the male knights. I suppose it seemed more dramatic to the author to have her command the army that captured the infamous English Lord the Prince of Darkness, (Bryce Princeton). But I think it made the story less believable.

There were times when our "witty and cunning" heroine is TSTL. As a warrior who relies on brains not brawn, I think she should have been consistently portrayed as more sneaky and introspective about her actions than hot-headed or emotionally obvious. For example, why the heck didn't she just pretend she was still locked in her room when Bryce escaped her father's castle?! I fully expected her to do so. It's what I would have done. She'd have been off the hook. Also, she wakes up in an enemy stronghold after being unconscious for weeks. She's being fed and well tended, so I'd think a rational person would cool their heals and not immediately try to escape in bare feet with only a small dagger when they could barely walk a few steps before hurling due to head injuries. Still, I liked her and couldn't give her the dreaded TSTL tag. She was kind and very honorable, although after 5 years of war you'd think she'd be less shocked about the brutal realities of war. She stubbornly clung to a code of chivalry that everyone else seemed to follow at their convenience. Of course as the only woman, she had to be the best and follow the rules to the letter. That's how it works when you're in the minority.

The hero was the ultimate bad ass and could be swoon-worthy in his protectiveness toward Ryen and his love for his son. Still, there were times I wanted to smack the crap out of him. They both did a lot of wavering on their feelings for one another since they were enemies, but he was downright split personality at times. Ryen was much more consistent in her treatment of him than he of her. He could be flat out cruel. Also, I'm still torn on how I feel about his way of life. He lived in a castle that was dirty, smelly, and as far from civilized as you can imagine. He was hardly ever there, but when he did return I would have thought he'd try to straighten things up. The deal with letting the peasants starve unless they fought for food was possibly historically accurate, but off-putting. Like Ryen, I don't see how he could watch children starve, shrug his shoulders, and say 'only the strong survive'. Then again, that's probably how it was in medieval England. Peasants were basically chattel.