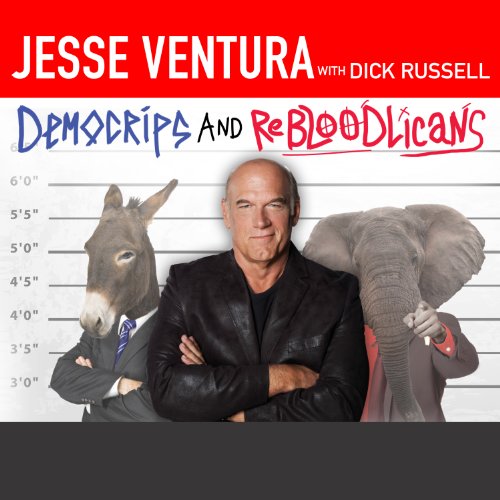 DemoCRIPS and ReBLOODlicans uncovers the truth about how corporations have bought the American electoral and legislative process through the power of lobbyists, campaign contributions, and political action committees. Using historical details, such as the development of the two-party system and the advent of third-party candidates throughout U.S. history, DemoCRIPS and ReBLOODlicans exposes how the two major parties have allowed corporations, businesses, and politically-motivated wealthy individuals to manipulate elections, bribe elected officials, and silence the average American voter.

Exposing the ineptitude and ganglike mentalities of both parties, Ventura advocates the replacement of the two-party system with a no-party system based on the ideals of our Founding Fathers. As election time rolls around, this is most certainly the book that should be looked to for reforming our electoral system.

Jesse's take on US politics

The title of the book comes from two famously brutal, rival gangs the BLOODS and the CRIPS. And this play on words implies one of the key points which the author repeatedly makes. That America's two party system is as much about the interests of the two main parties as it is about the interests of the American public. Infact he argues that US politics is much more about the interests of the two parties, their incumbent politicians and wealthy special interests than it is about the public who votes for them. There's nothing very controversial or new in making this claim. But the author does an excellent job of reviewing and analysing the facts. And as with all his books he takes what can be quite dry material, condenses it, infuses it with human interest and turns it into a work of literature which is an easy read, though none the less important for being so. For an overview of the state of America's political system and what can be done about it this book is an ideal choice. Well read by Johnny Heller.

Good if your into money trails

This book has good information in it and is well written. Personally I got bored trying to understand the econimics of politics and trying to grasp how the money filters around all the politicians and interest groups. That doesnt mean its not great, its just not my area of expertise and I found it hard to fully take in. The general points do come across well and overall im glad I read (listened to) it. I like his politics and this confirmed that he is smart and knows how the system works and its faults. Id definately vote for him!

Yes. It's important to understand the ties between government, corporations and wallstreet.

How government and and corporations work toward their bottomlines and not what's good for the constituents and consumers.

This is a very thought provoking book. While the references to gangs was a bit of a stretch at times, there were many examples of how Democrats and Republicans have worked to retain power rather than helping the nation.

The narrator is good, but I would have liked it more if Jesse did his own narration.

Buy Yourself some Influence or Get Screwed

Jesse says. the rich get richer, because they buy themselves the right members of the 2 Gangs, the Republicans and Democrat Party. He has got most of the facts right, but he really does not understand the root cause of all that corruption. We cannot fix the problem by getting rid of the 2 parties or changing to a multiparty system, a la Europe.

While Jesse supports Ron Paul for his push to reign in the Military/Industrial Complex, abolish Foreign Aid and Corporate Welfare; he is opposed to reforming entitlements or reign in excessive Union influence.

If American listen to this audio book The Revolution would start tomorrow! if you're fed up with our government this book will give you every reason to understand why you should be even more Fed Up.

Best book to open your eyes!!!

greet book to listen to while cooking and eating . lots to take in .

It agrees with what I have said all the time for years, that a two party system is ruining this country.

What other book might you compare DemoCRIPS and ReBLOODlicans to and why?

It is pretty original.

Which character – as performed by Johnny Heller – was your favorite?

How he backs up his opinion by showing that the founding fathers did not like the two party system.

I wish Jesse Ventura did all the narrating.

Interesting but Take with a Grain of Salt

Constant quotes without identification of the leanings of the quoters. I already know the untrustworthiness of the groups like the NYT, so, why would I believe any quotes from them?

Probably if he had a better book.

Yes, the refreshing part was that he did put both parties in the same boat. I would agree with him that they are co-conspirators in the downfall of our nation, and constitution.

Where does DemoCRIPS and ReBLOODlicans rank among all the audiobooks you’ve listened to so far?

Two wrongs don't make a right but it is great to hear that other countries are also corrupt, and not just South Africa where I live

Behind the scenes information that you don't hear on the news

How governments rip us all off

I really liked the way the author did not take sides as both parties are to blame for the problems that USA seems to have. As an outsider, it seems strange that you can't find better Presidential candidates out of all your Millions of people in USA