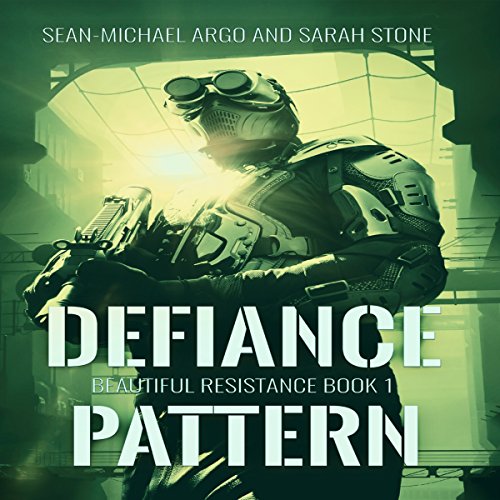 By: Sean-Michael Argo,Sarah Stone
Narrated by: Persephone Rose
Try for £0.00

High-tech mercenaries find themselves pitted against free-running revolutionaries as global corporate warfare becomes centered around a struggling island nation and the freedom fighters defending their home.

Hayden Cole is a slinger for the mega-corporation Union Americana, one of the hacker elite who wage info wars in the immersive virtual realm of MassNet. He has been assigned to a task force bound for the Philippines, where he is joined by an assortment of engineers, security operatives, and Laine 2.0, the Union's most deadly cyborg assassin. A new energy source which could yield a world changing new source of clean energy. Each of the primary corporate powers have sent task forces to the island, and economic competition turns violent as the opposing operatives race to find the source. Standing against all of them is a group of local resistance fighters with strange abilities and who may yet prove to be not quite human.

As slingers jack into MassNet to battle with kill programs, soldiers and cyborgs clash in the streets with blades and bullets, all to the backdrop of a world left behind by the progress of a neon future in this action-packed cyberpunk thriller.

What listeners say about Defiance Pattern

A great read for sci-fi and action fans

I really liked the setting of this story I have not read/listened to anything where hackers will battle each other whilst people are also fighting in the real world and I found it really refreshing. The characters are all likeable, each with distinctive voices preventing any confusion and the storyline kept going at a fast pace without losing its detail.

Overall I really liked this story and I will be looking out the for next installment.

Please note that I was provided with a copy of this audiobook to provide a non-biased review.

Downtime is for amateurs.

Having just finished the book, this reader's head is still spinning, trying to pull out of the chaos and madness of battle. Frenetic rather than fast, we follow a small team of the best of Union Americano, one of the three giant corporations straddling the world after the third war, who have been sent to secure a new power source from the Philippines. When they arrive, they find that both Asia Prime and EBlock are already there before them. And there is another group, too, agile and almost invisible - who are they?

Although several protagonists are introduced, and interact with each other, the story mostly follows the Union's top stringer, Hayden,as he defends against hacking attacks and battles with his counterpart in Asia Prime, and also Laine, a cyber enhanced killer who loves her work, with whom Hayden has often worked before.

The ending is sudden. There is a completeness to the story although it is obviously only the beginning of a series and it left this reader wanting more. My thanks to the rights holder of Defiance Pattern for gifting me a complimentary copy, at my request, via Audiobook Boom. As the book progressed, it became increasingly immersive and I look forward to continuing in the company of these increasingly beset and hard fighting techno protagonists in future books.

Not a bad effort.

Where does Defiance Pattern rank among all the audiobooks you’ve listened to so far?

About average............. it is not very unique many of the themes have been used by other writers.

definitely enjoyed this book! Rose did an awesome job with pulling you in. Worthy of your time.

I absolutely adored this book it knocked me off my feet and completely blindsided me as to how good it was.
I walked in expecting a Technological Science Fiction book and what I got was so much more it is Techno-Thriller, action, adventure, assassin, science fiction and mystery rolled into a book that flows from story point to point with stunning ease and flow.

The narration is amazing giving life to each and every character conveying a depth of emotion and gravitas that is sometimes hard to come by.

Unless you hate technological based stories I cannot think of anyone that could not find a part of this story to enjoy.
It is worthy of the time to listen/read and I implore you to give it a try.
I hope there is another instalment.

This was a decent sci-fi story about corporate espionage and super soldiers. The narration is very entertaining by Persephone Rose. I would have liked a bit more world building, but for what it was, it is pretty entertaining.

The story has an interesting concept, but feel like only 25% of the story was here. We learn about a strange power source and about an unknown group that seems to be protecting it, but that's it. 3 corporations are fighting over it using hacking and battle armored soldiers as weapons. The story ends with a battle and then the book is over. Obvious cliffhanger leading into book two. I feel the book should have been longer. The narration was good and you can hear the slight differences between characters. Well spoken and easy to understand. I recieved this book as a gift for my honest rating.

I enjoyed listening to this book. I agree with some of the other reviewers in that I feel like there were many things left out that could have really helped build out the characters and the world. I would have enjoyed some additional details about how the characters arrived in their situation, how the world got to be the way it was and some additional information about the characters backgrounds. It was still a good book with lively action scenes and some interesting takes on how battle in Virtual Reality might work.

The narration was good. Didn't fall off many times for me.

Overall, I liked this book and would definitely listen to a sequel.

I was given a copy of this book in exchange for my honest review.

The publisher's summary does a great job at highlighting the interesting aspects of this book but when you get to listening, it didn't quite hit the mark (for me). I felt like the world and setting was extremely interesting but I didn't feel like we got to focus on the characters and the more interesting aspects of the world as much as I would have liked. Instead, I felt like there was a lot of descriptive action sequences which were not all that interesting because I didn't really feel all too connected to the characters in them or an impact of the actions going on. Initially I was intrigued by the slinger virtual aspect but I really had a hard time with the visualization and terminology of the virtual world and the 'kill programs'... I get what the authors were trying to do but, personally, the descriptions and use of 'exe' filenames just felt empty and seemed to lack the impact I was expecting.

What did I most like about this book? For me, the world/setting and some of the characters have a ton of potential and, going in, I was extremely interested in learning more. Unfortunately I just didn't feel like my expectations were met. It wasn't a horrible listen and might appeal to some listeners/readers more than myself.

Narration was okay too. It was far from bad (I've listened to much worse) but I didn't feel there was much variation in character voicing (not necessarily a requirement for me to enjoy a narrator) and the action sequences just felt a bit off. Maybe it was just the writing prose? I'm not sure but I think the tone used by Persephone Rose was intended to add suspense to the action but for me it just fell flat and felt off.

Overall, i'd say it is worth a listen or read as there are a number of interesting aspects to this book. Perhaps you'll be able to overlook the issues I had with it.