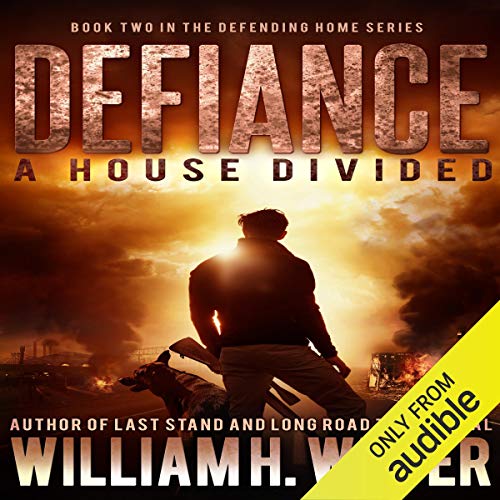 Dale Hardy thought he had seen the face of evil with Sheriff Gaines and Mayor Reid. That was before the cartel arrived and laid claim to a town still reeling from a devastating global virus. With Encendido falling increasingly in its iron grip, the cartel soon sets out to put an end to Dale and his family. To stop them, Dale will need to overcome sharp divisions at home and within the local population. More than that, he'll need to leave his fortified sanctuary in order to unite a fractured people against a ruthless enemy. But the time for mounting an effective resistance is quickly slipping away. There are rumors the cartel has called upon a bloodthirsty band of mercenaries to bring the town to its knees and complete their brutal subjugation once and for all.

What listeners say about Defiance

A great continuation of the Defiance storyline

Sometimes you wait too long between books and you forget what the heck is going on. That didn't happen here. Either Weber wrote the first Defiance book so well that I instantly remembered it or something else was going on. As soon as I got a couple paragraphs in, I knew exactly what was going on from the old book and what to expect in this book.

A House Divided was definitely a fast-paced book. No time was spent explaining who anyone was (the first book covered that) and most of the time the group spent fighting or preparing to fight. It was the perfect book to start off my 2017 review schedule.

Weber knows what he is doing in writing this story, I can tell that it's well researched and that he enjoys the outcomes. Just like the first Defiance book, House Divided ends on a cliffhanger. Honestly, I think this entire book was built up towards that cliffhanger ending and now I can't wait to see what happens in the next one.

To William, if you read this. Please keep using Kevin Pierce. He's easily my favorite narrator (especially for Post-Apocalyptic fiction). He is the perfect voice for this story.

Overall, House Divided had a lot of twists and turns and it checked all the right checkboxes for me. I really enjoyed it.

I received this book as a gift, this has not affected my review of it in any way.

If you enjoyed my review, please vote for it! If you'd like to see more like it you can check out BriansBookBlog DOT com.

Kevin Pierce does a great job bringing these characters to life but this second book in this series felt rushed. I hope the third book is better.

Can't wait for book 3. This series is great and the best part is narrator Kevin Pierce!

I am thoroughly enjoying this series. always exciting with twists and turns every where. kevin pierce is the best

Too formulaic for me. I am big fan of the genere and Kevin Pierce but this story is just to by the numbers for me. The heros are entirley too idealized and all the other characters are just cookie cutter. Plot twists and surprises are rare and seen from a mile away. The narrartion is what makes you in anyway involved with the story. There is a great story here but it just wasn't found in this writing

I would have kept the first book whole. As it is, the first book was obviously cut in half to make two 5-hour books. While the story line and performance is quite interesting and I would have certainly paid for the 3rd book simply for closure, I gave it a 3-star overall performance because of the disjointed way the books were sold. I'm sure that the reason this book didn't take off was nobody wanted to pay a full credit for half a book that is competing with better books in the 8-12 hour duration.

There wasn't any one thing I liked best. This series(?) was too predictable and had no closure, even for smaller subplots.

Kevin Pierce is one of my favorite narrator's and was the only reason I bought the first book. He brings a quality that fills in the blanks while not saying anything extra, simply through the way he reads.

No, too predictable to pay extra to see it on the big-screen.

There is no closure to any part of this series in the first or second book. The first book literally ends almost in the middle of a sentence. The second book is not much better, and now, the third book won't be on Audible at all so I wasted my time and money on two books and still have no closure to any part of the storyline! Fortunately, this is a rarity for Audible.com. I've bought more than 400-books and this is the first review I've written like this.
William Weber is certainly a talented writer but he shot himself in the foot with this disjointed series. Furthermore, while this series doesn't have that many reviews yet, alienating the few readers you do have in a system with literally tens of millions of clients is not the smartest thing to do.