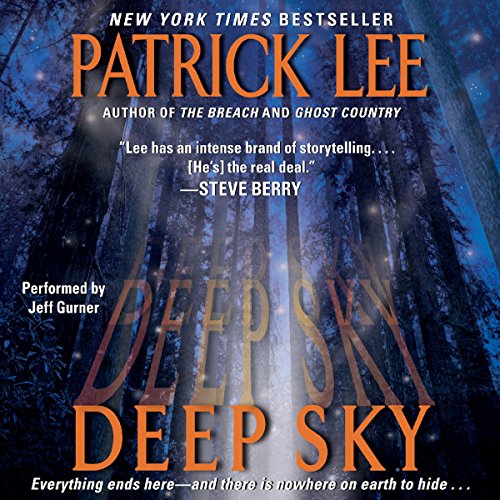 The anomaly called the Breach is the government’s most carefully guarded secret.

But there is another secret even less known... and far more terrifying.

As the U.S. President addresses the nation fromthe Oval Office, a missile screams toward the White House. In a lightning flash, the Chief Executive is dead, his mansion in ruins, and two cryptic words are the only clue to the assassins’ motives: “See Scalar.”

Now Travis Chase of the covert agency Tangent - caretakers of the Breach and all its grim wonders - along with partner and lover Paige Campbell and technology expert Bethany Stewart, have only twenty-four hours to unearth a decades-old mystery once spoken of in terrified whispers by the long since silenced. But their breakneck race cross-country - and back through time and malleable memory - is calling the total destructive might of a shadow government down upon them. For Travis Chase has a dark destiny he cannot be allowed to fulfill....

What listeners say about Deep Sky

Must listen to trilogy

Full of twists and turns. Keeps the listener gripped to the end. The range of voices helps the story flow.

If you haven't read The Breach, the first novel in this trilogy, it's definitely not worth reading this first…

These 3 stories can stand alone in their narrative, pace and ingenuity, but are far better as a whole! Patrick Lee is an ingenious author and someone whom I will follow eagerly!

Once again, you won't see this ending coming, but when you get there, it'll all make perfect sense!

I loved this book, it was so exciting, so well read, and fast paced. Now, everything is compared to it and nothing has come close

Third and last part of the trilogy

If you could sum up Deep Sky in three words, what would they be?

Great ending to the series

Sad to get to the end and hope there might be another in the series but as it finished so neatly probably won't be. It certainly is a thrill a minute like the other 2. Very Lee Child 😊👍

This plot just gets BIGGER and MORE intense...

If you could sum up Deep Sky in three words, what would they be?

The perfect finish to the whole storyline.

The questions left behind by "the Breach" and "Ghost Country" are all tied together into a coherent story that make sense on a bigger scale than I imagined before I read the book.

If you have read the first 2 books then you still have no idea what's coming or just how big the picture is really going to get...!

Get it you'll love it.

Patrick Lee has really brought it all together here. If you think about reading these books, please read from first to last so that you get the full impact of the various decisions - it's well worth it!!!

Have loved all three of these books. I hope there will be more. That's what they are like. You just can't get enough.

Sad to see the story end.

I've enjoyed this trilogy very much. The first two books are so different and unique - even from each other. The only reason I didn't give the book a 5 star rating for the story is that I was expecting something "more" from the ending. Even though I read other reviews that mentioned that the ending seemed somewhat rushed, it didn't keep me from reading the book. I just wish there had been a few more chapters.

It's still one of my favorite series and in about a year I will listen to all three books in a row and it might give me a different outlook on the ending.

Deep Sky" is the final novel in the series. It does a good job of winding up all the dangling strings left in 'Ghost Country" and even some left over from 'The Breach"

As a whole, I very much enjoyed the series and recommend it for a sic-fi/future history reader. Some romance but not too overdone, interesting tech thoughts kept me involved, the male and female protagonists were both well written as was the plot as a whole.

Well worth the credit.

I thought the ending was fitting and wrapped up the series very well. I hope Patrick Lee isn't done with Science Fiction. He has a lot of great ideas and this series proves it.

Which character – as performed by Jeff Gurne – was your favorite?

The lead of course.

As if written by Phillip K. Dick but directed by John McTiernan.

It's a shame that it's the end of the series. I would have carried on reading a few more of these storylines.

Satisfying Conclusion to the trilogy

You will want to listen to/read the first two books in this series before starting Deep Sky.

Deep Sky was a satisfying conclusion to the "Breach" series. Lee does a great job tying up several plot lines and filling in the blanks. I'm assuming this is the last book although there is potentially room for more. Lee's creativity is amazing and I'm sure he is a very intelligent individual. My one issue with his writing is his greatest strength, the ability to create tension and drama is sometimes his greatest weakness. There was a scene where Paige was approaching "someone" and had to be very quiet. Lee went on and on with "another step and another and another" ad nauseam. It took me out of the scene and made me think of "Happy Gilmore" when Chubbs was saying "Just tap it in. Just tap it in." "Tappy Tappy!!!"
Other than that issue (which exists in every book in the series), Lee is an incredible author and I'm hoping in future books he learns to be less liberal with his brush strokes when creating his art.
As always, Jeff Gurner did a great job narrating the book.

This is my first time reading Patrick Lee. Deep Sky was an Audible Sale Pick, based on previous books I have read. And I was super surprised. Could not put it down. One of those gets you right from the beginning books. Which are my favorite. If you like Sci-Fi, intrigue, secrets from the past and the future, this one is for you. [Smile]

Nice finish to the series

Sorry its over - really liked this series. If you liked the other two, you won't be disappointed by this one.

I enjoyed this book. The twists in the plot kept me guessing and made the listen enjoyable. I am ready for the next book from Mr. Lee.

First off this book is SHORT. Perhaps it didn't need to be as long as the previous two but it felt a little rushed and less detailed than the other two books. That's not necessarily a bad thing but I think it took a little bit away from this book.

Second, the ending was pretty awesome in some ways but I felt a little dissatisfied. I mean they didn't explicitly say "and then X happened" because it should be really obvious; I just felt a little empty like the story was missing a chapter at the end. Perhaps the writer was best stopping the book where he did...

It would be interesting to see if we could explore more stories in this universe but...well I don't want to spoil the ending here but I'm guessing the stories would have to be quite different. Still, I would love to see it.

A good read, but I expected a bit more.

If you start with the first in the series "The Breach" you may be a bit disappointed in this 3rd entry. Its still a great listen, but it has fallen off from the first and second.