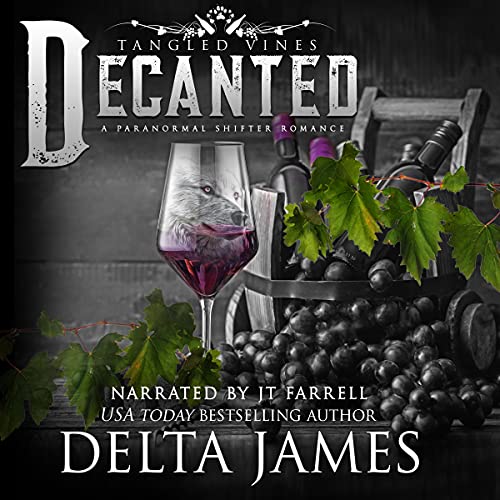 He only has plans to eradicate the Hunters...until he must chase down his fated mate.

The Hunters are becoming bold. Damian Steel has called a summit of all wolf packs along the Pacific Coast. When Hudson Rhodes arrives on the same motorcycle Steve McQueen once rode, he is expecting nothing more than to come up with a plan to eradicate the Hunters... turning predators into prey.

The last thing he expected to feel was the call of his fated mate. Shasta Warren, the bad girl of the Sonoma Pack, is only willing to be the mistress of her own destiny. But when the Hunters attack and Hudson sends her away to save herself, Shasta can't help but come to the brooding alpha's aid.

As Hudson recovers from his wounds, Shasta slips away to begin a secret new life in the Crescent City. But she won't be able to hide forever. The alpha of New Orleans is known as an incurable romantic and jumps at the chance to help his old friend, Hudson, bring his fated mate to heel.

Publisher note: Decanted is a paranormal shifter story with steamy heat in and out of the bedroom for mature listeners only.

What listeners say about Decanted: A Paranormal Shifter Romance

I loved the chase and the slow realisation of the fact this is destiny. These books aren’t always everyone’s taste but if you enjoy Deltas books you will love love love this one

A Wonderful continuation of the over arching story of the Shifters vs the Hunters! Hudson & Shasta's story is another thrilling ride. Luv Luv Luv it! I am sitting on the edge of my seat for the next Audio Book .....Breathe!

Shasta gave Hudson a run for his money with her behavior. She is an alpha and wanted a weak alpha she could control. That is not Hudson because he is totally alpha. The hunters are at it again and Hudson gets shot three times with silver bullets. The hunters also kidnap Shasta but I felt the story is taking a different turn with the hunters. The preview of the next book sets us up for this. I love that the alpha of New Orleans and his mate were in this book. JT Farrell did an outstanding job with the narration. I received this free copy audiobook at my request and have voluntarily left this review.

I love these paranormal stories. These wolf shifters are gruff and growly, and their fated mates send them on a merry chase.
These are sexy, spanky, alpha wolves at their best. Pure entertainment, and has depth of story and characters.

I’m so in love with this book!!

This is the next book in the Tangled Vines series. Shasta has no want or need to be mated. Her dreams of a graphic design company are coming together and hopefully she can set up in a new town. That dream dies when Hudson discovers his fated mate. No matter how hard she runs or how far she goes, she will be his.
Delta can spin a story that pulls you in and doesn’t let go! JT. Is a master of voices and inflection! They truly are a dynamic duo!
Incredible book!

Another Sexy and Action packed book by Delta James

I love this book that is filled with deadly hunters, lies kidnappers, a shifter unexpectedly finding his fated mate. and a female shifter that doesn't want a strong alpha mate. There's never a dull moment in this story. Shasta is an alpha female that only wants to a answer to herself. I found it extremely fascinating to watch Shasta grow so much as the story progresses. Hudson is ready to to take on the wild side of Shasta. I also enjoyed revisiting with the alpha of New Orleans and his loving but scheming wife. There are funny moments as well as hot steamy sexual ones. This is definitely a book that I'll listen to again.

JT Farrell brings this book to life. I find it relaxing when I listen to a audiobook and enjoy it from beginning to end. Mr. Farrell allows the listener feel the emotions of these characters. I highly recommend this Audible book for your listening pleasure.

First I have to say I love when Delta James lets loose this one packs a punch, oh i am loving this new series this one was a mouth-watering panty-dropping Devilishly sexy edition to this new series what more can i saw delta james has done it again with this beautiful story.
Narrated by: JT Farrell wow JT was so wonderful his performance just sucks you in and hold you tight until the very last word.