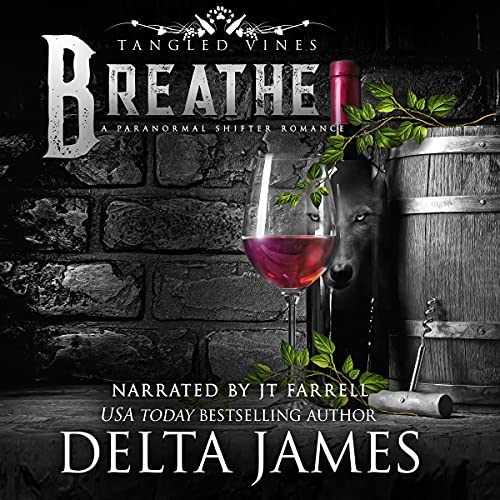 It should be easy when the Alpha of Otter Crest decides to claim his fated mate. The only problem is...she’s hunting him.

Ethan Storm had survived more dangerous missions than most men. It was only after he was mugged and his life hung in the balance that he was turned by one of his men.

Returning home, Ethan had hoped to be able to resume his relationship with the love of his life, Marissa Prentiss.

The only problem is that with the exception of her sister, Marissa’s family has become entrenched with those that hunt the wolf-shifters. When her sister is murdered, Marissa joins the Hunters and vows to end those of Ethan’s kind.

When new information regarding her sister's death comes to light, can Marissa bring the real villains to justice and find her own happily ever after with the only man she ever loved?

Publisher note: Breathe is a second chance, paranormal shifter romance with steamy heat in and out of the bedroom for mature listeners only.

What listeners say about Breathe

Delta hits it out of the park again, this was everything I had hoped for the characters felt fresh and unique and I loved the snark between these characters. An absolute must listen if you love Delta’s writing

Another WONDERFUL addition to the Tangled Vine Series!
This is the Story of Aplha Ethan Storm and his fated mate Marissa!
I love that these stories are not just about the MCs, but also the fact that something suspenseful is also occurring.
I also love that characters from previous Tangled Vines books make an appearance!

Marissa was a very strong woman and once she learns the truth about her father and the hunters, a group she was a member of, she sets out to destroy each one of them, including her father. This was for justice for her sister's death. I hate what happened to Ethan in the beginning just before he was leaving his military service to return to Marissa. He stayed away from Marissa, who he loved. I was glad that years later, he goes in search of her and to protect her because the hunters knew it was her. As always, JT Farrell did an outstanding job with the narration. I received this free copy audiobook at my request and have voluntarily left this review.

I love Delta James shifter books and this is one that will capture your attention from beginning to end. The beginning of Ethan and Marissa's fated mates love story is heartbreaking. Both take difficult separate paths for a long while. I was entranced by Marissa and how she changes when she learns the truth. I was happy when they finally were reunited but their journey won't be an easy one. Delta adds so many different obstacles that there is never a dull moment. Now are JT Farrell's voice and the book becomes even more exciting. He does an outstanding job of conveying the emotions of these characters. I highly recommend this Audible book. This story is full of intrigue, adventure, funny moments and off of the charts sexy love scenes. Thank you Delta James for another tantalising shifter story.

Delta James has done it again i loved this story so much Ethan ,Marissa was smoldering hot they molded so seamlessly together this story was definitely intoxicating from one ravenous word to the next it was Intense drama, thrumming tension, electrifying suspense and fierce danger that spirals into intriguing passion that sucked me in so deeply until the heat and electricity shot through my veins .
Narrated by: JT Farrell
Wow JT has the sexiest voice it smoldering he draws you in to the story i love his voice.