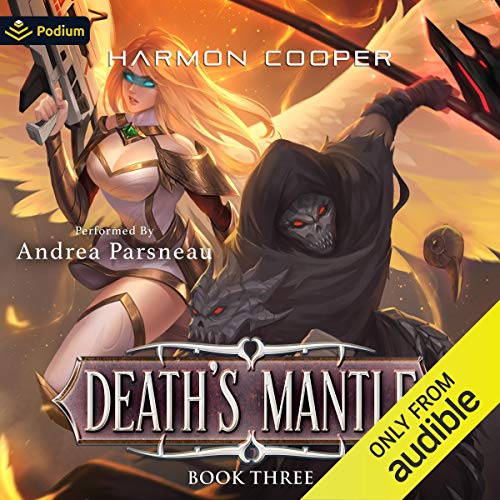 By: Harmon Cooper
Narrated by: Andrea Parsneau
Try for £0.00

Everything is about to change for Lucian North.

With a series of death dates looming, Lucian needs to get creative to save his brother and his family. He will have to call upon his friends and former foes to get the job done, which will open him up to more complications, Lucian plunging head first into issues that have been plaguing the Progenies of Light and Death for thousands of years. Lucian will have to get creative, and there will come a point where he will have to get ruthless.

The sudden passing of someone close to him leaves Lucian in a tailspin, only exacerbated by a confession he’s made that rocks the very foundation he is building. Picking up the pieces, Lucian has no other choice but to move forward, to level up once and for all, and to kill the parasite that plagues his brother and has extended itself to his family, or lose it all. Because that is what is at stake here.

With one false move, Lucian risks not only his family, not only the lives of those he cares for in the spiritual realm, but also his very existence.

Death’s Mantle is a dark fantasy LitRPG series written by Harmon Cooper, the best-selling GameLit author of Way of the Immortals, House of Dolls, Cherry Blossom Girls, The Feedback Loop, and Monster Hunt NYC. It was inspired by the anime Parasyte, the comic book series Sandman and Spawn, On a Pale Horse, and the Tibetan Book of the Dead. This is the third and final book in the series.

What listeners say about Death's Mantle 3

what a way to end an awesome trilogy, this one is the most action packed books of the trilogy, written perfectly

This series not only gets better and better it feels original and fun. I just enjoy the story and the characters and they grow and grow on me . I recommend this series and I enjoy it . This entry really furthers the story and is amazing . If you enjoyed the first two you will enjoy this one as well and this one is awesome.

This book is an excellent addition to the series. I highly recommend this book.