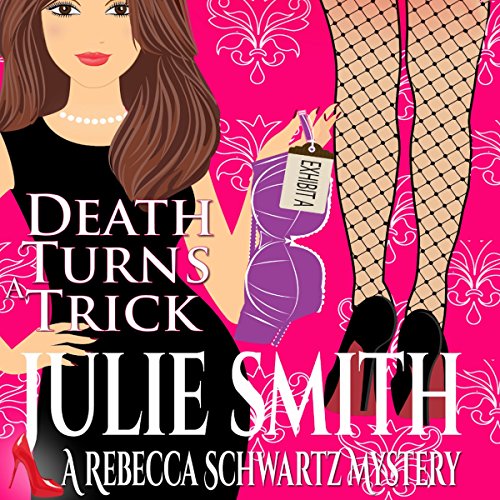 The first book in a cozy series by an Edgar Winner

A rollicking tale of murder, romance, and a bordello….

Rebecca Schwartz, nice Jewish lawyer with a few too many fantasies, is happily playing the piano in a whorehouse when she suddenly finds herself assigned to make sure a near-naked state senator escapes a police raid. That dirty job done, a lovely evening turns even more delightful when she's picked up by the cops and spends the next two hours at the Hall of Justice. Could this day get any worse? Of course! Guess who arrives home to find a dead hooker on her living room floor?

Handsome Parker Phillips, Rebecca's new beau and the most attractive man she's met in ages, is arrested for the murder. (Worse, she suspects he might actually have done it.)

On the plus side, another very attractive man is following the case - reporter Rob Burns of the San Francisco Chronicle, a possible ally. And there are other possibilities.

Fans of Janet Evanovich, Stephanie Bond, and Elizabeth Peters will get a kick out of this one.

"Funny and witty, with a clever, outspoken heroine." ( Library Journal)

What listeners say about Death Turns a Trick

I enjoyed the narrator and the story. I was kept guessing who the killer was until the end. I will definitely continue with this series.

This is a pretty good mystery. It's a bit dated but the plot is entertaining and the characters are well developed.

A fast-paced mystery with unusual characters and lots of twists

Imagine a young modern madam with a cast of young and mostly intelligent working ladies. The madam is represented by Rebecca, a young lawyer whose father is a famous attorney. The location is San Francisco and Marin County (excellent descriptions of Marin's county).
Prominent citizens in SF, a feminist association promoting legalization of prostitution patronized by a senator and his wife.
A grizzly murder in Rebecca's apartment starts the plot and throws many suspects, theories, possible motives including blackmail, money found in a potted fern.
Add to the mix a not too friendly cop, and a crooked cop. An innocent young man in jail for the murder.
The story keeps you guessing until the end...
Note that Rebecca's mother is upset that Rebecca played the piano in the bordello clad in a skimpy attire.

This is the first book that I have read by this author and I was very pleasantly surprised. You never know if you are going to enjoy an author or not but I would definitely read more from Julie Smith!