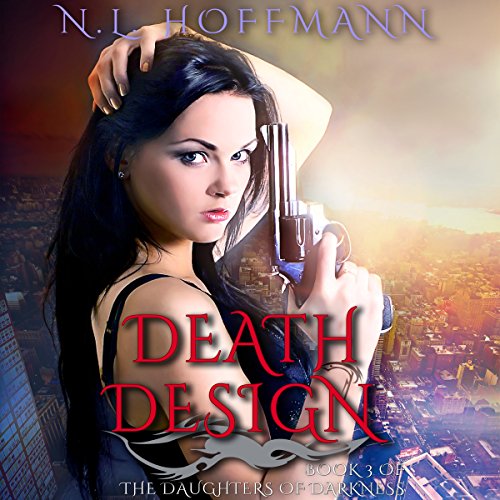 Sin Noble is the president's personal assassin, due to her unique ability to kill. What most don't know is, he's also her brother, and not at all the cuddly or loving kind, either. After surviving a difficult childhood and life on the streets, she adapted to her murder-for-hire lifestyle by going against nature and using her reaping powers to take enemies of the president before their time. As Death incarnate, Sin has the unique ability to alter the Death Design - the pattern that decides who should die, and when.

But tempting fate doesn't come without a price. Or a questionable relationship with alcohol.

When she is sent by her brother to assassinate a suspected blackmailer, Sin soon realizes that the situation is more complicated than he let on. She is partnered with another employee of the president, Liam Sanders, whom she hates with a passion. When push comes to shove, that passion soon turns into something her hormones can't refuse, and Sin can't live without.

Constantly running up against her supernatural fathers and sarcastic sisters, Sin's tangled web of a mission reveals that The Covert is once again preying on all of the world's inhabitants. Sin is desperate to discover the truth before she decides to take another life outside the Death Design. Will she be able to accomplish the impossible, while being pursued herself by mysterious dark forces? One thing is certain: no can escape their destiny. All will be revealed in the Death Design.

What listeners say about Death Design

I enjoyed this story very much. As out there as it was written; one can identify with the theme and inner struggles facing the main character. I loved the "A D D" nature of the main character via her internal dialog. It seems that all families are touched with it--in all walks of life. I loved the banter and humor of all the characters. It brought smiles and chuckles and even laugh out loud moments. I couldn't put it down or stop listening.

I heard all three books and loved each one. There really is someone for everyone out there. One just needs to look.